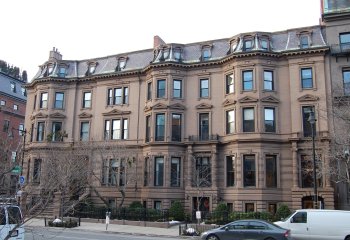 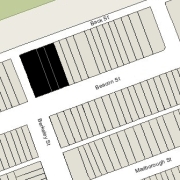 Originally, all three houses had front stairs and entrances on the first floor, with the stairs extending to the sidewalk. This design violated the building restrictions contained in the original deeds of land from the Boston and Roxbury Mill Corporation, which specified that “bow or swell fronts, porticoes, balconies, steps, eaves, and bay windows or similar structures” were permitted to project no more than three and one-half feet south of the main façade of the buildings. On March 17, 1860, the Corporation entered into agreements with the owners permitting the steps to extend to the south edge of the lots.

126 and 128 Beacon were remodeled, probably in the early 1900s, so that the entrances were lowered to street level. In his Houses of Boston’s Back Bay, Bainbridge Bunting notes that entrances at street grade were “made possible by the construction of a new sewer system in 1884 which protected the basement against flooding in times of high tide.” The entrance to 130 Beacon remained unchanged.

On June 16, 2003, Rockwood/Beal I, LLC, formed by The Beal Companies LLP, real estate developers, purchased 126-128-130 Beacon from Emerson College. On September 13, 2005, it converted the property into eleven condominium units, the 128 Beacon Condominium. 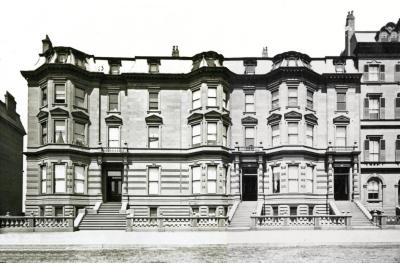 126 Beacon was built in 1859-1860 by Standish & Woodbury, masons, as the home of John Jeffries, Jr., and his wife, Anna Lloyd (Greene) Jeffries, on land with a 33 foot frontage he purchased from the Boston and Roxbury Mill Corporation on January 4, 1859. They previously had lived at 7 Chestnut. 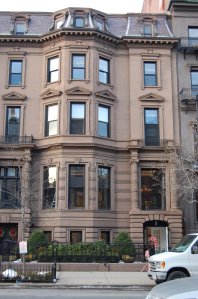 Click here for an index to the deeds for 126 Beacon, and click here for further information on the land on the north side of Beacon, including the Storrow Memorial Embankment on the Esplanade.

John Jeffries was a real estate dealer.  His father, Dr. John Jeffries, was an eye surgeon who, with Dr. Edward Reynolds, founded a charitable eye clinic, the predecessor of the Massachusetts Eye and Ear Infirmary.

John Amory Jeffries, a physician, married in September of 1889 to Emily Augusta Eustis and they moved to 3 Exeter.  William Augustus Jeffries, a real estate dealer in his father’s firm, married in April of 1893 to Clémence Eustis, the first cousin of John A. Jeffries’s wife. Emily Augusta.  After their marriage, William and Clémence Jeffries lived at 126 Beacon with his parents. 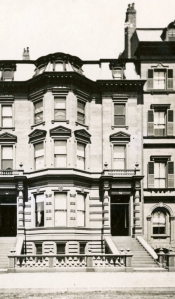 John Jeffries, Jr., died in December of 1897.  Anna Jeffries continued to live at 126 Beacon with their son, Walter, and son and daughter-in-law, William and Clémence.   Walter Jeffries, who had been a real estate dealer in his father’s firm, died in August of 1898, and Anna Jeffries died in January of 1900.  By the 1900-1901 winter season, William and Clémence Jeffries had moved to 236 Marlborough. 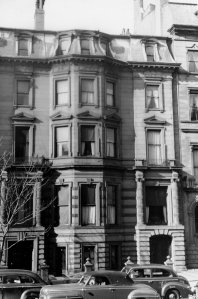 On February 17, 1902, 126 Beacon was acquired from the estate of Anna Jeffries by Horatio Appleton Lamb. He and his wife, Annie Lawrence (Rotch) Lamb, made it their home. They previously had lived at 86 Marlborough.  They also maintained a home in Milton.

Horatio Lamb was a former wholesale dry goods merchant.  He served as treasurer of Simmons College.

In April of 1912, Horatio Lamb applied for (and subsequently received) permission to remodel an existing “dwelling and stable” at the rear of the property into a “dwelling and automobile house.” The remodeling was designed by architects Kilham and Hopkins.

On December 23, 1943, 126 Beacon was acquired from Annie Lamb by Emerson College, which combined ot with 128-130 Beacon which the College already owned.

128 Beacon was built in 1859-1860 by Standish & Woodbury, masons, as the home of wool merchant and wholesale grocer Francis Cogswell Manning and his wife, Abby (Howard) Manning, on land with a 27 foot frontage he purchased from the Boston and Roxbury Mill Corporation on January 4, 1859. They previously had lived at 55 Chauncy. 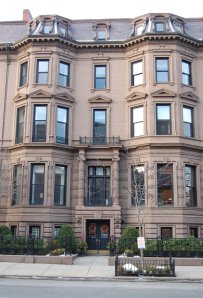 Click here for an index to the deeds for 128 Beacon, and click here for further information on the land on the north side of Beacon, including the Storrow Memorial Embankment on the Esplanade.

Francis Henry Manning married in October of 1870 to Charlotte Barrett Vose.  After their marriage, they lived at 128 Beacon with his mother and sisters.  They all continued to live there until 1874.  Francis and Charlotte Manning moved to 126 Charles, and Abby H. Manning, Annie Manning, and probably Abby S. Manning traveled abroad.  By 1878, Abby Manning and her daughters were living at 129 Commonwealth.

On August 10, 1874, 128 Beacon was acquired from Abby Manning by leather and hide dealer Albert Thompson. He and his wife, Lucy C. (Hopkins) Thompson made it their Boston home. They also maintained a home at Beach Bluff in Swampscott.

In June of 1875, he applied for (and subsequently received) permission to build a stable at the rear of 128 Beacon.

The Thompsons two surviving children – Albert Harris Thompson and Nellie L. Thompson – lived with them. Albert H. Thompson was associated with his father’s leather and hide business and moved to New York City in about 1882, where he represented the company.

Albert Thompson died in September of 1882 and 128 Commonwealth was inherited by his son and daughter. Lucy Thompson and Nellie Thompson continued to live at 128 Beacon during the 1887-1888 winter season, but moved thereafter and by the 1889-1890 season were living at The Imperial at 308-310 Commonwealth. Albert H. Thompson returned from New York in about 1888 and lived in an apartment at 16 West Cedar. He was unmarried.

In November of 1887, the Thompson family offered 128 Commonwealth for sale through real estate dealer John Jeffries, their neighbor at 126 Beacon.

On February 28, 1888, 128 Beacon was acquired from Albert H. Thompson and Nellie Thompson by Daniel Lake Demmon. He was an investor in copper mining, coal, railroads, and real estate, and served as treasurer of the Franklin Mining Company. He also maintained a home in Weston.

Abby Demmon went to India in 1889 as a teacher in the Ramabai school, organized by Pundita Ramabai with the support of the American Unitarian Church as an educational home for child widows.  Abby Demmon subsequently married William R. Gardner and, by 1908, they lived in Egypt where he worked with the blind.

Fannie Demmon married in October of 1899 to Barnabas Thacher Morrison, an executive with the Reading Rubber Company.  After their marriage, they lived with her father.

Daniel Demmon and the Morrisons lived at 128 Beacon until his death in February of 1908.

After his death, Barnabas and Fannie Morrison made the Weston estate their home (in 1927, she sold it to the Sisters of St. Joseph of Boston for use as a Catholic women’s college, Regis College).

On August 15, 1908, 128 Beacon was acquired from Fannie Morrison by Marion Wells (Cumings) Bemis, the wife of Frank Brewer Bemis. They previously had lived at 270 Clarendon.  They also maintained a home in Beverly Farms.

Frank Bemis was a banker and a noted book collector.

They continued to live at 128 Beacon during the 1917-1918 winter season. By 1919, they had made Beverly Farms their year-round home but continued to own 128 Beacon, leasing it to others.

During the 1918-1919 winter season, 128 Beacon was the home of real estate dealer Reginald Boardman and his wife, Carrie Louise (Munn) Boardman. They also maintained a home, Chubbs, in West Manchester, which previously had been their year-round residence. By the 1919-1920 season, they had moved to 73 Marlborough. 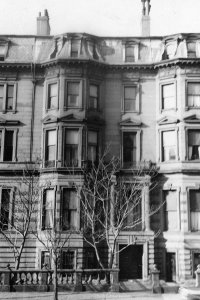 During the 1919-1920 winter season, 128 Beacon was leased by Percy Vickery Hill, a book publisher, and his wife, Edith (Raymond) Hill.  Their primary residence was in Augusta, Maine.

By the 1920-1921 winter season, it was the home of Franklin Warren Hobbs and his wife, Jane Hallet (Whitman) Hobbs. They previously had lived at 175 Beacon.  Franklin Hobbs was president of the Arlington Textile Mills.

Franklin and Jane Hobbs continued to live at 128 Beacon during the 1927-1928 season, but moved thereafter to an apartment at 192 Commonwealth.

On February 16, 1928, 128 Beacon was purchased from Marion Bemis by Almeda (Bagley) Myers, the wife of retired leather dealer John Woods Myers. They previously had lived at 158 Mt. Vernon. They also maintained homes in Dedham and Kennebunkport, Maine. They continued to live at 128 Beacon in 1931, but moved soon thereafter.

On March 30, 1934, 128 Beacon was acquired from Almeda Myers by Emerson College of Oratory (later Emerson College). It combined the building with 130 Beacon, which it had acquired the previous year. In addition to having classrooms and offices, 128 Beacon also was the home of Jessie (Eldridge) Southwick, the widow of Henry Lawrence Southwick, who had died in January of 1932.

Henry Lawrence Southwick had graduated from Emerson College in 1887 and became a financial partner of its founder, Charles Wesley Emerson, in 1889.  He taught dramatics at the college and later formed a Shakespearean company composed of himself and Emerson students.  In 1900, Henry and Jessie Southwick had joined with William H. Kenney to purchase the school from Charles Emerson.  He served as its president from 1908 until his death in 1932.  Jessie Southwick and their daughter,  Ruth, both taught at the college. 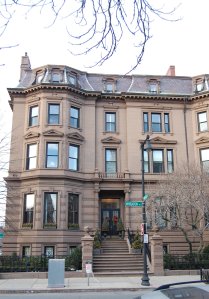 130 Beacon was built as the home of investment banker and railroad president Horatio Hollis Hunnewell and his wife, Isabella Pratt (Welles) Hunnewell, on land with a 57 foot frontage he purchased from the Boston and Roxbury Mill Corporation on January 4, 1859. They previously had lived at 24 Mt. Vernon.

Click here for an index to the deeds for 130 Beacon, and click here for further information on the land on the north side of Beacon, including the Storrow Memorial Embankment on the Esplanade.

They also maintained a home, Indian Farm, in Wellesley (when the town — formerly West Needham –was formed in 1881, it was named in honor of Isabella (Welles) Hunnewell’s family).

H. Hollis Hunnewell began construction of the house in the fall of 1860, but (according to Life, Letters, and Diary of Horatio Hollis Hunnewell by his grandson, Hollis Horatio Hunnewell), “owing to the war, work was delayed and it was not finished until the summer of 1862.” 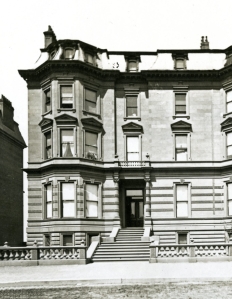 Isabella Hunnewell died in June of 1888, and H. Hollis Hunnewell continued to live at 130 Beacon and in Wellesley. After his wife’s death, he often was joined at 130 Beacon by one or another of his children.

During the 1888-1889 winter season, he was joined by his son-in-law and daughter, Robert Gould Shaw and Isabella Pratt (Hunnewell) Shaw.  Their usual Boston residence was 151 Commonwealth.  A former architect, Robert Gould Shaw was a trustee of estates.  They no longer were living at 130 Beacon by the next season, but once again lived with him during the 1895-1896 season.

By the 1896-1897 winter season, H. Hollis Hunnewell was joined at 130 Beacon by his son-in-law and daughter, Francis Williams Sargent and Jane (Hunnewell) Sargent.  Their usual Boston home was 40 Hereford.  Francis Sargent was a cotton merchant.  They continued to live at 130 Beacon during the 1898-1899 season, but then moved back to 40 Hereford. 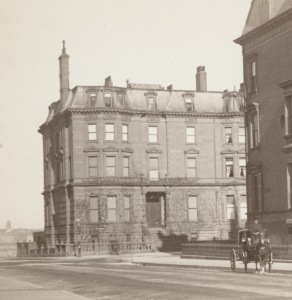 During the 1899-1900 winter seasons, H. Hollis Hunnewell was joined at 130 Beacon by his son, banker Walter Hunnewell, a widower.  His usual Boston home was 261 Commonwealth. H. Hollis Hunnewell spent the 1900-1901 winter season in Wellesley, where he continued to live until his death in May of 1902. Walter Hunnewell lived at 130 Beacon during the 1900-1902 season, but resumed living at 261 Commonwealth thereafter.

On October 6, 1902, 130 Beacon was purchased from H. Hollis Hunnewell’s estate by Julia (Gardner) Coolidge, the wife of attorney Joseph Randolph Coolidge. They previously had lived across the street at 147 Beacon.

Their son, Archibald Cary Coolidge, a professor of history at Harvard, lived with them.

In about 1916, they were also joined by their son and daughter-in-law, John Gardner Coolidge and Helen (Stevens) Coolidge.  He was retired from the US Diplomatic Corps, having served in France, China, Mexico, and Nicaragua.  In 1915, they had lived at 304 Berkeley, and by the 1917 they had moved to 35 Commonwealth. 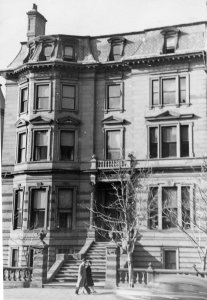 Julia Coolidge died in January of 1921.  Joseph Coolidge continued to live at 130 Beacon until his death in November of 1925.

Archibald Coolidge inherited 130 Beacon and continued to live there after his parents’ deaths. He also maintained a home at Squam Lake in Maine.

Archibald Coolidge died in March of 1928. In his will, he named Harvard College as the residual beneficiary of his estate, which included 130 Beacon. 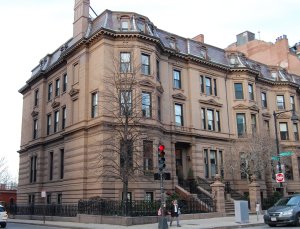