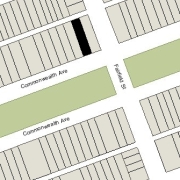 245 Commonwealth was designed by William Whitney Lewis, architect, and built by William H. Sayward, builder, in 1877-1878 for East India shipping merchant Nathaniel Henry Emmons, Jr., and his wife, Eleanor Gassett (Bacon) Emmons. They previously had lived in Jamaica Plain. They also maintained a home in Falmouth.

Eleanor Emmons is shown as the owner on the original building permit applications for the house and a stable, dated June 13, 1877, and on the final inspection report, dated December 31, 1878.

Nathaniel Emmons had purchased the land for 245 Commonwealth on December 1, 1870, prior to his marriage in June of 1871 to Eleanor Bacon, and transferred the land to her on May 17, 1877. He also owned the lot to the west, where 247 Commonwealth would be built. In March of 1878, as his home at 245 Commonwealth was nearing completion, he sold the lot at 247 Commonwealth to Uriah Coffin, who built his home there. Narhaniel Emmons purchased both lots from a real estate investment trust formed by John Templeman Coolidge, Franklin Evans, and Charles Henry Parker. The lot was part of one of several parcels the trust purchased from the Boston Water Power Company on January 29, 1866. The trust subsequently subdivided the parcels into lots, which it sold to investors and builders, who then frequently resold the lots to others.

Click here for an index to the deeds for 245 Commonwealth, and click here for further information about the land between the north side of Commonwealth and Alley 427, from Fairfield to Gloucester.

During the 1885-1886 winter season, the Emmonses were living elsewhere and 245 Commonwealth was the home of William Eliot Sparks and his wife, Harriet Augusta (Mason) Sparks.  They had lived at 183 Commonwealth during the previous season.  Their primary residence was in Taunton, where he was associated with his father-in-law’s machine works and where he died in September of 1886.

During the 1890-1891 winter season, the Emmonses were traveling abroad and 245 Commonwealth was the home of George Lombard Williams and his wife, Anna (Addicks) Williams.  Their son, Gibson Tenney Williams, lived with them.  George Williams was a leather merchant in Buffalo, and Gibson Williams was a student at Harvard in the Class of 1891.

Nathaniel and Eleanor Emmons were living at 245 Commonwealth again by 1891-1892 season.

: Architect’s rendering of the library at 245 Commonwealth; American Architect and Building News, 5Apr1879

Robert Wales Emmons married in February of 1896 to Helen Brooks and they moved to 91 Beacon.  He was a member of his father’s shipping firm and later would become a banker and broker.

Richard Dudley Sears was a real estate trustee.  In 1881, he had been the first American men’s singles champion in lawn tennis, and was the winner of that title for each of the six following years.

In May of 1901, the Searses purchased and subsequently moved to 232 Beacon.

By the 1901-1902 winter season, Nathaniel Emmons and his five unmarried children were once again living at 245 Commonwealth.

Mary Ann Wales Emmons married in June of 1905 to John Parkinson, Jr., a stock and bond broker, and they subsequently lived with his father at 160 Beacon.

Susan Emmons, married in October of 1907 to attorney Irvin McDowell Garfield, son of President James A. Garfield. At the time of their marriage, he was living at the Tennis and Raquet Club at 927 Boylston. After their marriage, they lived in an apartment at 409 Marlborough and then at 355 Beacon.

Nathaniel Franklin Emmons, a wool merchant, married in November of 1907 to Elizabeth Prescott Lawrence of Groton. After their marriage, they lived in Concord, Massachusetts.

William Bacon Emmons left Harvard in February of 1902, shortly before his graduation, to become a cattle rancher in Laramie, Wyoming. In August of 1902, he married Harriet (Hattie) E. (Crow/Crowe) Crandell Balch, the former wife of Alfred W. Crandell and the widow of Henry Gordon Balch, who had died in February of 1901. Henry Balch had been a rancher and banker in Laramie, in partnership with Daniel Carpenter Bacon, who was William B. Emmons’s first cousin, once removed (William Emmons’s maternal grandfather, William Benjamin Bacon, was the brother of Daniel Carpenter Bacon’s father, Ebenezer Shepard Bacon). William and Harriet Emmons divorced and in about 1907 he moved to Pomfret, Vermont, where he purchased Cloudland Farm, a 2,000 acre farm where he raised Jersey cattle, Southdown sheep, and Berkshire pigs, and produced maple syrup. In April of 1912 he married again, to Margaret (Daisy) Young of 285 Beacon and Weston.

Nathaniel Emmons died in April of 1926, and Channing and Eleanor Simmons moved thereafter to Brookline.

The property subsequently changed hands and appears to have been unoccupied. It was not listed in the 1927-1930 Blue Books, nor in the 1927-1930 Lists of Residents, and was shown as vacant in the 1930 City Directory.

In June of 1930, Edward Ball applied for (and subsequently received) permission to convert the property from a single-family dwelling into six apartments, including expanding the fourth floor and modifying the roof.  The remodeling was designed by architect Albert J. Carpenter.  Architectural plans for the remodeling — including a front elevation and floor plans — are included in the City of Boston Blueprints Collection in the Boston City Archives (reference BIN P-78).

On November 12, 1930, 245 Commonwealth was acquired from Edith Ball by Charles Hemenway, and on December 17, 1931, the Institution for Savings in Roxbury and Its Vicinity foreclosed on its mortgage to Charles Hemenway and took possession of the property.

By 1935, the bank had converted the property into four apartments.

In March of  1947, Louis Lissack filed for (and subsequently received) permission to convert the property from four to five apartments.

On February 14, 1955, 245 Commonwealth was purchased from Louis Lissack’s estate by Sylvan A. Goodman and his wife, Harriet (Wilinsky) Goodman. They had lived in one of the apartments since about 1937. He was an attorney and, from 1943, she was an executive with Filene’s department store, serving as fashion director and later as director of sales promotions.

They continued to live at 245 Commonwealth until about 1961, when they moved to 51 Beacon.

On February 28, 1961, 245 Commonwealth was purchased from the Goodmans by Ellen (Humphreys) Hackett, the wife of Philip (born Elias Philip) J. Hackett, a pharmacist. They lived in one of the apartments. They previously had lived in Cambridge.

On March 29, 1962, she transferred the property to herself and her husband as trustees of the 245 Commonwealth Avenue Trust.

Philip Hackett died in February of 1987, and on July 1, 2002, Ellen Hackett transferred the property back into her own name. She died in June of 2005.

On February 28, 2006, 245 Commonwealth was purchased from the Hacketts’ daughter, Linda S. Hackett, by Edward J. Tutunian, trustee of the Adams Street Realty Trust.

In March of 2014, it filed for (and subsequently received) permission to remodel the house, converting it into two units. As part of the remodeling, the top floor front was modified to add a dormer and modify the roof in a manner sympathetic with the original design of the house. The remodeling was designed by architect Thomas Trykowski of Silverman Trykowski Associates.

Below are architectural renderings of the front façade of 245 Commonwealth submitted to the Back Bay Architectural Commission in 2014, showing (on the left) the façade as it existed in 2014 (remodeled in 1930) and (on the right) the proposed new façade (subsequently approved by the Commission and constructed); courtesy of Silverman Trykowski Associates.