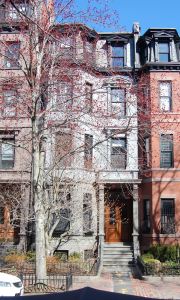 Daniel Beckler was a builder and lumber dealer. At about the same time as he acquired the lots on Marlborough, he also became proprietor of Beacon Park, a trotting park and race track in Allston, and by 1875 he also owned a stable in Hancock Square in Charlestown. He and his wife, Julia A. (Judkins) Beckler, lived in South Boston in 1874 but moved soon thereafter to Winter Hill in Somerville. They also owned a home in Northfield, New Hampshire, where he raised thoroughbred horses.

Julia Beckler purchased the land on which he built 317-319 Marlborough on January 1, 1874, from Frederick B. Pope, an architect and builder who built a number of houses in the Back Bay during the early 1870s.  Fred Pope had acquired the land on March 11, 1872, from real estate investor Charles Uriah Cotting, and probably had intended to build the houses there himself. The land was part of one of several parcels originally purchased from the Boston Water Power Company on January 29, 1866 by a real estate investment trust formed by John Templeman Coolidge, Franklin Evans, and Charles Henry Parker.

Click here for an index to the deeds for 317 Marlborough, and click here for further information about the land between the north side of Marlborough and Alley 416, from Fairfield to Gloucester.

The land originally was composed of two lots, each with a 24 foot frontage. Daniel Beckler subdivided them into a 22 foot lot on the east and a 26 foot lot on the west, and built 317-319 Marlborough on them.

In October of 1874, Daniel Beckler acquired land to the east of 317 Marlborough from attorney Harvey Jewell, probably with the intention of immediately building additional houses on it. He had overextended himself, however, and in late 1874 or early 1875, he declared bankruptcy and Harvey Jewell took back the land. Subsequently, Harvey Jewell apparently entered into an agreement with Daniel Beckler to construct the four houses at 309-315 Marlborough in 1877-1878 and also to build five more houses in 1878 at 302-310 Marlborough, across the street, on other land which he owned.

On March 29, 1875, Alpheus M. Stetson foreclosed on a mortgage given by Julia Beckler and transferred 317-319 Marlborough to his son, John A. Stetson.  Alpheus Stetson was a lumber and coal dealer; he and his wife, Sophia B. (Osborn) Stetson, lived in South Boston.

On April 24, 1875, 317-319 Marlborough were offered for sale at public auction.  On April 26, 1875, the Boston Post reported that the successful bidders were Alpheus M. Stetson for 319 Marlborough and H. M. Brown for 317 Marlborough.  H. M. Brown probably was acting for the Stetson family and transferred his right to purchase the property to Alpheus Stetson.

By 1879, it was the home of Eliza (Fay) Dodd, widow of William Goodell Dodd. Living with her, as a lodger, was Gardiner Swift Lamson, who had graduated from Harvard in 1877, He continued to live with her in 1880, but moved thereafter to 204 Dartmouth.

Eliza Dodd continued to live at 317 Marlborough during the 1882-1883 winter season , but moved thereafter.

On May 3, 1883, 317 Marlborough was purchased from Alpheus Stetson by Margaret Forrester (Boak) Williams, the wife of tea merchant William Brown Williams. They previously had lived at 234 West Canton. They also maintained a home in Magnolia.

On June 4, 1894, 317 Marlborough was purchased from Margaret Williams’s estate by Miss Julia M. Dolan. She lived with her mother, Catherine (Fallon) Dolan, widow of Charles Dolan, and her unmarried sisters, Catherine and Henrietta, at 36 Newbury and then at 292 Marlborough. She leased 317 Marlborough to others.

By the 1894-1895 winter season, it was the home of Dr. Walter Lincoln Burrage, a gynecologist, and his wife Sally (Swan) Burrage.  They had been married in October of 1894, and 317 Marlborough was their first home together.  Prior to their marriage, Dr. Burrage was a lodger at 140 Marlborough.

Dr. John Lovett Morse, a physician, lived at 317 Marlborough, as a lodger with the Burrages.  He also previously had been a lodger at 140 Marlborough.  He continued to live at 317 Marlborough during the 1899-1900 winter season, after which he moved to 70 Bay State Road.

The Burrages continued to live at 317 Marlborough during the 1902-1903 season, but moved thereafter to 282 Newbury.

By the 1904-1905 winter season, Julia Dolan, her mother, Catherine (Fallon) Dolan, and her sisters, Henrietta and Catherine, had moved from 292 Marlborough to 317 Dartmouth. They were joined by her brother, William A. Dolan, a railroad agent, who previously had lived in Dorchester.

The Dolans also accepted lodgers and rented space for medical offices (as she had at 292 Marlborough).

In 1905, Dr. John Mason Little, Jr. (who had been a lodger at 292 Marlborough in 1904), Dr. John Bromham Hawes, II, and Dr. Harry Caldwell Parker all lived and maintained offices at 317 Marlborough. Harry Parker married in August of 1905 to Clara Margaret Parker and moved to West Newton and then to Indianapolis. John B. Hawes moved by 1906 to the Hotel Royal at 295-297 Beacon.

John Mason Little, Jr., continued to live and maintain his office at 317 Marlborough until about 1907, when he joined Dr, William Grenfell’s medical mission in Newfoundland and Labrador.  He oversaw the organization’s hospital in St. Anthony, Newfoundland, and married there in September of 1911 to Ruth Esther Keese, a nurse.  They returned to Boston in 1917 and subsequently lived in Brookline.

By 1910, Dr. Channing Chamberlain Simmons, a physician, also maintained his office at 317 Marlborough.  He and his wife, Eleanor Bacon (Emmons) Simmons, lived at 245 Commonwealth with her widowed father, Nathaniel Henry Emmons, Jr.  Dr. Simmons continued to maintain his office at 317 Marlborough until about 1923, but had moved to 205 Beacon by 1924.

From about 1909, the Dolans’ only lodger appears to have been Ernest Lewis Gay, an antiquarian and book collector.  He previously had lived at 385 Beacon with his mother, Elizabeth Greenough (Lewis) Gay, the widow of Dr. George Henry Gay.  She died in December of 1907, and he moved from 385 Beacon soon thereafter.  385 Beacon became the home of his brother and sister-in-law, Dr. Warren Fisher Gay and Ellen Freeman (Stickney) Gay.  Ernest Gay continued to live at 317 Marlborough until his brother Warren’s death in August of 1916, when he moved back to 385 Beacon.

Catherine (Fallon) Dolan died in June of 1915.  Julia, Henrietta, and Catherine Dolan, continued to live at 317 Marlborough in 1923.

On June 30, 1923, 317 Marlborough was purchased from Julia Dolan by Shirley Clifford Speed.  S. Clifford Speed was a real estate dealer who converted many Back Bay houses into lodging houses and apartments. He and his mother, Flora E. (Clifford) Speed, widow of David George Speed, made 317 Marlborough their home during the 1923-1924 winter season. They previously had lived at 263 Newbury. By 1926, they had moved to 40 Fenway.

On November 5, 1923, the Boston Globe reported that, because of its increased enrollment, Emerson College had “found it necessary to add to its four dormitories a new one located at 317 Marlboro st.”  It is unclear whether the property was actually used for this purpose.

Living with Flora Speed and S. Clifford Speed were Harry Augustus Fellows, a salesman, and his wife, Lelia C. (Gale) Fellows.  They previously had lived in Woburn.  They continued to live at 317 Marlborough during the 1924-1925 winter season, but moved thereafter to 122 St. Stephen.

On April 20, 1925, 317 Marlborough was purchased from S. Clifford Speed by Fannie Jane (Watson) Tilley, the widow of Everett Grant Tilley, and Elizabeth Eleanor (Strachan) Bigelow, the wife of Ezra Hastings Bigelow. They both lived in Northborough.

By the 1925-1926 winter season, 317 Marlborough was the home of John Knight and his wife, Florence E. (Doane) Knight, who operated it as a lodging house.  They previously had lived at 116 Huntington.  He was a teacher at Charlestown High School.  In September of 1926, Fannie Tilley and Elizabeth Bigelow were cited by the Building Department for allowing the house to be operated as a lodging house without receiving proper permission.  Soon thereafter the house suffered fire damage and the Knights moved to 386 Marlborough.

In December of 1926, Fannie Tilley applied for (and subsequently received) permission to repair the fire damage.  She also requested to change the occupancy from a single-family dwelling to a lodging house.  The change in occupancy was not granted because of insufficient egress (the inspector noting that “when fire repairs were made on this house it was used for one family”).

By 1927 it was the residence (and possibly the medical office) of Dr. Bertha Lulu (Cameron) Guild, a homeopathic physician, the former wife of Chester Guild.  In 1926, she had lived and maintained her offices at 78 Huntington.

Dr. Guild may have applied for a lodging house license for 317 Marlborough, inasmuch as , on January 16, 1928, representatives of Fannie Tilley and Elizabeth Bigelow advised the Building Department that such an application was contrary to the terms of the lease with Dr. Guild, that she had been asked to vacate the premises for non-payment of rent, and that if “she refuses to vacate will be ejected.”  By mid-1928, Dr. Guild had moved to 271 Beacon.

In 1931, 317 Marlborough was the home of Irving (Ervin) Lincoln Beaman and his wife, Ida Pearl (Westerman) Rowe Beaman, who operated it as a lodging house. They previously had lived at 146 West Canton. By 1932, they had moved to 384 Marlborough.

In December of 1931, Fannie Tilley and Elizabeth Bigelow were cited once again by the Building Department for failing to provide adequate egress.

317 Marlborough continued to be a lodging house in the early 1930s, with various operators.

On April 6, 1933, the Massachusetts Hospital Life Insurance Company foreclosed on its mortgage to Fannie Tilley and Elizabeth Bigelow, and took possession of 317 Marlborough. It was shown as vacant in the 1933-1940 City Directories.

On May 11, 1940, 317 Marlborough was acquired from the Massachusetts Hospital Life Insurance Company by Herman L. Slack.

By 1941, it was the home of Bror August Lindstrom, a mechanic, and his wife, Alida Kristina (Akerblom) Lindstrom, who continued to operate it as a lodging house.  They previously had lived at 41 Worcester Square.

On January 18, 1946, 317 Marlborough was acquired from Herman Slack by Alexander Macomber, a consulting engineer, and his wife, Alfrieda (Frieda) (Terry) Macomber. They previously had lived in New Hampshire.

In November of 1946, he applied for (and subsequently received) permission to convert the property from a lodging house into a single-family dwelling.  They continued to live there until 1955, when they moved to an apartment at 401 Beacon, where they were living at the time of his death in March of 1956.

On July 26, 1955, 317 Marlborough was acquired from the Macombers by John L. McCrea and his wife, Estelle M. McCrea. They previously had lived in an apartment at 64 Commonwealth.  He was a Vice President of the John Hancock Mutual Life Insurance Company.

On April 23, 1957, 317 Marlborough was acquired from the McCreas by William J. Blake and his wife, Alice Margaret (Dufault) Blake. They previously had lived at 37 Beacon. He was manager of the New England office of the Veterans Administration and had served in the Massachusetts National Guard from 1916 to 1946, retiring with the rank of Brigadier General.

The Blakes converted 317 Marlborough into apartments and lived in one of the units.

On May 29, 1964, the Blakes transferred the property to themselves and William Albright Shue as trustees of the General William J. Blake Trust. William Shue was William Blake’s nephew, the son of Harden A. Shue and Anna Marie (Blake) Shue; he was an attorney and former army officer.

In January of 1968, the Blakes filed for (and subsequently received) permission to convert the property into four apartments, which they indicated had been the use “for many years.”

From about 1967 to about 1969, the Integral Yoga Institute also was located at 317 Marlborough.

On July 22, 1978, William A. Shue, surviving trustee of the General William J. Blake Trust, transferred 317 Marlborough to himself, and on the same day he sold the property to William G. Peck. On August 26, 1988, Edward T. Anderson acquired the property from William Peck.

The property subsequently changed hands. It continued to be assessed as a single-family dwelling in 2021.