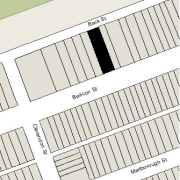 160 Beacon was designed by architects Peabody and Stearns and built in 1902 by McNeil Brothers for banker and broker John Parkinson. It replaced two houses, at 156 and 158 Beacon, which he purchased in November of 1901 and had razed.

Click here for an index to the deeds for 160 Beacon, and click here for further information on the land on the north side of Beacon, including the Storrow Memorial Embankment on the Esplanade.

Plans for the house are included in the Peabody and Stearns Collection in the Boston Public Library’s Arts Department (reference PS/MA.119). The plans include front and rear elevations, a lateral section, floor and roof plans, framing plans, and drawings of interior details.

160 Beacon, front and rear elevations, excerpts from drawings by Peabody and Stearns (1902); courtesy of the Boston Public Library Arts Department

Click here to view the original plans for 160 Beacon.

By the 1902-1903 winter season, John Parkinson and his wife, Gertrude (Weld) Parkinson, had made 160 Beacon their home. They previously had lived at 238 Marlborough. They also maintained a home in Bourne.

John Parkinson, Sr., died in October of 1918.  After his death, John and Mary Ann Parkinson continued to live at 160 Beacon during the 1920-1921 winter season, after which they made Dover their year-round home.

By the 1921-1922 winter season, Mabel Walker had made 160 Beacon her home. In November of 1921, she sold her home, Fairview, in Weston to the Society of Jesuits and, thereafter, summered in Lenox.

She continued to live at 160 Beacon and in Lenox until her death in May of 1943.

Willis Munro was an attorney by training. He had given up law practice to become a forester, but later resumed practice as a trustee. He lived in Mattapoisett until about 1950, when he moved to 146 Beacon, which he had acquired in 1942.

By 1946, 160 Beacon had been leased by Boston University.  In August of 1946, it applied for (and subsequently received) permission to convert the property from a residence to a nursing school and dormitory.  The school remained there until about 1949.

From about 1950, to about 1952, 160 Beacon was the location of Fisher School for Men (formerly Fisher Business School and later to be Fisher College).

In October of 1954, Willis Munro filed for permission to convert the property from a nursing school and dormitory to an educational institution operated for profit so that it could be occupied by Burdett College, a business college previously located at 156 Stuart Street. The Board of Appeal approved the change on November 19, 1954, noting that 160 Beacon had been “vacant for some time.”

On December 17, 1954, 160 Beacon was acquired from Willis Munro by Burdett College. It continued to be located there until the early 1970s. In June of 1972, it merged with the Bradford School Corporation.

On September 11, 1972, 160 Beacon was acquired from the Bradford School Corporation by Nick S. Ferren.  In June of 1973, he applied for (and subsequently received) permission to convert the property into eight apartments.

Charles Kirby purchased the land for 156-158 Beacon on January 18, 1860, from the Boston and Roxbury Mill Corporation.

Click here for an index to the deeds for 156 Beacon (Demolished), and click here for further information on the land on the north side of Beacon, including the Storrow Memorial Embankment on the Esplanade.

On July 20, 1861, 156 Beacon was purchased from Charles Kirby by Caroline Maria (Welch) Crowninshield, the widow of Edward Augustus Crowninshield. She previously had lived at 103 Pinckney. At about the same time, 158 Beacon became the home of Edward Crowninshield’s brother-in-law and sister, Rev. William Mountford and Elizabeth (Crowninshield) Mountford.

Edward A. Crowninshield, Jr., had graduated from Harvard in 1861 and become a commission merchant. He died in July of 1867.

Francis W. Crowninshield had entered Harvard in July of 1860 with the Class of 1864, but withdrew in 1861 and enlisted with the Massachusetts Second Volunteers and served as an officer at a number of major battles. He was wounded several times. After the war, he resumed living at 154 Beacon.  He died while traveling in Italy in May of 1866 from what his Harvard Memorial Biography called “the fatigues and excitement of his army life.”

Frederic Crowninshield graduated from Harvard in 1866 and married in October of 1867 to Helen Suzette Fairbanks. An artist, he subsequently studied in Europe, returning to Boston to become a teacher of drawing and painting at the Museum of Fine Arts in Boston from 1879 to 1885.

In the late 1860s, Caroline Crowninshield was living elsewhere.

In 1868, 156 Beacon was the home of wholesale dry goods merchant John Hogg and his wife, Emma E. (Whiting) Hogg. They previously had lived at the Parker House hotel. By 1869, they had moved to 50 Commonwealth.

In 1869, 156 Beacon was the home of John Revere and his wife, Susan Tilden (Torrey) Revere. They previously had lived at 93 Beacon. John Revere was agent for, and later treasurer and then president of, his family’s firm, the Revere Copper Company. By 1870, they had moved to 40 Commonwealth.

In December of 1869, Caroline Crowninshield married again, to attorney Howard Payson Arnold.  The Arnolds lived at 156 Beacon after their marriage, occasionally making it available to others while they were traveling or living elsewhere.

In 1875, it was the home of banker Richard Tucker Parker and his wife, Martha Sylvester (Thorndike) Parker. By 1876, they had moved to 85 Beacon.

In 1876, 156 Beacon was the home of shipping merchant and woolen textile manufacturer Thomas Quincy Browne and his wife, Juliet Frances (Wheildon) Browne. They previously had lived in Concord.

In 1882, the Arnolds were joined at 156 Beacon by Caroline Arnold’s son and daughter-in-law, Frederic Crowninshield and Helen (Fairbanks) Crowninshield. They had lived at 108 Marlborough during the 1880-1881 winter season, and moved to 95 Mt. Vernon by 1883.

During the 1884-1885 season, the Arnolds were living elsewhere and 154 Beacon was the home of attorney and mining investor Horatio Ripley Bigelow and his wife Anne Lenthal (Smith) Bigelow. Their unmarried daughters, Adeline A. Bigelow and Anna S. Bigelow, lived with them.  They previously had lived at the Hotel Vendome and before that at 254 Beacon.  They also maintained a home in Hanover.

Anna Bigelow married in October of 1884 to Thomas Nelson of East Marshfield.  He was a real estate broker and later would become treasurer of several mining companies. After their marriage, they lived at 18 Fairfield.

By the 1885-1886 winter season, Horatio and Anne Bigelow, and their daughter Adeline, had moved to 9 Fairfield and 156 Beacon was the Arnolds’ home once again.

Caroline Arnold died in October of 1897.  Howard Arnold continued to live at 156 Beacon until about 1901, but moved to Pasadena, California, soon thereafter.

On November 4, 1901, 156 Beacon was purchased from Caroline Arnold’s estate by John Parkinson and was razed soon thereafter.

Charles Kirby purchased the land for 156-158 Beacon on January 18, 1860, from the Boston and Roxbury Mill Corporation.

Click here for an index to the deeds for 158 Beacon (Demolished), and click here for further information on the land on the north side of Beacon, including the Storrow Memorial Embankment on the Esplanade.

On May 18, 1861, 158 Beacon was purchased from Charles Kirby by George H. Rogers, trustee for Elizabeth Boardman (Crowninshield) Mountford, the wife of Rev. William Mountford. They previously had lived at 72 Beacon. At about the same time, Elizabeth Montford’s sister-in-law, Caroline Maria (Welch) Crowninshield, the widow of Edward Augustus Crowninshield, purchased 156 Beacon.

The Mountfords continued to live at 158 Beacon in 1863, but moved thereafter to 101 Beacon.

On October 28, 1863, 158 Beacon was purchased from Elizabeth Mountford’s trust by wine merchant Edwin Augustus Boardman. He and his wife, Mary Ann (Dorr) Boardman, made it their home. They previously had lived at 57 Chestnut.

Edwin Boardman, Jr., married in June of 1875 to Harriet (Harriette) Smith DeBlois. After their marriage, they lived at 158 Beacon with his mother. They also maintained a home in Beverly.

Mary Boardman died in 1889. Edwin and Harriet Boardman continued to live at 158 Beacon until his death in June of 1899.

The house was not listed in the 1900 Blue Book.

During the 1900-1901 winter season, 158 Beacon was the home of Joseph Warren Merrill, Jr., and his wife, Marion (Marie) Louise (Raymond) Merrill. Joseph Merrill was a trustee of estates. They also maintained a home, Rockhurst, in Manchester, Massachusetts.

On November 4, 1901, 158 Beacon was purchased from Edwin Boardman’s heirs by John Parkinson and was razed soon thereafter.