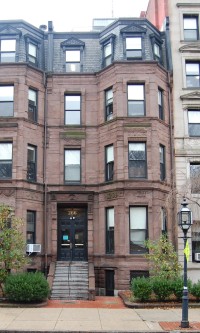 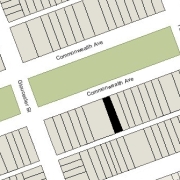 John Shapleigh is shown as the owner on the original building permit application for 266 Commonwealth, dated September 15, 1883. He purchased the land for the house on September 1, 1883, from Henry Stackpole. It had changed hands several times and was part of a parcel previously owned by Nathan Matthews, part of an even larger tract he had purchased on January 2, 1871, from David Sears, Jr., Frederick R. Sears, and Knyvet Sears.

Click here for an index to the deeds for 266 Commonwealth, and click here for further information about the land between the south side of Commonwealth and Alley 432, from Fairfield to Gloucester.

On January 20, 1885, 266 Commonwealth was purchased from John Shapleigh by Lizzie Mary Whipple and her brother, John Reed Whipple. They and their parents, Joseph Reed Whipple and Rose (Higgins) Whipple, made it their home. They previously had lived at the St. Cloud Hotel at 567 Tremont.

Joseph Reed Whipple was a hotel owner and operator.  In 1876, he and George G. Hall acquired Young’s Hotel on Court Square, and from 1883 they were also operators of the Adams House.  In 1887, they dissolved their partnership, with J. Reed Whipple taking ownership of Young’s Hotel and George Hall becoming sole proprietor of the Adams House.  In 1890, J. Reed Whipple purchased the Parker House, and in 1896-1897 he built the Hotel Touraine at the southeast corner of Tremont and Boylston.

J. Reed Whipple also owned the 2,500 acre Valley View farm in New Boston, New Hampshire, where he had been born. According to the New Boston Historical Society, he shipped produce and dairy products from the farm to Boston for use in his hotels’ kitchens, and shipped barrels of left-over food from the hotels to New Boston to be fed to his pigs and chickens.

Lizzie May Whipple married in June of 1896 to Edgar Pierce and they moved to Cambridge. He was a teacher at the time of their marriage but subsequently became a manager at the Parker House hotel.

John Reed Whipple died in January of 1899. At the time of his death, he was associate manager of the Hotel Touraine.

J. Reed and Rose Whipple continued to live at 266 Commonwealth during the 1905-1906 winter season, but moved thereafter to the Parker House.

On March 7, 1907, 266 Commonwealth was purchased from Joseph Reed Whipple and Lizzie May (Whipple) Pierce by the Boston Academy of the Sacred Heart. It acquired 264 Commonwealth on the same day. The Academy subsequently moved its school and convent from Chester Square to 264-266 Commonwealth.

On December 3, 1925, the Academy of the Sacred Heart sold 260-262-264-266 Commonwealth to Helen M. (Leland) Towle, the widow of real estate dealer Loren Delbert Towle, who had died in September of 1923. In exchange, the Academy acquired the recently completed Towle estate in Newton, where it moved, becoming the Newton Country Day School.

On March 14, 1927, 260-262-264-266 Commonwealth were purchased from Helen Towle by David Shikes and Philip Boris Long, real estate dealers, who converted the buildings into a lodging house.  In February of 1927, they filed for (and subsequently received) permission to make interior improvements.  The current and proposed use was stated as “lodging house and dormitories.”

By 1928, the lodging house at 260-262-264-266 Commonwealth was operated by Miss Helen M. Catlin and Miss Edith Ray Clapp. They previously had lived at 122 Newbury. The four buildings were operated as one property, with the address of 262 Commonwealth. 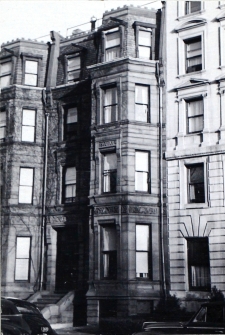 David Shikes died in August of 1937. His estate and Philip B. Long continued to own the buildings until 1942.

On June 2, 1942, Helen Towle foreclosed on the mortgage given by David Shikes and Philip Long when they purchased the property and took possession of 260-262-264-266 Commonwealth.

Helen Catlin and Edith Ray Clapp continued to operate the lodging house at 260-262-264-266 Commonwealth until about 1946, and probably until Helen Catlin’s death in February of 1947. Edith Ray Clapp moved thereafter to an apartment at 31 Fairfield.

On December 20, 1946, the buildings were acquired from Helen Towle by Morton J. Archer. They continued to be operated as lodging houses.

In May of 1947, Morton Archer applied for (and subsequently received) permission to cut openings in the party wall with 260 Commonwealth to provide additional egress.  In June of 1949, he applied for permission to install a fire balcony connecting with 258 Commonwealth.  In that filing, the name “Goldberg” was crossed-off and replaced by Morton Archer’s name, as treasurer of M & N Hotels, Inc. (at 57 Bernard in Dorchester, Jacob Goldberg’s address).

On July 29, 1949, 260-262-264-266 Commonwealth were acquired from Morton Archer by Miss Josephine Mary Ward. She lived there and continued to operate the four buildings as a lodging house with the address of 262 Commonwealth. She previously had lived in Saugus with her parents, Philip Walter Ward and Ellen M. (Brennan) Ward.

Also living at 262 Commonwealth was Miss Helen Bridget Walsh, a former nurse, who may have assisted Josephine Ward in managing the lodging house.

In March of 1954, she applied for permission to allow automobiles to park for a fee behind 260-262-264-266 Commonwealth.  It appears the application was denied.

Josephine Ward’s father died in 1954 and in about 1958 her mother, Ellen (Brennan) Ward, joined her at 262 Commonwealth. She previously had lived in an apartment at 470 Beacon and, before that, in Saugus. 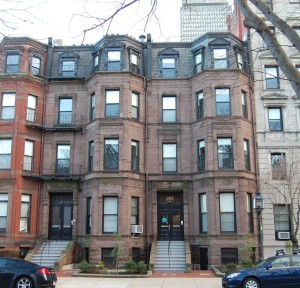 Josephine Ward and her mother continued to live at 262 Commonwealth until about 1960, when they moved to 29 Hereford.  Helen Walsh moved with them.

In October of 1960, it applied for (and subsequently received) permission to convert 266 Commonwealth from a lodging house into a dormitory.

In May of 1962, Chamberlayne purchased the former Professional Building at 270 Commonwealth and converted it into a dormitory. It purchased 274–276 Commonwealth at the same time, and in June of 1966 it acquired 278–280–282 Commonwealth.

Chamberlayne went bankrupt in the mid-1970s and sold many of its properties.

264-266-270 Commonwealth remained the property of the Stratford Foundation, successor to Chamberlayne School and Chamberlayne Junior College, and continued to be dormitories in the 1980s.

On November 6, 1989, 264-266-270 Commonwealth were purchased from the Stratford Foundation by Berklee College of Music. 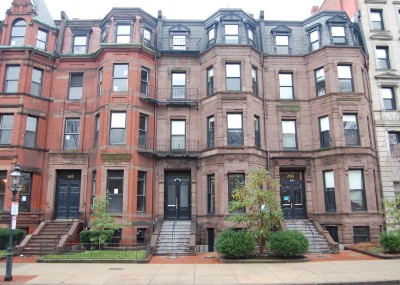