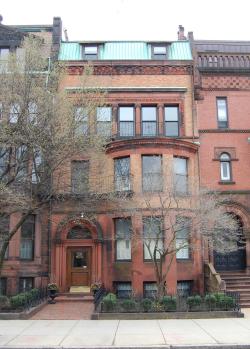 280 Commonwealth was designed by Walker and Kimball, architects, and built in 1894-1895 by F. F. Morton, builder, as the home of wholesale dry goods merchant John Hogg, and his wife, Emma E. (Whiting) Hogg. They previously had lived at 74 Commonwealth. They also maintained a home, Inglisby, in Framingham.

John Hogg is shown as the owner of 280 Commonwealth on the original building permit application dated February 24, 1894, and on the final building inspection report dated March 29, 1895.

John Hogg purchased the land for 280 Commonwealth on December 13, 1893, from Augustus F. Arnold, a real estate conveyancer, who had acquired it that same day from Alexander Moseley. Alexander Moseley and his wife, Frances A. (Richardson) Moseley, lived at 282 Commonwealth, and in the deed he included provisions specifying that only a single-family dwelling could be built at 280 Commonwealth and limiting the height and depth of any such house.

Prior to selling the land to John Hogg, Alexander Moseley had planned to build a house on the lot  himself and, as he advertised in October of 1892 in the Boston Evening Transcript, to lease it “to a desirable party at very reasonable price on a long lease.”

Alexander Moseley had acquired the lot on May 14, 1890, from Eustace Carey Fitz. It had changed hands several times and was part of a parcel previously owned by Nathan Matthews, part of an even larger tract he had purchased on January 2, 1871, from David Sears, Jr., Frederick R. Sears, and Knyvet Sears.

Click here for an index to the deeds for 280 Commonwealth, and click here for further information about the land between the south side of Commonwealth and Alley 432, from Fairfield to Gloucester.

Emma Hogg died in June of 1895 in Framingham, possibly before 280 Commonwealth was completed.  After her death, John Hogg lived at 280 Commonwealth, joined by Charles and Cora Searle, who moved there from 176 Newbury.

In November of 1895, John Hogg transferred Inglisby, his Framingham property, to Jesse Beebe and she and her husband made it their country home.

In 1898-1899, the Searles leased the newly-built home, The Monastery, on Little’s Point in Swampscott, designed and owned by architect Arthur Little, whose home, Blythswood (Blytheswood), was on the same property. It remained their summer home in 1906, but later that year they and John Hogg purchased land in Ipswich, where they built a new home, which (like the Beebes’ home in Framingham) they called Inglisby.

Charles Searle, Jr., died in December of 1913.  At the time of his death, he was manager of the Globe Thread Mill in Fall River.

Corinna Searle married in September of 1916 to Harold Damrell Walker, an architect in practice with his father, Charles Howard Walker (whose former firm, Walker and Kimball, designed 280 Commonwealth).  After their marriage, they lived at 18 Fairfield.

John Hogg and Charles Searle, Sr., both died in January of 1917.

Cora Searle and her sons, John and Richard Searle, continued to live at 280 Commonwealth.  In early 1918 she sold Inglisby in Ipswich to Isaac Rand Thomas of 303 Commonwealth, and in early 1919 she purchased a home in Manchester, Massachusetts, from Bessie Paine (Nazro) Bigelow, the widow of Prescott Bigelow, formerly of 16 Marlborough.

John Searle, a lawyer, married in June of 1923 to Jeanne Hortense Schroers.  After their marriage, he continued to practice in Boston but they lived in Cedarhurst on Long Island.

Richard Searle, who had been an aviator during World War I and then became a wool merchant and (by 1929) investment broker, married in March of 1926 to Miss Allan Joy Ayers.  After their marriage, they lived briefly at 35 Bay State Road and 316 Newbury, and by 1929 were living in an apartment at 31 Fairfield.  They also maintained a home in Marblehead.

Cora Searle continued to live at 280 Commonwealth until her death in April of 1937.

280 Commonwealth was shown as vacant in the 1938 City Directory.

On August 6, 1937, 280 Commonwealth was purchased from Cora Searle’s estate by Samuel Handler. In August of 1939, he applied for (and subsequently received) permission to install a boiler at 280 Commonwealth; in the application, he indicated that the property was a lodging house.

On March 15, 1940, 280 Commonwealth was purchased from Samuel Handler by William Karmazine, trustee of the Esdith Realty Trust. He acquired 278 Commonwealth on the same day.

Stanley Wilson and his wife, Gertrude N. (Goldberg) Wilson, made 280 Commonwealth their home. They previously had lived in Brookline. Based on the City Directories and Lists of Residents, it appears that they occupied it as a single-family dwelling.

On June 26, 1952, 280 Commonwealth was purchased from Stanley Wilson by Christopher (Chrest) A. Dounelis. He and his wife, Cora A. (Wright) Dounelis, lived in Barre, Vermont, where they operated a candy shop and luncheonette.

In August of 1956, he filed for (and subsequently received) permission to cut doors between 278 and 280 Commonwealth to provide additional egress.

278-280 Commonwealth continued to be occupied as a dormitory for the Cambridge School of Business.

In February of 1963, Mifro Realty Trust applied for (and subsequently received) permission to re-install kitchen equipment in the basement of 280 Commonwealth.  The application indicated that the kitchen had been moved to another location in August of 1961.   “Food will be prepared and served to students that dine in basement of 278 Commonwealth.  The necessary door in the party wall was installed five years ago.  The present occupant is Cambridge School of Business.”

In July of 1963, the Mifro Realty Trust and the Osborne Association of Boston, an association of Cambridge School of Business students, each filed for (and subsequently received) permission to convert the basement and first floor into a club for use by the students, with the remainder of the building continuing to be used as a dormitory.

The Osborne Association clubrooms and the Cambridge School of Business dormitory remained at 278-280 Commonwealth during the mid-1960s. 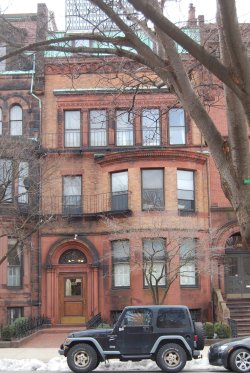 In October of 1976, prior to finalizing either purchase, Back Bay Restorations had filed for (and subsequently received) permission to combine 280 and 282 Commonwealth into one property, with the address of 280 Commonwealth, and convert the combined property into 18 apartments.

At the same time, it also applied to combine 274-276 Commonwealth and 278 Commonwealth into one property, with the address at 274 Commonwealth, and convert the combined property into 23 apartments. In February of 1984, it filed for (and subsequently received) permission to increase the number of apartments at 274-276-278 Commonwealth from 23 to 25.