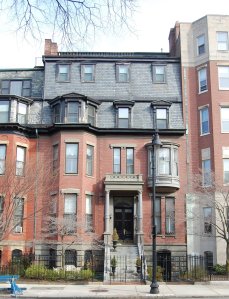 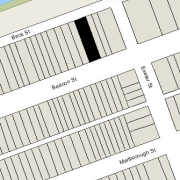 290 Beacon is located on the north side of Beacon, between Exeter and Fairfield, with 286-288 Beacon to the east and 292 Beacon to the west.

290 Beacon was built ca. 1869, three stories (two stories and mansarded third floor) and basement in height on a 38 foot wide lot. 286-288 Beacon were built at the same time, a symmetrical pair of houses five stories (four stories and a mansarded fifth floor) and basement in height on 20 foot wide lots. As originally built, 286-288 Beacon and 290 Beacon shared the same design for their entrance porticos, fenestration, and cornices. Howard Snelling and his wife, Anna Lothrop (Rodman) Snelling, built 290 Beacon as their home and 288 Beacon as an investment. Howard Snelling’s first cousin, once removed, George Middleton Barnard and his wife, Ellen Hooper (Russell) Barnard, built 286 Beacon.

Bainbridge Bunting’s Houses of Boston’s Back Bay does not attribute 286-288 Beacon and 290 Beacon to specific architects. However, a January 2, 1869, Boston Post article on current building projects in the city includes “a 2½ story dwelling 38×60 on Beacon street west of Berkeley street, by Faulkner and Clark [sic], costing about $20,000.” 290 Beacon is the only house on either side of Beacon in the Back Bay built on a 38 foot lot and, therefore, appears to be the house referenced in the Post article. The article also mentions “two four-story dwellings, 20×60, erected by Messrs. Faulkner & Clarke, at a cost of about $56,000.” Given the dimensions of 286-288 Beacon, the similarities in design, and the common ownership of 288 and 290 Beacon, it appears likely that 286-288 Beacon were the houses referenced by the Post and, therefore, that all three were designed by Faulkner and Clarke.

Click here for an index to the deeds for 290 Beacon, and click here for further information on the land on the north side of Beacon, including the Storrow Memorial Embankment on the Esplanade.

By late 1869, Howard and Anna (Rodman) Snelling had made 290 Beacon their home. They previously had lived at 9 Allston on Beacon Hill. He was a coal dealer. They continued to live at 290 Beacon in 1870, but moved thereafter to Lincoln.

On July 23, 1870, 290 Beacon was purchased from Anna Snelling by Caroline Augusta (Battelle) Chickering, the wife piano manufacturer Thomas Edward Chickering. They previously had lived at 210 Beacon.

Thomas Chickering died in February of 1871. Caroline Chickering continued to live at 290 Beacon with their daughter, Lillian, who married in February of 1882 to Gordon Prince, a real estate trustee. After their marriage, Gordon and Lillian Prince lived at 290 Beacon with her mother. They also maintained a home, Foregate, in West Manchester, Massachusetts.

Caroline Chickering died in April of 1900.  Gordon and Lillian Prince continued to live at 290 Beacon for the rest of their lives.  He died in June of 1902 and she died in October of 1917.  Their sole surviving son, Gordon Chickering Prince, continued to live there until shortly before his marriage to Anna Agassiz in May of 1924.  After their marriage, they lived at 344 Marlborough.

On May 23, 1924, 290 Beacon was purchased from Gordon C. Prince by Alice (Willard) Dorr, the wife of Arthur Everett Dorr. They previously had lived in Dorchester. He was a retail grocer (provisions merchant). They also maintained a home at North Scituate.

In June of 1924, Arthur Dorr filed for (and subsequently received) permission to remodel 290 Beacon and convert it from a single-family home into a three-family home, including adding additional bay windows at the rear.  It appears that it was at this time that a separate front entrance was added, numbered 290-A Beacon, for the unit on the lower level of the house.  The remodeling was designed by architect Edward B. Stratton.

In November of 1924, Arthur Dorr filed for (and subsequently received) permission to build a heater building at the rear of the property.  This may have become the garage or an existing shed may have been converted for that purpose (a wooden structure occupying most of the rear of the building is shown on the 1874 Hopkins maps, and on all of the subsequently Bromley maps).  The garage apparently incorporated living space, inasmuch as, in 1958, the executor of Alice Dorr’s estate filed an affidavit indicating that “the garage apartment or apartments located at the rear of said property were continually used or occupied from time to time since 1924 by one or more employees of the said Alice W. Dorr and her late husband, Arthur E. Dorr.”

Arthur and Alice Dorr continued to live at 290 Beacon for the rest of their lives.  He died in December of 1956 and she died in March of 1958.

After the remodeling in the mid-1920s, 290-A Beacon became the home of Jerome Carruth Smith and his wife, Anna (Morton) Smith.  They had married in January of 1925 and 290-A Beacon probably was their first home together.  He previously had lived at 270 Newbury.  Herbert Farnsworth, his son by his first marriage, to Ethel G. Simonds (who died in December of 1922), lived with them (Herbert Farnsworth was born Herbert Simonds Smith but took the surname Farnsworth; Jerome Smith’s mother was Harriet Elizabeth Farnsworth).

A former lawyer and stockbroker, Jerome Smith was treasurer of a cold storage company.

They continued to live at 290-A Beacon during the 1929-1930 winter season, but moved soon thereafter to an apartment at 274 Beacon.

On September 24, 1958, 290 Beacon was purchased from Alice Dorr’s estate by Dr. Howard Cartnick Reith and his wife, Frances Ellen (born Frances Eleanor Lillian) (Gardner) Reith.  They lived in Winthrop and he maintained his office at 370 Commonwealth.

Both the basement remodeling and the fourth floor addition were designed by architect Saul Moffie. Plans for both are included in the City of Boston Blueprints Collection in the Boston City Archives (reference BIN R-204 and R-205).

After the remodeling was completed, the Reiths moved to an apartment at 290 Beacon.

On October 30, 1970, 290 Beacon was acquired from the Reith Realty Corporation (of which Howard Reith remained the president) by real estate dealer George P. Demeter, trustee of the Demeter Realty Trust.

In March of 1981, two abutters filed a petition with the Board of Appeal arguing that the penthouse extension had been built before the permit had been issued and violated the zoning code.  Ultimately, the extension was allowed to remain.

In September of 1994, George Demeter filed for (and subsequently received) permission to “legalize penthouse unit per court order” and to combine the penthouse and fifth floor units, reducing the number of units from six to five.

On October 16, 2003, 290 Beacon LLC converted the property into five condominium units (including one located in the former garage), the 290 Beacon Condominium.