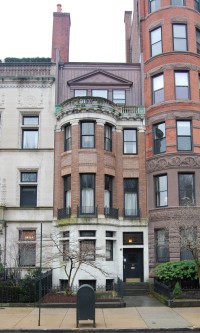 The land for 306 Commonwealth was owned by Mary Alba (Webster) Dwight’s family: one-half interest held by her uncle, David Locke Webster, a leather and morocco dealer, and one half interest held by a trust for the benefit of her mother, Mary (Moulton) Webster, the widow of John Gerrish Webster, and their children: Ella Elisabeth (Webster) Hill, the wife of Chicago attorney James M. Hill; Mary Alba (Webster) Dwight; Clara Eunice Webster; and Frances Maria (Webster) Eldredge, the wife of San Francisco banker Zoeth Skinner Eldredge.

The lot was the western 19.62 feet of a 54.62 foot lot the Webster family had purchased on December 9, 1891, from David Greer. The Webster family also owned the Hotel Imperial at 308 Commonwealth and, according to a January 7, 1892, Boston Evening Transcript report, had purchased the lot from David Greer in order to build a seven story addition to the Imperial. Instead, they left the lot vacant for several years and then sold the eastern 35 feet, where 304 Commonwealth would be built, in May of 1895, and used the remainder for the Dwights’ house.  The 54.62 foot lot had been part of a tract of land originally purchased by Nathan Matthews on January 2, 1871, from David Sears, Jr., Frederick R. Sears, and Knyvet Sears.

Click here for an index to the deeds for 306 Commonwealth, and click here for further information about the land between the south side of Commonwealth and Alley 431, from Gloucester to Hereford.

By the 1896-1897 winter season, Henry and Mary Alba (Webster) Dwight had made 306 Commonwealth their home. They previously had lived at 5 Brimmer.

On January 25, 1897, soon after 306 Commonwealth was completed, David Webster transferred his one-half interest in the property to the trust established for the benefit of Mary (Moulton) Webster and her children, and on July 6, 1897, the trust transferred the property to Mary Alba (Webster) Dwight.

The Dwights continued to live at 306 Commonwealth until January of 1904, when they moved to California because of his ill health.

On August 10, 1904, George R. Weed, an attorney, foreclosed on a mortgage from Mary Alba Dwight and took possession of the property.

During the 1904-1905 winter season, 306 Commonwealth was the home of Col. Albert Augustus Pope and his wife, Abbie (Linder) Pope.  They also maintained a home in Cohasset.  Their usual Boston residence was at 378 Commonwealth, where they had lived until the 1901-1902 season, and where the resumed living by the 1906-1907 season.

Col. Pope was a pioneer bicycle manufacturer, maker of the Columbia bicycle.  His Pope Manufacturing Company was located at 221 Columbus.  From 1897 to 1899, his company also produced electric vehicles, and from 1903 it manufacturer gasoline-powered automobiles (the Pope-Hartford, Pope-Toledo, and others). 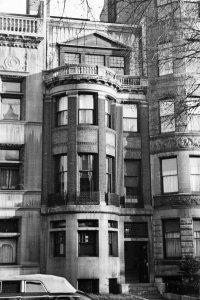 On June 1, 1905, 306 Commonwealth was acquired from George Weed by David Crowell Percival, III. He and his wife, Harriette E. (Williamson) Percival, made it their home. They previously had lived at 636 Beacon. They also maintained a home on Marblehead Neck.

On January 31, 1925, he transferred the property into his and his wife’s names.

The Percivals continued to live at 306 Commonwealth until about 1943, but had moved to The Puritan at 390 Commonwealth by 1944.

On January 22, 1945, 306 Commonwealth was purchased from the Percivals by Julia (Giulia) (Leverone) Arata, the widow of Paul (Paolo) Arata, and her son, Fred L. Arata, a retail liquor dealer and real estate investor. Fred Arata and his wife, Annette Flossie (Crovo) Boggiano Arata, lived in Brighton; his mother lived with them.

In February of 1945, he applied for (and subsequently received) permission to convert the property from a single-family dwelling into five apartments.

Julia Arata died in April of 1952 and on August 31, 1955, 306 Commonwealth was purchased from Fred Arata by Frederick Elmer Farnum, an optometrist, and his wife, Julia Frances (Smith) Farnum, a manufacturer’s representative. They lived at 328 Commonwealth, where they operated a lodging house.