The block on the south side of Commonwealth between Gloucester and Hereford is 375 feet in length and 124 feet 6 inches from Commonwealth to Alley 431.

The land was part of the area owned by the David Sears family. Their lands extended south from a line down the middle of Commonwealth, bounded on the east by the Commonwealth’s lands (the boundary was 262 feet west of Exeter, at about where the western wall of 214 Commonwealth is today) and on the west by the Boston Water Power Company’s lands, by a line that ran southwest at approximately a 45 degree angle from a point on the south side of Commonwealth 134.66 feet west of Hereford (324 Commonwealth straddles the line). The Sears family land extended south by an irregular line past Boylston to about St. James Street.

The Sears family sold all of its land on January 2, 1871, to Nathan Matthews. He was a real estate investor and developer, and served as president of the Boston Water Power Company from 1860 to 1870. He and his wife, Albertine (Bunker) Matthews, lived at 12 Arlington.

On October 16, 1873, Nathan Matthews conveyed the land to a trust he had formed with Henry D. Hyde and Grenville T. W. Braman.

Henry Dwight Hyde was an attorney. He and his wife, Luvan Augusta (Charles) Hyde, lived at 153 West Newton and later at 380 Commonwealth. Grenville Temple Winthrop Braman was a real estate investor and served as treasurer of the Boston Water Power Company until mid-1869 (at the same time as Nathan Matthews was president). He and his wife, Susie A. (Davies) Braman, lived at 9 Brimmer and later at 447 Beacon.

On November 19, 1875, the trustees terminated the trust and the land was distributed to individual owners.

The parcel between Gloucester and the former boundary with the Boston Water Power Company lands was conveyed to Nathan Matthews. It encompassed the land between the south side of Commonwealth and the north side of Newbury, and included the land where Hereford Street and the alleys later would be laid out. The parcel had a frontage of 569.61 feet on the south side Commonwealth and 724.68 feet on the north side of Newbury.

On June 2, 1876, Nathan Matthews subdivided the parcel. He sold the lot at the corner of Gloucester, with a frontage on Commonwealth and Newbury of 74 feet 9 inches, to the Boylston National Bank, the lot west of it, with a frontage of 38 feet 7½ inches, to Edwin Pope, and the 261 foot 7½ inch remainder of the block between Gloucester and Hereford to Caleb Warner and Charles Smith (their parcel continued further west and included the 60 foot wide parcel on which Hereford Street later would be located and the eastern 90.25 feet of the block between Hereford and Massachusetts Avenue). Nathan Matthews retained the land furthest west, between the land he sold to Caleb Warner and Charles Smith and the former boundary with the Boston Water Power Company lands.

Click here for more information on the Sears family land in the Back Bay.

Eastern Parcels. On May 20, 1880, the Boylston National Bank sold the corner lot at Commonwealth and Gloucester, with a frontage of 27 feet, to Sumner Mead, who built his home at 284 Commonwealth.

The bank retained the rest of the land and entered into an agreement with building contractor William Seavey Rand under which he built houses at 286-288 Commonwealth and 30-32-34-36 Gloucester. When each house on Commonwealth was completed and a buyer was identified, the bank sold the land to William Rand who then sold the house and land to the purchaser. In the case of the houses on Gloucester, then bank sold the land and houses directly to the individual purchasers.

Edwin Pope, who had acquired the 38 foot 7½ inch lot to the west of the bank’s land, sold the lot on July 8, 1878, to the estate of his brother, William Henry Pope. The estate sold the lot on September 1, 1890, to wholesale coal merchant George F. Wayland of Brookline. He sold it on September 4, 1890, to architect and building contractor Frederick Pope, who built an apartment house at 290 Commonwealth.

Western and Central Parcels. On August 1, 1879, Caleb Warner and Charles Smith sold the corner lot at Hereford, with a frontage of 35 feet on Commonwealth, to Mary Elizabeth (Dana) de Cordova, the wife of Julian de Cordova, a tea broker and investor. The land remained vacant and was purchased on May 2, 1885, by Jane (Hunnewell) Sargent, the wife of Francis Williams Sargent. The Sargents built their home at 40 Hereford.

Also on August 1, 1879, Caleb Warner and Charles Smith sold the remainder of their land on the south side of Commonwealth between Gloucester and Hereford to William Dudley Pickman and Jacob Crowninshield Rogers. William D. Pickman was a shipping merchant; he and his wife, Caroline (Silsbee) Pickman, lived at 15 Commonwealth. Jacob C. Rogers was a merchandise broker and agent for the North Bedford Copper Company, and later would become agent for the banking firm of J. S. Morgan & Co. of London. He and his wife, Elizabeth (Peabody) Rogers, lived at 89 Marlborough.

On September 15, 1880, William D. Pickman and Jacob C. Rogers sold two 25 foot lots to the west of those they sold to the Shapleighs to building contractor Uriah H. Coffin. He built 300-302 Commonwealth for speculative sale (there is no house numbered 292 Commonwealth).

On March 11, 1881, William D. Pickman and Jacob C. Rogers sold the remainder of their land, with a frontage of 104 feet 7½ inches, to Charles Wilder Pierce, a former dry goods merchant and secretary/treasurer of the Atchison, Topeka & Santa Fe Railroad. He and his wife, Mary Fletcher (Horton) Pierce, lived at 64 Commonwealth.

On November 14, 1888, Charles Pierce sold a 50 foot lot to the west, abutting 40 Hereford, to Joseph Feldman, a builder, and James N. Thompson, a real estate dealer, and on the same day it was acquired from them by real estate dealer and auctioneer George Nason. He built an apartment house, The Imperial, at 308 Commonwealth.

On June 29, 1891, his estate sold the remainder of his land, a 54 foot 7½ inch lot between 302 Commonwealth and 308 Commonwealth, to David Greer, and on December 9, 1891, it was acquired from him by leather and morocco dealer David L. Webster (one-half undivided interest) and by a trust for the benefit of Mary (Moulton) Webster, the widow of John Gerrish Webster (David Locke Webster’s brother and business partner), and their children.

In September of 1895, Mary Alba Webster, the daughter of John and Mary (Moulton) Webster, married architect Henry Hyde Dwight. They built their home at 306 Commonwealth on the western 19 feet 7½ inches of the Webster family’s land.

Original Construction. All of the buildings on the south side of Commonwealth between Gloucester and Hereford had been built by 1896. 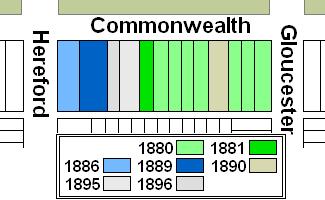 Neither the deed from the David Sears family to Nathan Matthews, nor the subsequent deeds conveying the undeveloped land on the south side of Commonwealth between Fairfield and Gloucester included any language restricting the type or physical characteristics of buildings built on the land.

However, on March 4, 1878, Caleb H. Warner and Charles F. Smith, Edwin Pope, and the Boylston National Bank of Boston, as owners of all of the land between Gloucester and Hereford and between Commonwealth and Newbury entered into an agreement (Book 1420, p. 282) establishing a twenty foot setback on Commonwealth and a twenty-two foot setback on Newbury, with “steps, windows, porticos, and other usual projections appurtenant to said front wall” allowed in the reserved space subject to dimensional limitations enumerated in the deed, which were the same as those included in the Commonwealth’s deeds. The agreement also provided for the creation of a sixteen foot passageway between the Commonwealth and Newbury blocks, consistent with the alleys laid out by the Commonwealth.

The 1876 agreement did not include the language contained in the Commonwealth’s deeds requiring that buildings be of a certain height, nor did it prohibit the use of buildings for stables, or for any mechanical, mercantile, or manufacturing purposes.

On January 2, 1871, the Sears family sold all of its land the Nathan Matthews (Book 1029, p. 233), including land on the south side of Commonwealth bounded on the east by the Commonwealth’s lands at a point 262 feet west of Exeter and bounded on the west by the Boston Water Power Company’s lands by a line that ran southwest at approximately a 45 degree angle, starting at a point on the south side of Commonwealth 134.66 feet west of Hereford. The land extended south by an irregular line past Boylston to about St. James Street.

On November 19, 1875, the trustees terminated the trust and transferred the land back to Harvey N. Shepard (Book 1303, p. 157).  On the same, Harvey Shepard conveyed the land to individual owners, including conveying the land between Gloucester and the boundary with the Boston Water Power Company’s lands to Nathan Matthews (Book 1303, p. 307).

On June 2, 1876, Nathan Matthews sold the land between Gloucester and Hereford by the following deeds. In all cases, the lots also included land on the north side of Newbury.

The parcel conveyed to Caleb H. Warner and Charles F. Smith had a frontage of 411.875 feet, and also included the 60 foot wide parcel on which Hereford Street would later be located and the western 90.25 feet of the block between Hereford and Massachusetts Avenue.