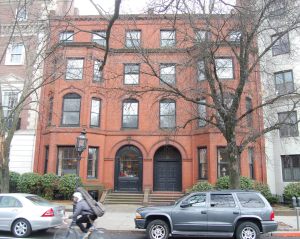 378-380 Commonwealth were designed by Peabody and Stearns, architects, and built in 1883-1884 by George F. Shepard, builder, a symmetrical pair of houses.   The houses were the first buildings on the south side of Commonwealth west of Massachusetts Avenue, built for The Park Entrance Lands Trust on part of the land the trust had purchased on October 15, 1880, from the Boston Water Power Company. The trust is shown as the owner on the original building permit for the two houses, dated October 17, 1883.

The Park Entrance Lands Trust was formed by a group of investors to purchase, develop, and dispose of four parcels of land they acquired from the Boston Water Power Company. The parcels included all of the land on the south side of Commonwealth running west from a point about 24 feet west of Massachusetts Avenue to the intersection with Beacon Street, and south to Westland Avenue. The group called themselves The Park Entrance Lands Trust because their property included park land south of Commonwealth between what are now Charlesgate East and Charlesgate West, land which was designated as the Beacon Street entrance to the new Back Bay Park (now the Back Bay Fens).

The trust was managed by three trustees: Grenville Temple Winthrop Braman, Henry Dwight Hyde, and Henry Melville Whitney. Grenville T. W. Braman was forme treasurer of the Boston Water Power Company. Henry Hyde was an attorney and former state legislator. Henry Whitney was president of the Metropolitan Steamship Company, organizer of the West End Street Railway, and the founder or organizer of several coal mining and iron and steel companies.

The two houses were separate residences until the late 1920s. On March 23, 1923, the Harvard Club of Boston, located at 374 Commonwealth, purchased 380 Commonwealth.  After leasing it as a lodging house for several years, in September of 1927 the Club applied for (and subsequently received) permission to convert it into an annex to provide additional bedrooms for its members and guests. This permitted the club to remodel 374 Commonwealth, moving its billiard and card rooms to the third floor (where there previously were bedrooms) and create a new grill room where the billiard room was formerly located.

On June 12, 1929, the Club purchased 378 Commonwealth. It remodeled the building and combined it with 374 and 380 Commonwealth, cutting connecting doors in the party walls.

The Harvard Club remained in this configuration, with periodic remodeling and modifications to the rear parking area, until 2014.

In 2013, the Club embarked on a plan to sell 378-380 Commonwealth for development as residential condominiums, while retaining ownership of a portion of the buildings on the first floor and basement levels for its dining room and other facilities.

378 Commonwealth was purchased on April 21, 1885, from The Park Entrance Lands Trust by Col. Albert Augustus Pope. He and his wife, Abbie (Linder) Pope, made it their home. They previously had lived in Newton.

Col. Pope was a pioneer bicycle manufacturer, maker of the Columbia bicycle. His Pope Manufacturing Company was located at 221 Columbus. From 1897 to 1899, his company also produced electric vehicles, and from 1903 it manufactured gasoline powered automobiles (the Pope-Hartford, Pope-Toledo, and others).

In April of 1892, the Popes purchased a home on Jerusalem Road in Cohasset, the former property of Asa Perkins Potter of 29 Fairfield, who had assigned it to Henry D. Hyde (the Popes’ neighbor at 380 Commonwealth) and Thomas N. Hart as trustees for the benefit of his creditors. Asa Potter had been president of the Maverick National Bank, which failed in October of 1891.

For the next four seasons, they leased 378 Commonwealth to the Curtis-Peabody School for Girls, operated by Miss Elizabeth E. Curtis and Miss Lucy G. Peabody. Miss Curtis lived in Brighton; Miss Peabody lived in Roxbury. The school previously had located at 91 Newbury. The Curtis-Peabody School continued to operate at 378 Commonwealth until 1906, when it moved to 507 Beacon.

During this period, the Popes lived in New York City and Cohasset, spending the 1904-1905 winter season at 306 Commonwealth.

The Popes resumed living at 378 Commonwealth by the 1906-1907 season. In mid-1907, the Pope Manufacturing Company and its automobile manufacturing subsidiaries went into receivership. The obligations subsequently were met and the companies continued operation.

Albert Pope died in August of 1909. Abbie Pope continued to live at 378 Commonwealth until her death in May of 1929.

Prior to Abbie Pope’s death, the Harvard Club had secured an option to purchase 378 Commonwealth, and on June 12, 1929, it acquired the property from the Pope estate. The Club subsequently remodeled the building and combined it with its original clubhouse at 374 Commonwealth and its annex at 380 Commonwealth. 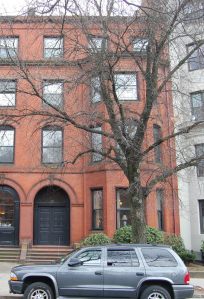 380 Commonwealth was purchased on February 15, 1886, from The Park Entrance Lands Trust by William A. Sargent, a lawyer. On the same day, he transferred the property to Henry Dwight Hyde, one of the three trustees of The Park Entrance Lands Trust.  Henry Hyde and his wife,  Luvan Augusta (Charles) Hyde, made it their home. They previously had lived at 662 Tremont.  They also maintained a home in Cohasset.

Henry Hyde died in April of 1897. In his will, he left all of his real property, including 380 Commonwealth, to his wife.

Anna Farwell Hyde died in April of 1915. Henry Webb Hyde, a chemical manufacturer, married in June of 1915 to Lucile (Lucetta) M. Chapon and moved to Athol.

Luvan (Charles) Hyde died in August of 1922. Benjamin, Louvan, and Alice Hyde continued to live at 380 Commonwealth during the 1922-1923 winter season, but moved thereafter to The Charlesgate at 535 Beacon.

On March 23, 1923, 380 Commonwealth was purchased from Luvan Hyde’s estate by the Harvard Club of Boston.

In September of 1927, the Harvard Club applied for (and subsequently received) permission to remodel 380 Commonwealth into an annex to provide additional bedrooms for its members and guests.