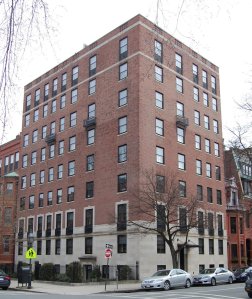 276 Marlborough (16 Fairfield) was designed by Bigelow, Hubbard, Wadsworth, and Smith, architects, and built in 1930 as an eight story, eight unit apartment house with a ninth unit in the basement for the building superintendent.

276 Marlborough replaced a townhouse at 16 Fairfield which was acquired on January 9, 1930, by real estate dealer Henry C. Brookings. The original building permit application for the new building had been submitted the previous month, on December 13, 1929, by the 16 Fairfield Trust.

Click here for an index to the deeds for 276 Marlborough.

On June 2, 1930, the property was acquired from Henry Brookings by real estate dealer Richard DeBlois Boardman as trustee of the Two Seventy Six Marlborough Street Trust.  The Trust razed the original townhouse and entered into new party wall agreements on June 2, 1930, with Gertrude Gannett, owner of 274 Marlborough, and on September 22, 1930, with Marie F. Johnson, owner of 18 Fairfield. Construction of the new building probably started at about this time.

The building was completed by the 1932-1933 winter season. It was listed as 276 Marlborough in the Blue Books and Lists of Residents, but continued to be assessed as 16 Fairfield.

On October 11, 1932, the Cambridge Savings Bank foreclosed on its mortgage to the Two Seventy Six Marlborough Street Trust and took possession of property, which it held for the next ten years.

On January 5, 1943, Katherine F. Ladd acquired 276 Marlborough from the Cambridge Savings Bank, and on the same day she transferred it to Margaret G. Donahue.

On June 6, 1944, 276 Marlborough was acquired from Margaret Donahue by real estate dealer and hotel operator Louis D. Ziman. He and his wife, Mary (Evanstein) Ziman, lived in Brookline.

On June 9, 1944, Louis Ziman transferred the property to the Ziman Realty Company, a partnership of Louis and Mary Ziman’s five children: Gertrude M. Saklad, wife of David Saklad, Celia D. Masters, wife of Edward R. Masters, Lillian G. Fleisher, wife of Theodore Fleisher, Martin Ziman, and Stanley Ziman.  On December 30, 1952, 276 Marlborough was acquired from the Ziman Realty Company by the Marston Realty Corporation, of which Stanley Ziman was president, and on February 3, 1955, it was acquired from Marston Realty by Land Realty, Inc., of which Stanley Ziman was president.

16 Fairfield was designed by architects Cabot and Chandler, and built in 1884-1885 by David Connery & Co., masons, and Samuel H. L. Pierce, carpenter, as the home of John Torrey Morse, Jr. and his wife, Fanny Pope (Hovey) Morse.  They previously had lived across the street, at 9 Fairfield, which they continued to own and lease to others. They also owned a stable at 326 Newbury, and maintained a home in Prides Crossing and a farm in Needham.

Fanny Morse purchased the land on which 16 Fairfield was built on June 4, 1883, from real estate dealer Samuel Horatio Whitwell.  It was part of a larger parcel originally purchased from the Boston Water Power Company on February 16, 1863, by Daniel Davies, Jarvis Dwight Braman, and Grenville Temple Winthrop Braman.  Grenville Braman was treasurer of the Boston Water Power Company, Jarvis Braman was his brother (and later president of the company), and Daniel Davies, a housewright and master carpenter, was Grenville Braman’s father-in-law.

John Torrey Morse, Jr., was an attorney, historian, and biographer.  He was a lecturer in history at Harvard in the late 1870s and for two years served with Henry Cabot Lodge as co-editor of the International Review.  He also was editor of the American Statesmen series of biographies.

Fanny Morse died in May of 1922 and he inherited 9 Fairfield and 16 Fairfield. Their unmarried son, John Torrey Morse, III, died in December of 1928.  John Torrey Morse, Jr.’s secretary, Charlotte Gertrude Silber, had lived on his Needham estate for a number of years and in 1929 he adopted her as his daughter, after which she took Morse as her surname. At about the same time, he made Needham his full time residence. He died in March of 1937.  In his will, he left the bulk of his estate to Charlotte Silber Morse, omitting entirely his remaining son, Cabot Jackson Morse, whom he noted was amply provided for, having inherited “almost half of the ample property of the Hovey family and also the property of my brother, Charles.  Therefore, he is amply provided for and indeed is much richer than I am.” 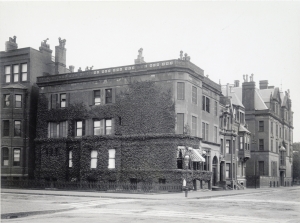