311 Beacon is located on the south side of Beacon, between Exeter and Fairfield, with 309 Beacon to the east and 313 Beacon to the west.

311-313-315-317-319 Beacon were built on a 100 foot wide parcel of land originally sold as four 25 foot lots by the Commonwealth of Massachusetts at its public auction on December 24, 1868. Dry goods merchant Eben Dyer Jordan, co-founder of Jordan, Marsh & Co., was the successful bidder for all four lots.

On April 25, 1870, Eben Jordan entered into an agreement with Frederick Pope under which Frederick Pope agreed to build at 311-313 Beacon “two Connecticut freestone front dwelling houses, one house to be twenty-four feet six inches wide, and the other to be seventeen feet in width, and of the dimensions and arrangements described by plans and specifications signed this day.” In the same agreement, Eben Jordan agreed to sell Frederick Pope the remaining land, to the west of 311-313 Beacon, with a frontage of 58 feet six inches.

On October 17, 1870, the Commonwealth conveyed Eben D. Jordan the eastern 50 feet of land, and on October 25. 1870, he conveyed the western 8 feet six inches to Frederick Pope. Eben Jordan also transferred his right to purchase the western two 25 foot lots to Frederick Pope, and he acquired them directly from the Commonwealth on October 10, 1870, and October 27, 1870. Once the houses were built, Eben Jordan sold 311 and 313 Beacon, and Frederick Pope sold 315-317-319 Beacon.

Click here for an index to the deeds for 311 Beacon, and click here for further information about the land between the south side of Beacon and Alley 417, from Exeter to Fairfield.

On May 4, 1872, 311 Beacon was purchased from Eben Jordan by Helen Susan (Henry) Prince, the wife of Frederick Octavius Prince. They previously had lived at 8 St. James. They also maintained a home in Winchester.

Frederick O. Prince was an attorney.  He served as a member of the Massachusetts State Legislature and as Mayor of Boston in 1877 and again from 1879 to 1881.  He was an unsuccessful Democratic candidate for Governor in 1885 and in 1896.

On August 15, 1873, the Boston Traveller reported that “Hon. F. O. Prince has made an arrangement with Messrs. D. H. Jacobs & Son to build a brick edition [sic] to his elegant residence, No. 311 Beacon street, on the east side, between Exeter and Dartmouth [sic]. The structure in question is to be 17 feet wide by 17 feet deep.” If the addition was built, it probably was the two story brick ell at the rear of the house.

Frederick Prince continued to live at 311 Beacon and later that year ran unsuccessfully as the Democratic party candidate for Governor against incumbent George D. Robinson. A November 1, 1885, Boston Herald article on Frederick Prince included a description of the interior of 311 Beacon. “It is a handsome house, both inside and out, but quite unpretending. To the left of the long hallway, as the visitor enters, is the parlor, and back of the parlor a large library, with bookcases running all around it. In the rear is the dining room. Above the dining room is another library, filled with books, at one end of which is a little room which Mr. Prince calls his ‘den.’ Here the ex-mayor passes his most delightful hours, alone with his books – of which 1000 perhaps are scattered about the floor, or piled in reckless disorder on the shelves. Here no one dares intrude, and the very cobwebs on the walls are sacred. …”

Frederick Prince remarried in November of 1889 to Kate (Hyman) Blanc, the widow of Samuel Peters Blanc, a lawyer in New Orleans.  After their marriage, they lived at 311 Beacon until his death in June of 1899.

During the 1899-1900 winter season, 311 Beacon was the home of John Murray Brown and his wife, Caroline Lane (Lamson) Brown. He was a publisher with his family’s firm, Little, Brown & Co. They had lived at 131 Beacon during the previous season.  Their primary residence was in Belmont.

On May 7, 1902, 311 Beacon was offered for sale at public auction. The auction notice by Edward Hatch, auctioneer, published in the Boston herald, noted that “the internal arrangements are such that it is admirably adapted for a physician.  It has front and back stairs, lavatory leading from hall.  On main entrance floor are parlors with folding doors, centre hall, dining room, large office or study…”.

The successful bidder for the property was the MIT Chapter of the Sigma Chi fraternity, which took title to the property from Frederick Prince’s estate on June 7, 1902. It previously had been located at 1902 Huntington Avenue. The fraternity continued to occupy 311 Beacon during the 1907-1908 winter season, but moved thereafter to 1067 Beacon in Brookline.

On September 21, 1908, 311 Beacon was acquired from J. Sumner Draper by Dr. Edwin Allen Locke as his home and medical office.  He was joined by Dr. Wilder Tileston, who also lived and maintained his office there.  They both were physicians specializing in internal medicine and members of the Harvard Medical School teaching staff.  They previously had lived and maintained their offices at 117 Beacon.

Edwin Locke married in December of 1908 to Elizabeth Gilmore Ferguson, and they lived at 311 Beacon after their marriage.  At about the same time, Dr. Tileston moved to New Haven to become a professor at Yale Medical School.

During the 1909-1910 winter season, the Lockes were joined by Dr. Joseph Hersey Pratt, a physician, and his wife, Rosamond Means (Thomson) Pratt.

By April of 1910, the Pratts had moved next door to 313 Beacon, and John Whicher, a bond broker, was a lodger with the Lockes.  He continued to live there until his marriage in April of 1913 to Helen Louise Stearns.  After their marriage, they lived in Brookline.

In July of 1919, Dr. Locke applied for (and subsequently received) permission to build a “small addition” at the rear, install a new elevator, and cut a new window in the rear ell.  These alterations apparently were made to enable the property to be converted entirely into medical offices.

Edwin Locke continued to maintain his office at 311 Beacon, and in the fall of 1921, he invited Dr. George Richards Minot and Dr. Gerald Blake to join with him in what may have been the first organized group practice in Boston. 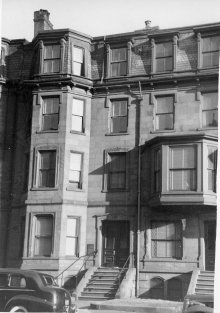 Francis M. Rackemann describes the innovation of a group practice in his biography of George Richards Minot, The Inquisitive Physician:

“Dr. Locke had plenty of room for offices on the two lower floors of his house at 311, and the place was only a block away from 188 Marlborough [where Dr. Minot maintained his office with his father, Dr. James Jackson Minot]. To set up a good laboratory, to have secretaries and typewriters in common, as well as complete sets of medical journals, would lead to greater efficiency and economy for all concerned. If one man were away at a meeting, or on vacation, his patients would be taken care of. The idea was very appealing. Blake, Locke, and Minot — the names arranged alphabetically, were the Associates, and Articles of Agreement, concerned chiefly with the finances, were drawn up by a lawyer and signed by all parties.”

Edwin Locke retired from practice in September of 1935 to become Professor of Hygiene and Director of Health and Athletics at Williams College. The Lockes continued to own 311 Beacon, which remained medical offices.

From about 1930, the building superintendent, Manuel Frederick Castle and his wife, Josie (MacDougall) Castle, lived in an apartment at 311 Beacon. They previously had lived in Topsfield, where he had been an engineer at a sand and gravel company.

311 Beacon remained medical offices with one apartment. Manuel and Josie Castle continued to live at 311 Beacon (and he to be the building superintendent) until about 1951.

On July 31, 1951. 311 Beacon was acquired from Ninety Kilsyth Road, Inc., by James Leo O’Connor and his wife, Helen Frances (Moran) O’Connor. They lived in Franklin, where he was associate justice of the Western Norfolk District Court and also published the County Recorder, a weekly newspaper published in Dedham.

On November 16, 1951, 311 Beacon was acquired from the O’Connors by William Lloyd Garrison Brown, a personnel manager. He and his wife, Alice Margaret (Kent) Brown, made it their home. They previously had lived at 76 Monument.

The property changed hands and on March 1, 1966, was acquired by Anthony Wine. The next day, he transferred it to his father, Philip W. Wine (Wein), a retail shoe merchant in Gloucester.

Anthony Wine married that year to Shirley Jean Smith, and they made 311 Beacon their home. They operated it as a lodging house and, by 1967, also operated a lodging house at 463 Beacon. They continued to live at 311 Beacon until about 1970, when they moved to 57 Hemenway.

On June 23, 1976, Philip Wine transferred 311 Beacon to Anthony and Shirley Jean Wine. It continued to be a lodging house.

On March 13, 1989, 311 Beacon was acquired from the Wines by Denis Palmisciano, trustee of the 311 Beacon Street Realty Trust. The legal occupancy of 311 Beacon continued to be a single-family dwelling and lodging house, although it was described as being an apartment building with fifteen units in a document filed in 2003.

311 Beacon continued to be assessed as an apartment house in 2020.