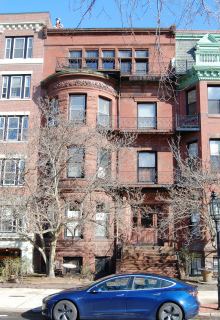 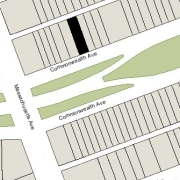 343 Commonwealth was designed by Bradlee, Winslow, and Wetherell, architects, and built  1882-1883 by Woodbury & Leighton, masons, and Morton & Chesley, carpenters, for George Glover Crocker and his wife, Annie Bliss (Keep) Crocker.  He is shown as the owner on the original building permit application, dated August 30, 1882.

George Crocker purchased the land for 343 Commonwealth on May 6, 1882, from Fanny Pope (Hovey) Morse, the wife of John Torrey Morse, Jr. They lived at 9 Fairfield. She had purchased the land on October 20, 1879, from Grenville T. W. Braman, Henry D. Hyde, and Henry M. Whitney, trustees of a real estate investment trust that had purchased several parcels of land on March 1, 1872, from the Boston Water Power Company.

By the 1883-1884 winter season, George and Annie (Keep) Crocker had made 343 Commonwealth their home. They previously lived at 74 Boylston. They also maintained a home in Cohasset.

George Crocker was an attorney. He was a Massachusetts State Senator from 1880 to 1884, and subsequently served as a member of the Massachusetts Railroad Commission.

George Crocker, Jr., was a lawyer in his father’s firm. He married in June of 1905 to Julia Hurd Hutchins. After their marriage, they lived in an apartment at 386 Commonwealth and then in Cohasset.

Courtenay Crocker, also a lawyer, married in February of 1912 to his first cousin, once removed, Clara Ballard Crocker (the daughter of George Uriel Crocker). After their marriage, they lived at 503 Audubon Road.

Margaret Crocker married in April of 1912 to Delano Wight, a lawyer. After their marriage, they lived in Brookline and Cohasset.

George Crocker, Sr., died in May of 1913. Annie Crocker continued to live at 343 Commonwealth with their two unmarried children, Muriel and Lyneham Crocker. She also continued to maintain a home in Cohasset.

On January 7, 1914, the five Crocker children transferred their interest in 343 Commonwealth, as inherited from their father, to Annie Crocker.

Lyneham Crocker married in June of 1915 to Mary Thorndike. After their marriage, they lived at 483 Commonwealth. He later became a manufacturer of electric heating equipment and an investment counselor.

On July 30, 1930, 343 Commonwealth was purchased from Annie Crocker’s estate and heirs by Charles H. Hemenway.  In August of 1930, real estate dealer Edward J. Ball applied for (and subsequently received) permission to convert the property from a single-family dwelling into seven apartments.

On April 10, 1931, the Institution for Savings in Roxbury foreclosed on its mortgage to Charles Hemenway and took possession of the property.

On July 1, 1931, 343 Commonwealth was acquired from the Institution for Savings in Roxbury by the Garland School of Home Making (later to become Garland Junior College). It had acquired 341 Commonwealth one month earlier.

Both properties were shown as vacant in the 1931-1933 City Directories, but had been converted into dormitories by 1934.

In May of 1981, the Commonwealth College Trust filed for permission to convert 343 Commonwealth from a dormitory into seven apartments, which it stated was the existing use.  It subsequently abandoned the application.

In November of 1983, the 337-339 Commonwealth Avenue Trust applied for (and subsequently received) permission to convert 343 Commonwealth into eight apartments, which it indicated was the existing condition.