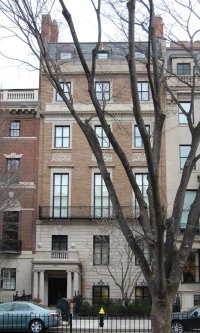 411 Commonwealth was designed by Little and Browne, architects, and built in 1899-1900 for Robert Stow Bradley and his wife, Leslie (Newell) Bradley. He is shown as the owner of 411 Commonwealth on the original building permit application, dated June 8, 1899.

The rear of the lot on which 411 Commonwealth was built extends north to Marlborough Street and has a secondary street address of 460 Marlborough.

Leslie Bradley purchased the land for 411 Commonwealth on March 14, 1895, from a trust established under the will of William Dudley Pickman for the benefit of his wife, Caroline (Silsbee) Pickman, his son, Dudley Leavitt Pickman, and his grandson, William Pickman Wharton (the son of William Fisher Pickman and Fanny (Pickman) Wharton, who had died in October of 1880). The land had been owned by Dudley Leavitt Pickman, and he had transferred it to the trust on April 15, 1890 (he was one of the trustees, along with his brother-in-law, William F. Pickman, and Walter Hunnewell).

Dudley Pickman had purchased the lot at 411 Commonwealth on April 12, 1888, from Walter Hunnewell. It was the eastern portion of a 125 foot wide lot running west to Charlesgate East that Walter Hunnewell had purchased on December 21, 1885, from a real estate investment trust formed by Francis W. Palfrey, Francis A. Osborn, and Grenville T. W. Braman. The lot was part of a tract of land the trust had purchased on June 1, 1880, from the Boston Water Power Company.

When the trustees sold the lot to Walter Hunnewell, they included language prohibiting the use of any building on the land as a stable. 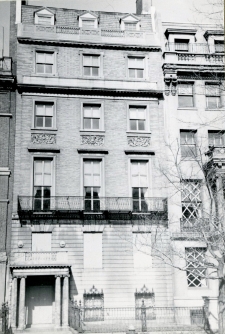 By the 1901-1902 winter season, Robert and Leslie (Newell) Bradley had made 411 Commonwealth their home. They previously had lived at 255 Marlborough. They also maintained a home, Pinehurst, in Pride’s Crossing, designed by architect Arthur Little (the original house was built in 1895-1896 and destroyed by fire; the Bradleys rebuilt it in 1900-1901).

Robert Bradley had served as president of the Bradley Fertilizer Company, founded by his father, until 1899, when it consolidated with a number of other companies into the American Agricultural Chemical Company. He became first vice president of the new company, and was named Chairman of the Board in 1906.

Leslie (Newell) Bradley died in March of 1919. Robert Bradley continued to live at 411 Commonwealth with his two unmarried daughters, Rosamond and Frances.

Frances Bradley married in April of 1919 to Talbot Coggeshall Chase, treasurer of a thread company. After their marriage, they lived in an apartment at 330 Dartmouth and later in Brookline.

Rosamond Bradley married in March of 1923 to Charles A. Rheault, an investment counselor. They had met in 1914, when Rosamond Bradley had been a member of Dr. Wilfred Grenfell’s mission to provide medical services to the native populations in Labrador, and he had been serving with the Royal Northwest Mounted Police, working in the arctic regions. During World War I, she was a Red Cross nurse and he was a Captain in the Royal Canadian Dragoons, and they had remained in contact. After their marriage, they lived in Brookline.

Robert Bradley continued to lived at 411 Commonwealth, and in about 1926 he was joined by Charles and Rosamond Rheault.

Robert Bradley married again in January of 1927 to Mrs. Florence Heights (Sartori) Thornton Johnson, the former wife of Horace George Thornton and widow of Guy Black Johnson. After their marriage, they lived at 411 Commonwealth and in Prides Crossing.

Charles and Rosamond Rheault moved to Westwood in about 1928.

In the fall of 1932, Florence Bradley filed for a legal separation and they subsequently lived apart. Robert Bradley continued to live at 411 Commonwealth and in Prides Crossing.

By the 1933-1934 winter season, he was joined at 411 Commonwealth by his first wife’s sister, Lavinia H. Newell. She previously had lived in an apartment at 12 Commonwealth. She was a leader of the Boston Red Cross. She died in May of 1934. 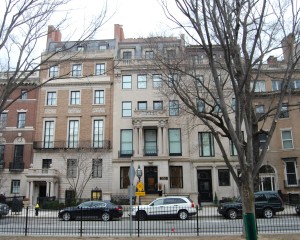 Robert Bradley continued to spend the winter seasons at 411 Commonwealth until the early 1940s, when he made his home in Prides Crossing his year-round residence.

On October 9, 1944, 411 Commonwealth was purchased from Robert Bradley by the Garland School of Homemaking (later Garland Junior College). It also owned 409 Commonwealth as well as 337-343 Commonwealth and 413-415 Commonwealth.

In November of 1944, Garland School filed for (and subsequently received) permission to convert 411 Commonwealth from a single-family dwelling into classrooms, an assembly hall, offices, and a janitor’s suite.

In March of 1952, Garland School acquired 407 Commonwealth, and in May of 1954, it filed for (and subsequently received) permission to convert it into a dormitory and cut openings in the party wall, connecting it with 409 Commonwealth.

In April of 1976, Garland Junior College announced that, because of financial difficulties, it was merging with Simmons College. It subsequently sold twelve of its properties and on October 21, 1977, it transferred the remainder – those located furthest west (407-415 Commonwealth, 24 Charlesgate East, and 451 Marlborough) – to Simmons College.

In the early 2000s, Simmons College embarked on a longterm plan to expand its Fenway campus and sell its properties in the Back Bay. In 2002, it moved its School of Social Service from 49-51 Commonwealth, which it sold, and in 2005 it began designing a new School of Management building at the Fenway campus to centralize the programs housed in its buildings in the western portion of the Back Bay.

On June 28, 2005, Simmons College sold those buildings — 451 Marlborough, 407-415 Commonwealth, and 24 Charlesgate East — to Terra Green II LLC (formed by Terra Mark Development of New York and local partners). The proceeds from the sale were used to finance construction of a new school of management building. Simmons College continued to occupy several of the Back Bay buildings until the new building was completed.

In January of 2011, HD 407-411 LLC filed for (and subsequently received) permission to consolidate 407, 409, and 411 Commonwealth into one property, with the address of 409 Commonwealth, remodeling them into twelve apartments and adding an interior garage. It subsequently filed for (and received) permission to reduce the number of units to eleven. 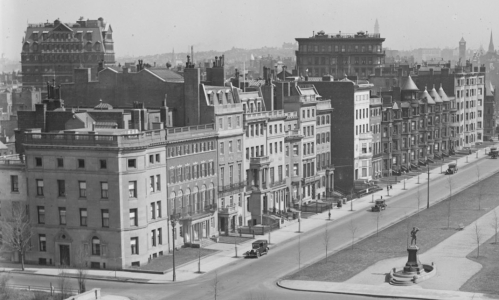