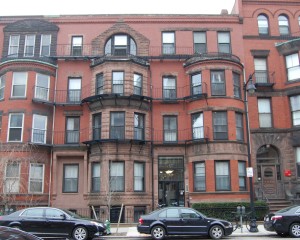 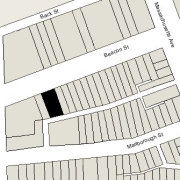 527-529 Beacon are located on the south side of Beacon, between Massachusetts Avenue and Charlesgate East, with 525 Beacon to the east and 531 Beacon to the west.

527 Beacon and 529 Beacon are two of ten contiguous houses (511-529 Beacon) designed by architect Samuel D. Kelley and built in 1887 for Chadwick & Stillings (N. Henry Chadwick and Oscar L. Stillings), a hat block and flange company that became a significant house building firm in the 1880s and 1890s. They are shown as the owners and builders on the original permit applications, all dated March 14, 1887, and on the final building inspection report for 529 Beacon, dated November 14, 1887. The next year, Chadwick & Stillings built one more house, also designed by Samuel Kelley, at 531 Beacon. 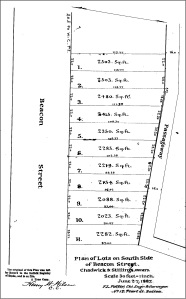 Click here for an index to the deeds for 527-529 Beacon, and click here for further information on the land west of Massachusetts Avenue between the south side of Beacon and the north side of Commonwealth.

Since 1908, 527 Beacon and 529 Beacon have been owned by the same owner and operated in the same manner. They were legally combined into one property in 1959. 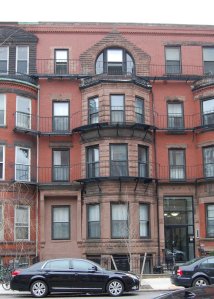 On November 1, 1887, 527 Beacon was purchased from N. Henry Chadwick and Oscar Stillings by Francis Manning Stanwood. He and his wife, Louisa Blair (Rogers) Stanwood, made it their home. They previously had lived at 163 West Chester Park. They also maintained a home in Manchester, Massachusetts.

Francis Stanwood was a merchant. In the mid-1890s, he became manager and editor of the Boston Journal (it had been owned by his father-in-law, Col. Charles O. Rogers, who died in 1869). By 1898, he was president of the Hotel and Railroad News Company.

On March 6, 1888, 529 Beacon was purchased from N. Henry Chadwick and Oscar Stillings by George Oliver Carpenter, a paint and varnish manufacturer and general insurance agent. He and his wife, Maria Josephine (Emerson) Carpenter, lived at 10 Union Park in 1889 and before, and at the Hotel Kensington (687 Boylston) in 1890 and later; it does not appear that they ever lived at 529 Beacon.

On May 27, 1889, 529 Beacon was acquired from George Carpenter by Elizabeth (Fitzpatrick) Washburn, the wife of John M. Washburn. They previously had lived at 423 Beacon. 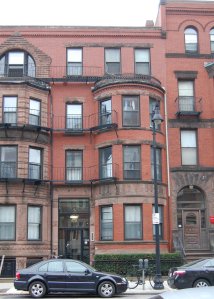 John Washburn was treasurer of the Old Colony Railroad, having held the position for a number of years. In September of 1893, an investigation revealed that he had embezzled a significant amount of funds from the railroad to make speculative and unsuccessful stock investments. He resigned and, to cover the losses, he assigned all of his property to the railroad (not including 529 Beacon, which was owned by his wife). He died two months later, in November of 1893.

During the 1894-1895 winter season she was living elsewhere and 529 Beacon was the home of Mrs. Frances N. Taylor. She previously had lived in an apartment at 224 Marlborough.

Elizabeth Washburn resumed living at 529 Beacon during the 1895-1896 season, joined briefly by Frank D. Balderston and his wife, Clara E. (Banchor) Balderston, who had married in November of 1895. He was head of the Boston Office of the U. S. Rubber Company. The Balderstons moved soon thereafter to Trinity Court (southeast corner of Dartmouth and Stuart).

Elizabeth Washburn continued to live at 529 Beacon during the 1896-1897 season, but moved thereafter.

On December 6, 1896, the “Table Gossip” column in the Boston Globe reported that Charles Winthrop Morse and his wife, Emily M. (Millet) Morse, were spending the winter season at 529 Beacon. Their usual residence was 220 Savin Hill in Dorchester. He was treasurer of a plumbing supply company.

On November 19, 1897, 529 Beacon was acquired from Elizabeth Washburn by William Alexander Gaston. He and his wife, May Davidson (Lockwood) Gaston, lived at 587 Beacon, and do not appear to have occupied 529 Beacon. He was a lawyer and president of the Boston Elevated Railroad, and later would become an organizer and president of the National Shawmut Bank.

On January 20, 1899, 529 Beacon was acquired from William A. Gaston by Dr. Fred Bates Lund. He and his wife, Zoe Meriam (Griffing) Lund, made it their home. They previously had lived at 122 Marlborough. They also maintained a home in Scituate.

Fred Bates Lund was a physician and surgeon, and he maintained his medical office at 529 Beacon.

On May 26, 1908, Fred Bates Lund acquired 527 Beacon from Francis Stanwood. Dr. Lund moved his his office there and leased lodgings and offices to other physicians.

Between about 1914 and 1920, 527 Beacon appears to have been primarily medical offices.

By the 1921-1922 winter season, however, 527 Beacon also was the home of Stephen H. Bennett, a stockbroker. He was a widower and previously had lived at 329 Commonwealth. He continued to live at 527 Beacon until about 1929, when he moved to The Charlesgate at 535 Beacon.

Fred Bates Lund continued to maintain his medical office at 527 Beacon, joined in about 1920 by Dr. Edward Wyllys Taylor, a professor at Harvard Medical School and physician. Dr. Taylor lived at 457 Marlborough and previously had maintained his offices there. He continued to maintain his office at 527 Beacon until about 1926, when he moved them back to his home.

The Lunds continued to live at 529 Beacon and he to maintain his medical office at 527 Beacon until about 1929. They subsequently moved to Newton Centre and he moved his office to 319 Longwood Avenue.

On September 3, 1929, 527-529 Beacon were acquired from George Maloof by Katherine (Catherine) E. (O’Connor) Finnegan, the widow of Thomas E. Finnegan. She lived at 529 Beacon with her son, Joseph J. Finnegan, and operated both 527 and 529 Beacon as a lodging house . They previously had lived at 856 Beacon.

Katherine Finnegan continued to live at 529 Beacon until her death in January of 1938.

Joseph Finnegan married in 1939 to Alice E. Wright. After their marriage, they lived at 529 Beacon and continued to operate the lodging houses at 527-529 Beacon.

On November 18, 1942, the Institution for Savings in Roxbury and Its Vicinity foreclosed on mortgages it held on 527-529 Beacon and took possession of the property.

On March 1, 1945, 527-529 Beacon were acquired from Jean Coates and Henry Bisson by Mrs. Lillian Carmela (Barbanti) Luderer, the former wife of Walter P. Luderer, who operated them as lodging houses. She previously had lived at 323 Beacon.

In July of 1945, Lillian Luderer filed for (and subsequently received) permission to legalize the occupancy of 529 Beacon as a lodging house. The application appears to have been intended to include both 527 and 529 Beacon.

In 1944, when had Jean Coates purchased and moved to 527-529 Beacon, Mrs. Eva Lussier, the wife of Frederick Joseph Lussier, moved there as well. She had been a lodger at 162 St. Botolph (operated by Jean Coates).

After Jean Coates sold 527-529 Beacon in 1945 to Lillian Luderer, Eva Lussier continued to live at 529 Beacon and, it appears, it was she who managed them as lodging houses. After the war, she was joined there by her husband. They continued to live there until about 1960.

On November 15, 1951, was acquired from Lillian Luderer by Leon H. Jenanyan. He lived at 33 Upton with his brother and sister-in-law, Ralph A. Jenanyan and Mary (Tamoosch) Jenanyan. They operated the Rajer Luncheonette at 810 Beacon.

On July 29, 1953, 527-529 Beacon was acquired from Emil Sztucinski and Martin Gaykan by Jack (Jacob) Frager and his wife, Betty (Rebecca) (Simon) Frager. They lived at 527 Beacon. They previously had lived in Rhode Island.

Jack Frager died in September of 1954.

The property changed hands and was acquired on January 5, 1960, by Solomon Kolodny.

In December of 1959, he filed for (and subsequently received) permission to combine 527 and 529 Beacon into a single property, with the address of 529 Beacon, and to convert the buildings into 25 apartments. In March of 1960, he amended the application to reduce the number of apartments to 23. As part of the remodeling, the entrance to 527 Beacon was converted into a window, and the entrance to 529 Beacon, serving both houses, was redesigned.  Plans for the remodeling, designed by architect Leon Furr, are included in the City of Boston Blueprints Collection in the Boston City Archives (reference BIN R-277).

On June 29, 1960, Solomon Kolodny transferred 527-529 Beacon to himself and his wife, Anita (Silverman) Kolodny, as trustees of the Ansko Realty Trust.

In July of 1961, Solomon Kolodny applied for (and subsequently received) permission to convert one of the basement apartments into an office for use by his real estate business.

On March 25, 1974, 527-529 Beacon was acquired from the Kolodnys by Peter V. Corea and William C. Corea, trustees of the Chandler School Trust. It appears that the school continued to operate the property as apartments.

On July 20, 1979, 527-529 Beacon were acquirted from the Chandler School Trust by Emerson College. In February of 1981, it filed for permission to convert the property into a dormitory. The permit was denied and Emerson College’s appeal was dismissed, and the property remained 22 apartments and a basement office.

The property changed hands and on August 30, 1988, was purchased by Charles Patsos, trustee of the 527 Beacon Realty Trust.

On January 6, 2021, 527-529 Beacon was purchased from Mohsen Vessali, successor trustee of the 527-529 Beacon Street Realty Trust, by the Ledermann US Real Estate Corporation.