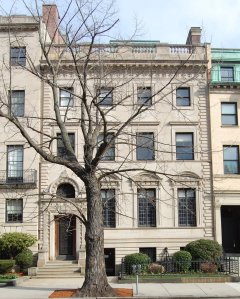 420 Beacon is located on the north side of Beacon, between Gloucester and Hereford, with 418 Beacon to the east and 422 Beacon to the west.

420 Beacon was designed by Peabody and Stearns, architects, and built in 1892-1893 by McNeil Brothers, carpenters, as the home of Miss Emily Esther Sears. She is shown as the owner of 420 Beacon on the original building permit application, dated November 22, 1892. In his Houses of Boston’s Back Bay, Bainbridge Bunting indicates that it may have been the first fireproof residence built in the Back Bay.

The land for 420 Beacon was purchased on May 12, 1887, by Emily Esther Sears’s mother, Emily Esther (Hoyt) Sears, the widow of David Sears.  She purchased the land from George Higginson, part of a 330 foot parcel he had purchased on January 14, 1884, from the Boston and Roxbury Mill Corporation.

Click here for an index to the deeds for 420 Beacon, and click here for further information on the land on the north side of Beacon, including the Storrow Memorial Embankment on the Esplanade.

Emily (Hoyt) Sears lived at 86 Beacon. She died in March of 1888 and the lot at 420 Beacon was inherited by her three unmarried children — Emily Esther Sears, David Sears, and Henry Francis Sears — who had lived with her at 86 Beacon. On December 3, 1892, David and Henry Sears transferred their interests in the land to their sister.

By the 1893-1894 winter season, Emily Esther Sears, David Sears, and Henry Sears had made 420 Beacon their home. They also maintained a home in Beverly.

Emily Esther Sears died in December of 1902. In her will, she left 420 Beacon to her brother, Henry.

David and Henry Sears continued to live at 420 Beacon. David Sears spent most of his time traveling and made his primary residence in Paris. He was unmarried.

Henry Sears was a retired physician. He married in September of 1904 to Jean Irvine Struthers. After their marriage they lived at 420 Beacon.

Henry and Jean Sears continued to live at 420 Beacon until about 1907, after which they made their home in Beverly. David Sears maintained his Boston residence with them.

On June 6, 1907, 420 Beacon was purchased from Henry Francis Sears by William H. Wellington, a dry goods merchant and cotton manufacturer. He was a widower, his wife, Florence (Florina) (Gray) Wellington, having died in March of 1900. Their daughter, Anna F. Wellington, lived with him. They previously had lived in Roxbury.

Anna Wellington married in June of 1914 to Dr. Simon Burt Wolbach, a physician and professor at Harvard Medical School specializing in pathology.  After their marriage, they lived at 420 Beacon with her father.  Dr. Wolbach previously had lived at 356 Marlborough. 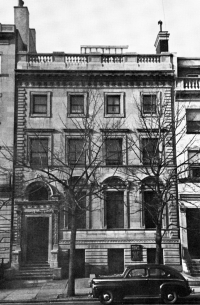 In November of 1915, William Wellington applied for (and subsequently received) permission to add a small penthouse located towards the front of the building at the center and east side, in front of the skylights, constructed with a steel frame filled in with terra cotta blocks.  Plans for the addition, designed by architects Peabody and Stearns, are included in the City of Boston Blueprints Collection in the Boston City Archives (reference BIN C-23).

On October 24, 1916, William Wellington joined with the owners of 416-418 Beacon and 422-426 Beacon in an agreement to “impose a uniform restriction on their estates which will prevent the erection of any building or other structure in the rear of any of the said estates which will further materially obstruct the light, air and prospect now enjoyed.” The agreement specified that, prior to January 1, 1937, no building more than one story high could be built north of a line 92 feet north of the building line established by City of Boston for Beacon Street (the building line required a 20 foot setback from the north side of Beacon).

William Wellington died in February of 1925 and 420 Beacon was inherited by his daughter. The Wolbachs continued to live at 420 Beacon. They also maintained a home in Ipswich and later in South Sudbury.

On September 8, 1925, Anna Wolbach joined with the owners of 422-424-426 Beacon and the vacant lot at 428 Beacon in an agreement to modify the 1916 restrictions on buildings in the rear of their properties, agreeing that no building more than one story high could be built north of a line 87 feet north of the building line established by City of Boston for Beacon Street (increasing by 5 feet the restricted area at the rear of the houses). The agreement specified that the right to erect and maintain one story stables in the rear of the houses remained in effect and that these structures could be used as garages for not more than two automobiles. Unlike the earlier agreement, no expiration date for the restrictions was set.

The Wolbachs continued to live at 420 Beacon during the 1934-1935 winter season, after which they made their home in South Sudbury.

On December 28, 1936, 420 Beacon was purchased from Anna Wolbach by the Vedanta Centre, sponsored by the Ramakrishna Mission of India.

That same month, the Vedanta Centre applied for (and subsequently received) permission to convert the property from a single-family dwelling into a church on the first floor and dwellings above.  On January 26, 1937, it dedicated the Temple of the Universal Spirit at 420 Beacon.

The Vedanta Centre and Temple of the Universal Spirit continued to be located there until about 1952.

On July 10, 1952, 420 Beacon was acquired from the Vedanta Centre by Muriel Audrey (Sutherland) Maclachlan, the wife of Andrew Dugald Maclachlan, Jr., an engineer. They previously had lived at 130 Chestnut.

In June of 1952, prior to taking title to the property, the Maclachlans had applied for (and subsequently received) permission to convert 420 Beacon from a church and dwelling into a church, seven apartments, and one lodging unit.

Although the designation of a church remained in the legal occupancy, it appears that the property was occupied entirely as a multiple dwelling.  By 1967, there were nine apartments listed in the Boston City Directory.

On August 10, 1971, the Massachusetts College of Optometry purchased 420-422–424–426 Beacon and the vacant lot at 428 Beacon from George Rohrbough and Rohrbough, Inc., successor to Chandler School. It continued to use 420 Beacon as a library and to rent the apartments on the upper floors.

In July of 1976, it changed its name to the New England College of Optometry.

In April of 1992, it applied for (and subsequently received) permission to consolidate 422 and 424 Beacon into one property, with the address of 424 Beacon.

In August of 1996, it applied for (and subsequently received) permission to consolidate 420 Beacon, 424 Beacon, and 426 Beacon into one property, with the address of 424 Beacon.  420 Beacon was used for the library, classrooms, and other college facilities.

In August of 1997, it applied for (and subsequently received) permission to convert 418 Beacon and a separate former stable at the rear from a dormitory into classrooms and other college functions.

The New England College of Optometry continued to be located there in 2017.