424 Beacon is located on the north side of Beacon, between Gloucester and Hereford, with 422 Beacon to the east and 426 Beacon to the west.

424 Beacon was designed by Julius A. Schweinfurth, architect, and built in 1904-1905 by McNeil Brothers, carpenters, one of two contiguous houses (424-426 Beacon) built for Ralph Blake Williams, a real estate trustee, and his sister, Ruth (Williams) Sears, the wife of Dr. George Gray Sears.

Ralph Williams purchased the 54 foot lot for 424-426 Beacon on May 31, 1904, from Frank W. Crocker. It was part of a 113 foot 6 inch parcel running east from the corner of Beacon and Hereford that Frank Crocker had purchased on behalf of his employer, Edwin Carlton Swift, co-founder of the meat packing firm of Swift & Co., who had considered building a home on it. Frank Crocker purchased the land from Oliver Ames through three transactions on March 31, 1896, August 9, 1897, and June 30, 1898.

Oliver Ames had purchased the 113 foot 6 inch parcel through series of purchases between November of 1893 and September of 1896. The eastern 81 feet of the land originally was part of a 330 foot parcel purchased by George Higginson on January 14, 1884, from the Boston and Roxbury Mill Corporation; the western 32 feet 6 inches had been purchased from the corporation by M. Woolsey Borland on December 7, 1882.

Click here for an index to the deeds for 424 Beacon, and click here for further information on the land on the north side of Beacon, including the Storrow Memorial Embankment on the Esplanade.

Combined architectural renderings of the front and rear elevations of 424-426 Beacon (1904), by architect Julius A. Schweinfurth; courtesy of the Boston City Archives, City of Boston Blueprints Collection

Architectural plans of 424-426 Beacon — including elevations, piling plans, floor plans, and framing plans — are included in the City of Boston Blueprints Collection in the Boston City Archives (reference BIN A-83).

While the two houses were being built, Ralph Williams and the Searses lived temporarily at 462 Beacon with Ralph Williams’s and Ruth Sears’s mother, Alice (Weld) Williams, the widow of merchant Thomas Blake Williams.

The houses were completed by the 1905-1906 winter season. Ralph Williams and his mother moved to 424 Beacon, and George and Ruth Sears moved to 426 Beacon.

In September of 1906, Ralph Williams married Susan Jackson of 462 Beacon. After their marriage, they lived at 31 Gloucester for several years, but by the 1908-1909 winter season, were living at 424 Beacon once again, with his mother. They also maintained a home in Cohasset and in 1909 built a second country home in Dover, Massachusetts.

Blueprint of the first floor of 424-426 Beacon (1904), by architect Julius A. Schweinfurth; courtesy of the Boston City Archives, City of Boston Blueprints Collection

On October 24, 1916, Ralph Williams joined with the owners of 416-422 Beacon and 426 Beacon in an agreement to “impose a uniform restriction on their estates which will prevent the erection of any building or other structure in the rear of any of the said estates which will further materially obstruct the light, air and prospect now enjoyed.” The agreement specified that, prior to January 1, 1937, no building more than one story high could be built north of a line 92 feet north of the building line established by City of Boston for Beacon Street (the building line required a 20 foot setback from the north side of Beacon).

Susan Williams moved soon thereafter to 459 Beacon; Alice Williams continued to live at 424 Beacon until her death in February of 1926.

On September 8, 1925, Susan Williams joined with the owners of 420-422 Beacon, 426 Beacon, and the vacant lot at 428 Beacon in an agreement to modify the 1916 restrictions on buildings in the rear of their properties, agreeing that no building more than one story high could be built north of a line 87 feet north of the building line established by City of Boston for Beacon Street (increasing by 5 feet the restricted area at the rear of the houses). The agreement specified that the right to erect and maintain one story stables in the rear of the houses remained in effect and that these structures could be used as garages for not more than two automobiles. Unlike the earlier agreement, no expiration date for the restrictions was set.

On March 23, 1927, 424 Beacon was purchased from Susan Williams by real estate dealer Charles W. Rowell. The transaction was reported by the Boston Globe on April 3, 1927, with the purchasers indicated as Fred Holdsworth and Robert D. Farrington, real estate dealers in the same officer as Charles Rowell.

On July 28, 1927, 424 Beacon was acquired from Charles Rowell by George A. Bell. He and his wife, Alice (Bailey) Bell, made it their home and operated it as a lodging house.

George Bell had been a box manufacturer in Illinois and Missouri; he and his wife moved to Boston after he retired in the mid-1920s.

On July 30, 1937, the Massachusetts Hospital Life Insurance Company foreclosed on its mortgage to George Bell and took possession of 424 Beacon.

Alice Bell continued to live at 424 Beacon until about 1938.

By 1939, 424 Beacon was the home of Mrs. Martha F. Poirier, who was the former wife of William J. Freund and used her maiden name. She operated it as a lodging house. In the mid-1930s, she had lived in Wakefield, where she operated the Wakefield Arms.

Martha Poirier continued to live at 424 Beacon until about 1941, when she moved to 16 Keswick.

On May 29, 1941, 424 Beacon was purchased from Massachusetts Hospital Life by James A. Cassidy, and on May 31, 1941, he transferred the property to his step-father and mother, James Bernard Regan and Susan (Susanna) M. Cassidy Regan. James Cassidy was the son of Susan Cassidy and her first husband, John T. Cassidy, who had died in May of 1928. The Regans and James Cassidy lived at 424 Beacon and operated it as a lodging house. They all previously had lived at 30 Welles in Dorchester.

James Regan owned “Regan’s Rooms,” a rooming house at 327 Tremont.  During World War I and the early 1920s, he had been a proprietor of the New Richwood Hotel at 254 Tremont (across from the Shubert Theatre) and then the Hotel Hollis at 247 Tremont. 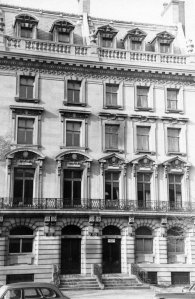 On April 18, 1955, 424 Beacon was purchased from the Regans by George Irwin Rohrbough, president of the Chandler School for Women, located at 448 Beacon.  He also owned the vacant lot at 428 Beacon. He and his wife, Martha Fraser (Waugh) Rohrbough, lived in Cambridge.

In July of 1956, he applied for (and subsequently received) permission to convert 424 Beacon from a lodging house into a school for use by the Chandler School.

In July of 1959, George Rohrbough acquired 426 Beacon and in August of 1959, Chandler School applied for (and subsequently received) permission to cut doors in the party wall between 424 and 426 Beacon to facilitate the use of both buildings by the school.

In June of 1961, Chandler School acquired 422 Beacon and in May of 1962, George Rohrbough applied for (and subsequently received) permission to cut doors in the party wall between 422 and 424 Beacon to facilitate the school’s use of both buildings.

In August of 1967, George Rohrbough acquired 420 Beacon. Chandler School used the first floor as a library and rented the apartments on the upper floors.

On August 10, 1971, the Massachusetts College of Optometry purchased 420–422-424-426 Beacon and the vacant lot at 428 Beacon from George Rohrbough and Rohrbough, Inc., successor to Chandler School. 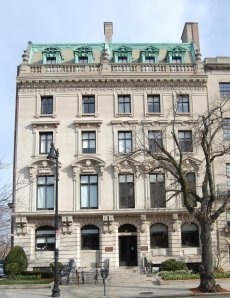 In May of 1971, George Rohrbough, as the seller under the purchase and sale agreement with the College, had applied for (and subsequently received) permission to convert 424 Beacon from a school into a college with a machine shop and accessory laboratories.  Similar applications for 422 and 426 Beacon were submitted and subsequently approved. The College continued to use 420 Beacon as a library and to rent the apartments on the upper floors.

In July of 1976, it changed its name to the New England College of Optometry.

In April of 1992, the College applied for (and subsequently received) permission to
consolidate 422 and 424 Beacon into one property, with the address of 424 Beacon.

In August of 1996, it applied for (and subsequently received) permission to consolidate 420 Beacon, 424 Beacon, and 426 Beacon into one property, with the address of 424 Beacon.  420 Beacon was used for the library, classrooms, and other college facilities.

In August of 1997, it applied for (and subsequently received) permission to convert 418 Beacon and a separate former stable at the rear from a dormitory into classrooms and other college functions.

The New England College of Optometry continued to be located there in 2021.