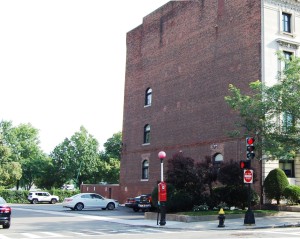 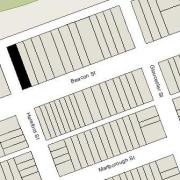 428 Beacon is located on the NE corner of Beacon and Hereford, with 426 Beacon to the east, 448 Beacon to the west, across Hereford, and 12 Hereford (433 Beacon) to the south, across Beacon.

428 Beacon is a vacant lot at the northeast corner of Beacon and Hereford. It is the only lot in the residential portion of the Back Bay which has remained undeveloped since the land was filled. Since 1950, it has been under the same ownership as 426 Beacon and has served as a parking lot.

The Boston and Roxbury Mill Corporation sold the 395 feet of land on the north side of Beacon between Gloucester and Hereford in three transactions: the eastern 32 feet 6 inches at the corner of Gloucester and Beacon to Harcourt Amory on April 20, 1881; the western 32 feet 6 inches at the corner of Hereford and Beacon to M. Woolsey Borland on December 7, 1882; and the 330 feet in between to George Higginson on January 14, 1884.

Click here for an index to the deeds for 428 Beacon, and click here for further information on the land on the north side of Beacon, including the Storrow Memorial Embankment on the Esplanade.

Harcourt Amory sold his land in April of 1892 to Susan Mason (Lawrence) Loring, the wife of William Caleb Loring, and the Lorings built their home at 2 Gloucester (404 Beacon) on it. George Higginson subdivided his parcel and sold it to individual buyers, some of whom purchased the land to build houses for themselves and others who resold it to subsequent buyers. 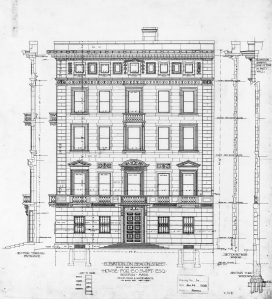 M. Woolsey Borland sold the 32 foot 6 inch corner lot at Hereford on December 8, 1884, to Ezra Henry Baker. On January 12, 1886, it was purchased from him by Charles Elliott Perkins. That same month, he also purchased an adjoining lot to the east, with a 27 foot 6 inch frontage on Beacon, from George Higginson, creating a 60 foot corner lot.

Charles E. Perkins was president of the Chicago, Burlington & Quincy Railroad. He and his wife, Edith (Forbes) Perkins, lived at 223 Commonwealth and also maintained a home in Burlington, Iowa. He may have purchased the land on Beacon in contemplation of building a new home. The land remained vacant, however, and on February 24, 1893, he sold it to the estate of William F. Weld.

Oliver Ames was treasurer of Oliver Ames & Sons, the pick and shovel business founded by his great-grandfather in North Easton, and an investor in real estate, railroads, and other businesses. He and his wife, Elise Alger (West) Ames, lived at 120 Beacon and then at 151 Commonwealth. They also maintained a home in North Easton.

In February and March of 1896, Oliver Ames, the trustees of the Weld estate, and Frank W. Crocker entered into a series of transaction whereby Oliver Ames purchased a 6 foot 6 inch strip of land from the Weld estate to increase his lot to 60 feet and then sold the 60 foot lot to Frank W. Crocker. At the same time, the Weld estate sold Oliver Ames the remainder of its land, the corner lot with a frontage of 53 feet 6 inches. On March 5, 1896, the Boston Globe reported on the transaction, noting that it was Oliver Ames’s “intention to erect a handsome residence on the site for his own occupancy.” The deed for the land was executed on September 3, 1896. The article also noted that Oliver Ames’s brother-in-law and sister, Robert Chamblet Hooper and Helen Angier (Ames) Hooper, lived on the opposite corner, across Hereford, at 448 Beacon.

Oliver Ames did not build at 428 Beacon and, instead, sold the land in two transactions to Frank W. Crocker, a 21 foot 6 inch lot to the east on August 9, 1897, and a 32 foot lot at the corner on June 30, 1898. Also in June of 1898, Oliver Ames purchased 15 Commonwealth, which remained Oliver and Elise Ames’s Boston home for the rest of their lives. 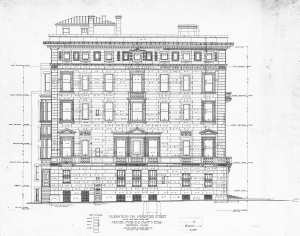 Combined with his earlier purchases from Oliver Ames, as of June 30, 1898, Frank Crocker owned the western 113 feet 6 inches of the block, comprising the lots for 422-424-426-428 Beacon. The June 30, 1898, purchase included the land at 428 Beacon and 6 inches of the land where 426 Beacon later would be built and included language, applicable to both 426 and 428 Beacon limiting the depth of any building built on the lot to no more than 87 feet from front to back, not including bay windows.

Frank Crocker was a clerk with the meat packing company, Swift Bros. & Co. (later known as Swift & Company), and was acting for Edwin Carlton Swift, who founded the company with his brother, Gustavus Franklin Swift.

On November 20, 1898, the Table Gossip column in the Boston Globe commented that the Swifts had cancelled plans to spend the winter season in Europe because they were planning to build “a new residence on the lower part of Beacon st, which Mr. Swift will have built this season.” March 9, 1899, the Boston Evening Transcript reported that the Board of Health had held a hearing on Edwin Swift’s petition for a brick stable at 428 Beacon and that no opposition was expressed.  And on April 1, 1899, The Engineering Record reported that “McKim, Mead & White…are said to be preparing plans for a $50,000 dwelling for E. C. Swift to be erected on Beacon and Hereford sts.” Copies of the plans — including elevations, floor plans, section drawings, framing, electrical, and plumbing plans – are included in the McKim, Mead and White Architectural Records Collection (reference PR 042) at the New York Historical Society.

However, the house was not built and, in about March of 1899, the Swifts purchased land in Pride’s Crossing where they built a home, Swiftmoore, designed by Arthur Little.

Frank Crocker subsequently sold the land on Beacon. On May 2, 1899, he sold the eastern 28 feet to Frances (Converse) Leland, the wife of Lester Leland, who had 422 Beacon built as their home, and on May 31, 1904, he sold the 54 feet to the west of the Leland’s house to Ralph Blake Williams, and he and his sister, Ruth (Williams) Sears, the wife of Dr. George Gray Sears, had their homes built on it at 424–426 Beacon.

The lot at the corner, with a 31 foot 6 inch frontage, remained vacant.

On December 9, 1913, the lot at 428 Beacon was purchased from Frank Crocker by Mabel De Carteret (Hunt) Slater, the widow of textile mill owner Horatio Nelson Slater, who lived at 448 Beacon on the northwest corner of Beacon and Hereford. According to an October 29, 1916, “Table Gossip” item in the Boston Globe, she “purchased it with the intention of developing it into an Italian garden” that “might enhance the attractiveness of her residence,” but “never carried out her idea.”

On October 13, 1916, the lot was purchased from Mabel (Hunt) Slater by Marie (Griffin) Dennett, wife of Carl Pullen Dennett. They lived at 250 Beacon and then at 332 Beacon.

Carl Pullen Dennett was vice president of the Griffin Wheel Company, makers of railroad car wheels (his father-in-law, Thomas A. Griffin, was the Chairman of the Board). Following World War I, Carl Dennett had served as American Red Cross Deputy Commissioner to Switzerland in charge of finding and caring for American prisoners in German camps. Upon his return, he became a trustee and banker in Boston, serving as president of the General Capital Corporation.

On May 4, 1922, it was purchased from Marie Dennett by real estate dealer Thomas G. Washburn, and on February 7, 1924, it was acquired from him by George Richmond Fearing, Jr., an investment banker, and Charles Theodore Russell, a real estate dealer and trustee.

George Fearing and Charles Russell appear to have planned to construct an apartment house on the lot. On September 8, 1925, they joined in an agreement with the owners of the houses at 420-426 Beacon specifying that no building more than one story high could be built north of a line 87 feet north of the building line established by City of Boston for Beacon Street (consistent with the deed restriction on 426-428 Beacon imposed by the June 30, 1898, deed from Oliver Ames). The agreement also specified that the main entrance of any apartment building constructed at 428 Beacon would be on Hereford Street and that there would be no more than one apartment per floor except on the first floor, where two there could be two apartments.

In November of 1925, the lot at 428 Beacon was acquired from George Fearing and Charles Russell by real estate dealer William J. Stober.  A December 17, 1925, report on the sale in the Boston Globe indicated that the property would be “improved with a modern structure.”

Advertisement by the American Bond & Mortgage Co. for the sale of bonds to finance construction of “The Hereford” at 428 Beacon; Boston Globe, 22Mar1926

In March of 1926, the lot at 428 Beacon was acquired from William Stober by the Beacon-Hereford Realty Corp. (Philip A. Hendrick, president, and Thomas D. Kennedy, treasurer). A March 20, 1926, Boston Globe article reported that “the ground has been broken for another first-class, modern, fireproof apartment building for this high-class residential section, to be known as The Hereford.” The article indicated that the building would be ten stories in height, with one apartment per floor on the upper floors and two on the first floor. The full-floor apartments would have nine rooms, “including living room, reception hall, dining room, kitchen, three master bedrooms, a maid’s bathroom, and a butler’s pantry.”

Financing for the project was provided by first mortgage bonds sold by the American Bond & Mortgage Company.

In July of 1927, the lot at 428 Beacon was acquired by Charles C. Moore, a vice president of the American Bond & Mortgage Company and stepson of its president, William J. Moore.

The building was not built.

In 1931, the officers of the American Bond & Mortgage Company – including William J. Moore and Charles C. Moore, along with William Moore’s sons, Harold A. Moore, treasurer, and Kenneth W. Moore, secretary – were indicted by grand juries in New York City and Boston for using the US mails to defraud in connection with other development projects for which they acted as financing agents. In September of 1931, the company declared bankruptcy.

On December of 1933, the lot at 428 Beacon was transferred to Frank M. McKey, trustee in bankruptcy for the American Bond & Mortgage Company, and in November of 1934, the City of Boston foreclosed on its tax lien and took possession of the property.

In December of 1945, the lot at 428 Beacon was purchased by Anna (Bravman) Davis, the wife of Edward I Davis, owner of the Fox and Hounds Club at 448 Beacon. The lot was used for parking for the club.

The Fox and Hounds Club ceased operation in early 1949 and 448 Beacon was acquired by George Irwin Rohrbough and his wife, Martha Fraser (Waugh) Rohrbough. He was president of Chandler School for Women, a secretarial school, and purchased 448 Beacon for use as a school building.

In May of 1949, Anna Davis applied for permission to convert the lot at 428 Beacon into public parking, noting that the Fox and Hounds Club had closed and the lot therefore was no longer needed for its use. Her application was denied and her appeal dismissed by the zoning Board of Appeal

In April of 1950, the Rohrbough’s acquired the lot at 428 Beacon from Anna Davis and used it for private parking for Chandler School. He and Chandler School subsequently acquired 420-422-424-426 Beacon.

In July of 1976, the College changed its name to the New England College of Optometry.

The lot at 428 Beacon remained the property of the New England College of Optometry in 2021.