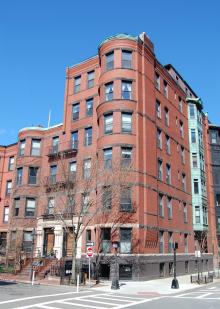 421 Marlborough and 423 Marlborough were designed by architect Samuel D. Kelley and built in 1889-1890 by Keening and Strout Brothers, builders, for Edwin B. Horn, Jr., a jeweler and real estate developer who lived at 11 Greenwich Park. 421 Marlborough was built as a six story, six unit apartment house, and 423 Beacon was built as a four story, four unit apartment house. Edwin Horn is shown as the owner on the building permit applications for both buildings, both dated November 26, 1889, and on the final building inspection report for 421 Marlborough, dated May 27, 1890.

Edwin Horn purchased the land for 421-423 Marlborough on October 14, 1889, from Henry Lee, H. Hollis Hunnewell, and Augustus Lowell. The land was part of a larger parcel that Henry Lee and his partners purchased on February 20, 1883, from a real estate investment trust formed by Grenville T. W. Braman, Henry D. Hyde, and Frank W. Andrews. The parcel was one several tracts of land the trust had purchased from the Boston Water Power Company on March 1, 1872.

Click here for an index to the deeds for 421-423 Marlborough, and click here for further information on the land west of Massachusetts Avenue between the south side of Beacon and the north side of Commonwealth.

In subdividing their land, Henry Lee and his partners had created two passageways to provide access and drainage to the alley: a four foot wide passageway behind 427-429 Marlborough connecting with a six foot wide passageway behind 31 Massachusetts Avenue extending north to the alley. Unlike similar passageways elsewhere in the Back Bay (for example, at the rear of houses facing on the side streets), these passageways were not created as easements over the lots, but as separate open spaces “appurtenant to the granted premises” to which each property owner had access in common with the owners of the other the abutting properties.

In October of 1889, Edwin Horn filed a petition with the Board of Aldermen for permission to project a bay over the sidewalk on Massachusetts Avenue (West Chester Park)  55 feet high, running from the second to the sixth stories. The permission subsequently was granted and construction probably started soon thereafter.

On April 28, 1890, while it still was under construction, 421 Marlborough was purchased from Edwin Horn by Royal Elisha Robbins, an importer of watches and a principal organizer of the Boston Watch Company (later the American Waltham Watch Company). He and his wife, Mary Elizabeth (Horton) Robbins, lived at 44 Commonwealth.

On June 12, 1890, 423 Marlborough was purchased from Edwin Horn by Elijah Anderson Shaw, a cotton buyer. He was a widower (his wife, Frances Emma (Dyer) Shaw, having died in March of 1890) and lived in Lexington. 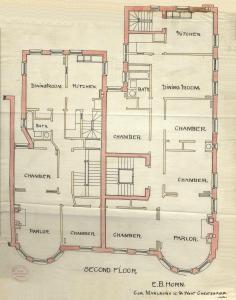 In the deeds to Royal Robbins and Elijah Shaw, Edwin Horn included a four foot easement across the rear (northern boundary) of 421 Marlborough providing access to Massachusetts Avenue for 423 Marlborough.

On October 30, 1890, Elgin Burns, the janitor at 421 Marlborough, was killed in an elevator accident in the building.

Washington B. Thomas was an executive of the Standard Sugar Refinery, owned by his father, Joseph B. Thomas. and later would become president of the American Sugar Refining Company. A major investor in real estate, in 1895, he built The Marlborough at 416 Marlborough, and in 1898-1899, he built the Hotel Cambridge at 483-485 Beacon. He and his wife, Caroline (Wadleigh) Thomas, lived at 20 Gloucester.

On February 10, 1928, the Cape Ann Savings Bank foreclosed on the mortgage it held on 421-423 Marlborough and took possession of the property.

In August of 1941, the Corner Realty Trust applied for (and subsequently received) permission to add two stores in the basement level of 421 Marlborough. The upper floors remained six apartments, one per floor. In November of 1941, the trust amended its plans to modify the design of the stores, so that one store entrance would be from the “court rather than directly off sidewalk.”

The two stores had the addresses of 33 and 35 Massachusetts Avenue. Various businesses leased 33 Marlborough, and Wallace Marden maintained his real estate office at 35 Marlborough until about 1948.

In November of 1941, the trust applied for (and subsequently received) permission to relocate the rear entrance of 423 Marlborough in order to enlarge the existing apartment for the janitor.

On August 31, 1943, Gladys Young transferred 421-423 Marlborough to Wallace Marden as trustee of the Investment Realty Trust.

In January of 1948, the trust applied for (and subsequently received) permission to increase the number of apartments at 421 Marlborough from six to ten by subdividing the units on the first through fourth floors.  By this time, the two stores in the basement were apparently both being used as offices and are referred to as such on the permit application. In July of 1949, the trust amended its application to increase the number of units to twelve by subdividing the units on the fifth and sixth floors as well.

In March of 1950, the trust applied for (and subsequently received) permission to convert the basement area from offices into a “launderette” (laundromat), with an address of 421 Marlborough. “Laun-Dry It” continued to be located there until the mid-1960s.

On October 2, 1964, 421-423 Marlborough were acquired from Louise Robinson by Barnett Nathan Samuels and his sons, Burton Samuels and Martin A Samuels, as trustees under a trust dated January 2, 1964. In June of 1964, they had acquired 31 Massachusetts

By 1966, the basement area had been converted from a laundromat into a restaurant, Ye Beef and Great Steaks. It continued to be located there until about 1970.

In July of 1972, Barnett Samuels applied for (and subsequently received) permission to convert the basement area from a “sandwich shop and ice cream parlor” into a restaurant and bar.

The basement space subsequently became Bully’s Pub in 1972 and 1973, and then the Fathers Five bar from 1974. The space was identified both as 421 Marlborough and 33 Massachusetts Avenue.

In August of 1982, Andrew Saggese filed for (and subsequently received) permission to conform the legal occupancy of 421 Marlborough with the existing use: twelve residential units on the first six floors and a thirteenth on the roof (a former maid’s quarters not previously included in the building’s legal occupancy as a separate dwelling unit), and a restaurant in the basement.

The commercial unit continued to be occupied the Fathers Five bar until the early 1990s, when it became the Back Bay Pub. From 1993 to 2008 it was The Last Drop, and from 2009 it was the Corner Tavern.

Marlborough Street horse car, ca. 1895, with 421 Marlborough in the background; photograph by Nathaniel Livermore Stebbins; courtesy of the Boston Athenaeum

The Marlborough Street horse car line had small cars painted pale blue and pea green, affectionately known by residents as the “blue jays” or the “little blue cars.” The horse cars began at Massachusetts Avenue, with one line running east to Dartmouth and then south on Dartmouth to Boylston, and the other running east to Arlington, then north to Beacon and east on Beacon to Charles Street.

In 1889, the Board of Aldermen granted the West End Railway the right to use electric street cars (“electrics”) wherever they had horse car lines in Boston, including the Marlborough Street line. In 1891, they began to wire Marlborough Street and the residents objected. After a hearing by the Board of Aldermen, the company agreed not to install the electric system without giving notice of their intention. In 1894, the residents expressed concern that wiring work being done on Clarendon and Dartmouth indicated that the company planned to convert the line to electricity, and petitioned the Board to prevent such a change. After hearings, in November of 1894, the Board adopted an order prohibiting the company from converting their lines to electricity on Marlborough and on Clarendon and Dartmouth north of Boylston.

After several more years of controversy, on December 20, 1900, the Railroad Commission authorized discontinuation of the Marlborough Street line and removal of the tracks. According to a December 21, 1900, Boston Globe article, they were the last horse cars in Boston, all others having been replaced by electric street cars by the mid-1890s. William Bancroft, president of the Boston Elevated Railway (successor to the West End Railway) advised the Boston Herald on December 28, 1900, that the horse cars “were taken off Marlboro street the forenoon of the 24th, at 10:45 o’clock.”

On May 11, 1901, the Boston Globe reported that work had begun to remove the horse car tracks from Marlborough, “thus blotting out the last reminder of the jog-a-long trips of the white horses and blue cars of the last of Boston’s horse railroad lines.”