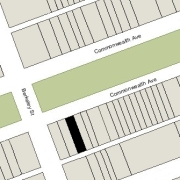 44 Commonwealth was built as the home of Royal Elisha Robbins and his wife Mary Elizabeth (Horton) Robbins.  They previously had lived at the Evans House hotel.

Royal Robbins purchased the land on which 44 Commonwealth was built on April 29, 1863 from Franklin Havens. It was part of a larger parcel originally purchased from the Commonwealth of Massachusetts on May 2, 1860, by shipping merchant and US Congressman Samuel Hooper. He and his wife, Anne (Sturgis) Hooper, lived at 27 Commonwealth.

Click here for an index to the deeds for 44 Commonwealth, and click here for further information about the land between the south side of Commonwealth and Alley 437, from Arlington to Berkeley.

Royal Robbins was an importer of watches and a principal organizer of the Boston Watch Company, which began manufacturing watches in Roxbury in 1853 and later moved to Waltham.  In 1857, he moved to Waltham to oversee and expand the watch manufacturing business.  After the Civil War, the business was reorganized as the American Waltham Watch Company; his firm, Robbins, Appleton & Co., were agents for the company.

Royal Robbins married in November of 1888 to Theresa Huntington.  After their marriage, they lived at 375 Beacon.  Royal Robbins was treasurer of his father’s firm, Robbins, Appleton & Co.

Gertrude Robbins married in September of 1894 to John Caswell of New York. After their marriage, they lived at 501 Beacon for the 1894-1895 winter season. They also maintained a home, Round Plain Farm, in Pride’s Crossing. He was a real estate investor, and would become a noted big game hunter and gun expert.

In about 1895, Royal and Theresa Robbins joined his parents at 44 Commonwealth.  They had lived at 341 Marlborough during the 1894-1895 winter season.

In about 1901, Royal and Theresa Robbins moved to Brookline.

Marjorie Robbins married in January of 1902 to Albert Goodsell Milbank, a lawyer.  After their marriage, they lived in New York City.

After his death, 44 Commonwealth remained the home of Reginald and Phyllis Robbins, and their maternal aunt, Frances Horton.  Mary E. F. Robbins appears to have moved to Lynn. 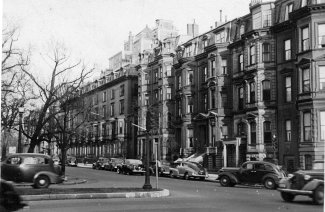 In October of 1905, Royal Elisha Robbins’s home in Pride’s Crossing was purchased from his estate by Frederick Ayer of 395 Commonwealth.

On November 9, 1905, Reginald and Phyllis Robbins purchased 44 Commonwealth from their father’s estate.

Reginald Robbins married in April of 1907 to Jane Hall.  After their marriage, they lived at 44 Commonwealth and maintained a second home in Hamilton, which became their primary residence after about 1910.  He was an executive with Robbins, Appleton & Co.

On August 15, 1910, Phyllis Robbins acquired Reginald Robbins’s interest in 44 Commonwealth. She continued to live there with Frances Horton.

During the 1910-1911 winter season, they were joined at 44 Commonwealth by Phyllis Robbins’s brother-in-law and sister, John and Gertrude (Robbins) Caswell, and their two children, John Caswell Jr., and Elizabeth Robbins Caswell.  They previously had lived at The Empire at 333 Commonwealth and before that at 501 Beacon.  They also continued to maintain Round Plain Farm in Pride’s Crossing.

Gertrude Caswell and their children moved to the Hotel Puritan at 390 Commonwealth for the 1911-1912 winter season and John Caswell moved to New York City, where he was listed in the Social Register as living at the Union Club. In April of 1912, he traveled to London, where he lived temporarily with his maternal aunt, Eliza Gardner (Watson) Watson, the wife of Wesley Watson, at 14 Cadogan Gardens. From about this time, John and Gertrude Caswell appear to have lived apart.

Gertrude Caswell and John Jr. and Elizabeth Caswell moved to 338 Marlborough during the 1912-1913 winter season; by the 1914-1915 season, they were once again living with Phyllis Robbins and Frances Horton at 44 Commonwealth.  They continued to live there during the 1916-1917 season, but moved thereafter back to 338 Marlborough for the next season.  Gertrude Caswell also continued to maintain Round Plain Farm as her country residence.

In October of 1928, the Club applied for (and subsequently received) permission to cut through openings in the party wall between 42 Commonwealth and 44 Commonwealth.

In April of 1974, the College Club applied for (and subsequently received) permission to remodel 44 Commonwealth, including lowering the front entrance to street level, and to confirm the legal occupancy as one apartment and twelve lodging units.

44 Commonwealth remained the College Club in 2020.