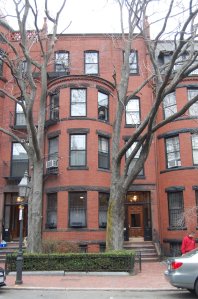 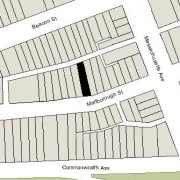 As originally built, the design of 437 Marlborough was the same as 441 Marlborough, with a mansard roof at the fourth floor and the bay topped with a truncated conical roof. This was replaced in 1915.

The land was part of a parcel Henry Whitney had acquired in two transactions, on November 24, 1882, and on March 20, 1885, all part of a tract of land originally purchased from the Boston Water Power Company on June 1, 1880, by a real estate investment trust formed by Francis W. Palfrey, Francis A. Osborn, and Grenville T. W. Braman. 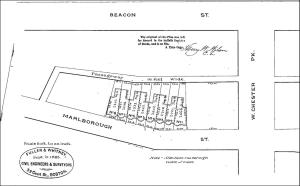 Click here for an index to the deeds for 437 Marlborough, and click here for further information on the land west of Massachusetts Avenue between the south side of Beacon and the north side of Commonwealth.

In July of 1885, when the eight houses were under construction, real estate dealer Alexander H. Porter offered them for sale. His advertisement in the Boston Evening Transcript noted that “they have parlor, dining-room and kitchen on the first floor and are to be finished in hard wood. The prices will vary from $20,000 to $25,000. If purchased now they will be finished to suit, and minor changes in the plans can be made without extra cost.”

On February 24, 1887, 437 Marlborough was purchased from N. Henry Chadwick and Oscar Stillings by Ella Maria (Harding) Newman, the wife of Albert Lee Newman. They previously had lived at 250 West Newton.

Albert Newman was president of the National Bank of the Commonwealth until 1892, when he resigned because of ill health. He died in May of 1894, a suicide. After his death, Ella Newman and their son, Albert Harding Newman, continued to live at 437 Marlborough. By 1896, they had been joined by Ella Newman’s parents, Alpheus Harding and Prudence Maria (Taft) Harding. They previously had lived in Athol, Massachusetts, where he had been a banker. 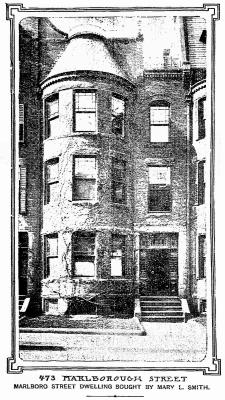 Albert Harding Newman, an investment banker, married in October of 1897 to Jeanie Stevens Smith. After their marriage, they lived in Brookline.

Prudence Maria Harding died in March of 1900. Alpheus Harding and Ella Newman both died in October of 1903.

On April 15, 1904, 437 Marlborough was purchased from Albert H. Newman by Mary Louise (Moulton) Smith, the wife of Dr. Charles Morton Smith. They previously had lived at 60 Chestnut. They also maintained a home in North Scituate.

C. Morton Smith was a physician and dermatologist. He was an expert on syphilis, and was a professor of syphilology at Harvard Medical School. He maintained his office at 437 Marlborough. 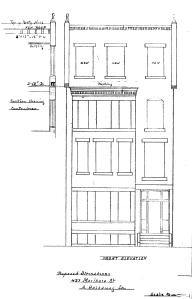 In August of 1915, Mary Smith applied for (and subsequently received) permission to expand the fourth floor by eliminating the mansard and the conical roof on the bay. Plans for the remodeling — prepared by A. Hathaway Co., carpenters — are included in the City of Boston Blueprints Collection in the Boston City Archives (reference BIN C-19).

C. Morton Smith died in January of 1938, and Mary Smith moved soon thereafter to an apartment at 90 Commonwealth.

On September 16, 1939, 437 Marlborough was purchased from Mary Smith by Albert Crittendon Kelley, a civil engineer and surveyor, and his wife. Elsie A. (Johnson) Kelley. They lived at 505 Beacon, where they operated a lodging house. In January of 1940, they filed for (and subsequently received) permission to convert 437 Marlborough into a lodging house.

In September of 1944, Martha Gotreau and Joffre Gotreau purchased 441 Marlborough, and Martha Gotreau made it her home and operated it as a lodging house.

By 1945, Joffre Gotreau had moved from 437 Marlborough to 441 Marlborough, and 437 Marlborough was the home of his brother and sister-in-law, Wilfred R. Gotreau and Germaine (Turcotte) Gotreau. They previously had lived in Canada, and in the early 1940s at 372 Massachusetts Avenue. Wilfred Gotreau was a musician and music teacher. Later that year, they moved to 507 Beacon.

In May of 1954, Martha Gotreau applied for (and subsequently received) permission to construct a platform of steel and concrete at the rear of 437-439 Marlborough to serve as a patio for the two houses. 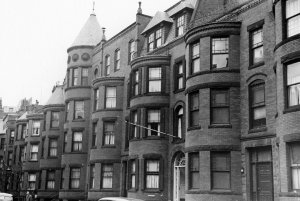 Joffre Gotreau (still living at 261 Marlborough) was listed in the City Directories as the operator of the lodging houses at 437-439-441 Marlborough until the early 1960s.

On June 29, 1967, 437-439-441 Marlborough were purchased from Martha Gotreau and Joffre Gotreau by Milton B. Popkin and Louis Grolnic. They continued to operate them as lodging houses.

On April 3, 1974, 437-439-441 Marlborough were purchased from Milton Popkin and Louis Grolnic by Jerald R. Feldman and Harvey P. Wilk, trustees of the 437, 439, 441 Marlboro Street Realty Trust. They continued to operate them as lodging houses.

On March 2, 1982, 437-439 Marlborough were purchased from Jerald Feldman and Harvey Wilk by Alan D. Humbert, trustee of the Ferrari Realty Trust.

On August 29, 1983, Dorothy Wirth converted the houses into fourteen condominium units, seven units in each house, the 437-439 Marlborough Condominium. 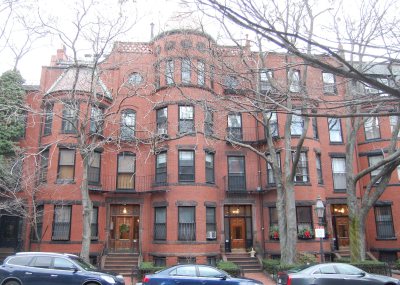