395 Commonwealth was designed by architect Alfred J. Manning and designer Louis Comfort Tiffany, and built in 1899-1900 for Frederick Ayer and his wife Ellen Barrows (Banning) Ayer. He is shown as the owner on the original building permit application, dated December 9, 1899, and on a second application to build a one-story storage building in the rear, dated November 19, 1900.

The rear of the lot on which 395 Commonwealth was built extends north to Marlborough Street and has a secondary street address of 444 Marlborough.

The original building permit application names only Alfred J. Manning as the architect. However, much of the interior was designed by Louis Comfort Tiffany, the noted artist, interior designer, and master of stained glass. He also collaborated with A. J. Manning on the exterior. A December 21, 1901, article in the American Architect and Building News notes: “In carrying out his design the architect had the benefit of association with Mr. Louis C. Tiffany, who designed the exterior mosaic-work, which makes the house so notable on a Boston street, as well as decorated the interesting main staircase…”.

Frederick Ayer purchased the land for 395 Commonwealth on April 15, 1899, acquiring two lots from real estate dealer Frederick O. Woodruff, a 52 foot wide lot to the east and a 26 foot wide lot to the west. When he purchased the land, reports in the Boston Globe and Boston Evening Transcript indicated that he planned to build “one of the finest private dwellings in Boston, his lot having a frontage of 78 feet.”  Subsequently, he built 395 Commonwealth with a 31.97 foot frontage on the eastern portion of the lot and, on January 17, 1901, sold the remaining vacant lot, with a frontage of 46.03 feet, to Alexander Agassiz.

Frederick Woodruff had acquired the two lots on the same day he conveyed them to Frederick Ayer, the 52 foot wide lot from S. Endicott Peabody and the 26 foot wide lot from the estate of William G. Saltonstall.  S. Endicott Peabody and William G. Saltonstall had purchased their lots in January of 1886 from a real estate investment trust formed by Francis W. Palfrey, Francis A. Osborn, and Grenville T. W. Braman, both lots being part of a tract of land the trust had purchased on June 1, 1880, from the Boston Water Power Company.

When the trustees sold the lots to S. Endicott Peabody and William Saltonstall, they included language prohibiting the use of any building on the land as a stable and prohibiting the erection of any building of more than one story in height within thirty feet of Marlborough. When Frederick Ayer sold the vacant lot at 397 Commonwealth to Alexander Agassiz, he included additional language (for Alexander Agassiz’s benefit) specifying that no building in the rear of 395 Commonwealth could be located within 8 feet of the boundary line with 397 Commonwealth.

By the 1900-1901 winter season, Frederick Ayer and Ellen (Banning) Ayer had made 395 Commonwealth their home. They previously had lived at 232 Beacon and in Lowell.

Frederick Ayer began his business career as a manufacturer of patent medicines in partnership with his brother, Dr. James C. Ayer. He subsequently entered the textile manufacturing business in Lowell and Lawrence, and, with his son-in-law, William Madison Wood, founded the American Woolen Company.  William Wood was the husband of Ellen Wheaton (Ayer) Wood, Frederick Ayer’s daughter with his first wife, Cornelia (Wheaton) Ayer, who died in January of 1878.

Frederick Ayer also was a real estate investor and, at about the same time he had 395 Commonwealth built, he commissioned two commercial buildings on Broadway in New York, both designed by A. J. Manning. A March 1900 issue of Carpentry and Building magazine, commenting on recently planned buildings, noted: “An office and loft building 15 stories and basement in height is to be erected for Frederick Ayer of Boston at 524-526 Broadway, the architect, A. J. Manning, estimating the cost at $350,000. Mr. Manning is also architect for a loft building to be put up at 599-601 Broadway for the same owner, at a cost of $500,000.”

Frederick and Ellen Ayer’s three children lived with them: Beatrice Banning Ayer, Frederick Ayer, Jr., and Mary Katharine (Kate) Ayer. Beatrice Ayer married in May of 1910 to George Smith Patton, Jr., a lieutenant in the US Army who would become a noted general in World War II. After their marriage, they moved to Fort Sheridan, Illinois, where he was stationed. Frederick Ayer, Jr., a trustee, married in August of 1914 to Hilda Proctor Rice and moved to Topsfield. Mary Katharine Ayer married in May of 1917 to Keith Merrill, a lawyer in Minneapolis.

In her Reminiscences of Frederick Ayer (privately published in 1923), his daughter, Beatrice (Ayer) Patton commented on Frederick Ayer’s decision to build 395 Commonwealth: “After living several winters in rented houses and hotels in Boston, he built the house at 395 Commonwealth Avenue, commencing it in 1900, and with characteristic thoroughness devoted much time to the planning of all details.  As a result the construction and equipment of the house were practically perfect, though the architectural results were a disappointment to him.”

Frederick Ayer’s disappointment was not shared by others. On June 3, 1906, the Boston Globe’s “Table Gossip” commented that “Mr Ayer’s house on lower Commonwealth av excites attention and admiration because of the beautiful mosaic friezes over the windows. The glass is so set that it gives the effect of splendid jewels inside the house, and is thought by those who have seen it to resemble a similar effect on a small scale of the celebrated Taj Mahal in India.”

Beatrice Patton’s Reminiscences also noted that “at the same time the family began to look for a summer place near town. We found the ‘Farm’ in Newton, and my father built a new house and greenhouses on it and gave the place to my mother.”

In 1905, Frederick Ayers purchased Plum Cove in Pride’s Crossing from the estate of Royal Elisha Robbins of 44 Commonwealth, who had died in July of 1902.  He replaced it with a new house, Avalon, designed by Parker, Thomas, and Rice.

Frederick Ayer died in March of 1918 and Ellen Ayer died the next month, in April of 1918. 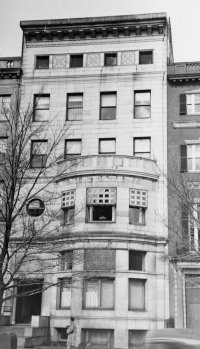 On September 15, 1923, 395 Commonwealth was acquired from Frederick Ayer’s estate by Ethel Josephine (Hixon) Abbott, the wife of Charles Edward Abbott. He was president of the E. A. Abbott Company (founded by his father, Edward A. Abbott), office building contractors, which subsequently converted 395 Commonwealth into offices.

On January 23, 1925, 395 Commonwealth was acquired from Ethel Abbott by the Professional Building Company. The company had been formed by Charles Abbott to purchase the Hotel Tuileries at 270 Commonwealth in August of 1921, which it subsequently converted into medical offices and continued to own.

On August 22, 1930, 395 Commonwealth was acquired from the Professional Building Company (Huntington P. Faxon, president, and Charles W. Greenough, treasurer) by real estate dealer James M, Burr; it was acquired from him on November 6, 1930, by John Matheson.

It continued to be medical offices.

On February 4, 1939, Brookline Savings Bank foreclosed on a mortgage it held on 395 Commonwealth and took possession of the property.

On December 30, 1943, 395 Commonwealth was acquired from the bank by Francis J. Quinn of Cambridge.

The property subsequently changed hands and on May 3, 1946, was acquired by Max J. Rothbard, a shoe manufacturer. He and his wife, Ida (Poitras) Rothbard, lived in Swampscott.

Max Rothbard died in November of 1947.

It remained a medical office building.

On January 9, 1953, 395 Commonwealth was acquired from Massachusetts Properties by the Hearthstone Insurance Company of Massachusetts, which moved its offices there from 120 Boylston. For several years, it also continued to lease offices to doctors, dentists, and others.

In January of 1958, Hearthstone Insurance acquired 397 Commonwealth from the Boston Evening Clinic. Thereafter, it operated the two properties as a single building, the Hearthstone Building. In addition to maintaining its offices there, it leased space to other businesses, among them the Frick Company, dealers in refrigerators, and the Paul L. Beane Company, food brokers.

Drawing of 395 Commonwealth; 1956 Christmas card from the Hearthstone Insurance Company, from the collections of Helen and Dante “Joe” Balboni

On December 28, 1964, 395-397 Commonwealth were acquired from Hearthstone Insurance by the Association for Cultural Interchange, Inc.

An affiliate of the Roman Catholic Opus Dei organization, the Association for Cultural Interchange opened a dormitory and cultural center for women students, Bayridge Residence, at 395-397 Commonwealth.

In September of 1966, 395 Commonwealth was added to the State Register for Historic Places.

In August of 1974, the Association for Cultural Interchange, Inc., changed its name to The Trimount Foundation, Inc. It continued to operate the Bayridge Residence and Cultural Center at 395 Commonwealth.

In June of 1988, it applied for (and subsequently received) permission to build a 300 s.f. addition at the rear of the property allowing the extension of the existing chapel at 395 Commonwealth.

In April of 2005, 395 Commonwealth was designated a National Historic Landmark in recognition of its standing as one of only three surviving examples of residential interiors designed by Louis Comfort Tiffany, and the sole example of an interior designed by him at the time the building was built, rather than as part of a remodeling.

On June 26, 2013, The Trimount Foundation entered into a Preservation Restriction Agreement for 395 Commonwealth with the Massachusetts Historical Commission, designed to preserve “those characteristics which contribute to the architectural, archaeological and historical integrity of the Premises which have been listed in the National and/or State Registers of Historic Places… which include, but are not limited to, the artifacts, features, materials, appearance, and workmanship of the Premises…”.

On December 6, 2021, 395-397 Commonwealth were acquired from The Trimount Foundation by 395-399 Commonwealth Avenue LLC (Jean Abouhamad of Sea-Dar Enterprises, manager of record). 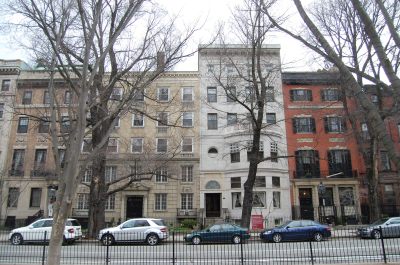