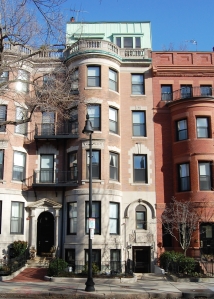 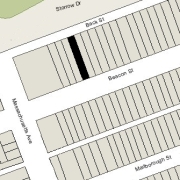 482 Beacon is located on the north side of Beacon, between Hereford and Massachusetts Avenue, with 480 Beacon to the east and 484 Beacon to the west.

Click here for an index to the deeds for 482 Beacon, and click here for further information on the land on the north side of Beacon, including the Storrow Memorial Embankment on the Esplanade. 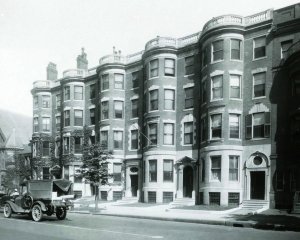 Henry M. Whitney was president of the Metropolitan Steamship Company and the founder or organizer of several coal mining, steel, and illuminating gas companies. In 1886, he had organized the West End Land Company, which developed large portions of Brookline along Beacon Street, and the West End Street Railway Company, which later pioneered the electric trolley system in Boston. He and his wife, Margaret Foster (Green) Whitney, lived in Brookline.

On October 25, 1893, 482 Beacon was acquired from Henry Whitney by Alonzo Gifford Van Nostrand. He and his wife, Sarah (Sadie) Gertrude (Foque) Van Nostrand, made it their home. They previously had lived at 286 Newbury.

Alonzo Van Nostrand was a brewer, proprietor of the Bunker Hill Brewery in Charlestown.

In October of 1904, he applied for (and subsequently received) permission to construct a garage at the rear of the property. Plans for the garage, designed by New York architect Leon N. Gillette, are included in the City of Boston Blueprints Collection in the Boston City Archives (reference BIN A-98).

Sarah Van Nostrand died in April of 1905.  Alonzo Van Nostrand remarried in August of 1907 to Mrs. Jane (Jennie/Jeannie) Bradford (Eldridge) Taylor, the former wife of George F. Taylor.  After their marriage, they lived at 482 Beacon, and on February 7, 1911, he transferred the property into her name.

The Van Nostrands continued to live at 482 Beacon during the 1919-1920 winter season, but moved thereafter to New Bedford.

On July 28, 1922, 482 Beacon was acquired from Jane Van Nostrand by Miss Bertha A. Conlan. She lived in Cambridge with her brother, Patrick H. Conlan, a real estate dealer.

Among Annie Varney’s lodgers in 1923 were John L. Dion and his wife, Emma (Chevalier) Dion.  They previously had lived in Norwood.  He was a janitor and may have managed 482 Beacon for Mrs. Varney.  By the 1923-1924 winter season, they had moved to 228 Commonwealth.

On September 14, 1923, the American Trust Company foreclosed on a mortgage it held on 482 Beacon and sold the property to William J. Capron. A retired coal dealer from Oneida, New York, he and his wife, Mary H. (Haigh) Capron, lived at 259 Newbury.

On March 31, 1924, 482 Beacon was acquired from William Capron by Eunice E. (Mann) Schneider, the wife of Louis H. Schneider, a clergyman. They previously had lived in Brookline. On the same day, Eunice Schneider transferred the property to her husband and Luther W. Bixby as trustees for the benefit of The Church Invisible.

In March of 1924, Louis Schneider applied for (and subsequently received) permission to convert the property from a single-family dwelling into a church and community house.  Thereafter, it became the location of The House of Faith and The Church Invisible, of which he served as minister.  He also was editor of The Spoken Word.

The Schneiders continued to live at 482 Beacon, and to operate The House of Faith and The Church Invisible there, during the 1927-1928 winter season, but moved thereafter to Melrose.

On April 26, 1928, the American Trust Company foreclosed on a mortgage it held on 482 Beacon, and it was acquired by Dr. Joseph Stanton, a surgeon and later chief of staff at St. Elizabeth’s Hospital in Brighton. He and his wife, Mary Elizabeth (Sullivan) Stanton, lived in Newton, and he maintained his office at 520 Beacon.

Dr. Stanton converted the property into medical offices, including lowering the front entrance and adding a fifth story.  Plans for the remodeling, designed by architect Edward T. P. Graham, are included in the City of Boston Blueprints Collection in the Boston City Archives (reference BIN O-24).  After the remodeling was completed, Dr. Stanton moved his office to 482 Beacon and leased space to other doctors and dentists.

On May 29, 1959, 482 Beacon was acquired from Richard Stanton and Joseph R. Stanton by William J. Bannan, Jr., and Richard W. Sheehy, Jr., trustees of the Sheban Realty Trust. 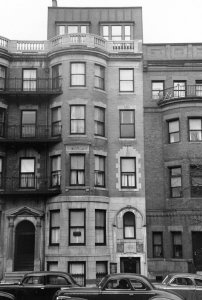 In September of 1962, Byron Angel applied for (and subsequently received) permission to convert the property from medical offices into twelve apartments.

The property continued to be held by Michael J. Smith in various partnerships, corporations, and trusts.

On March 22, 1968, 482 Beacon was acquired from Michael J. Smith, as trustee of the Weatherfield Associates Trust, by Hubert W. Adams of Wakefield.

The property changed hands and on December 23, 1971, was acquired by real estate dealer Harold Brown, trustee of the 482 Beacon Street Trust.