492 Beacon was designed by Walker and Kimball, architects, and built in 1891-1892 as the Mount Vernon Congregational Church.

The Mount Vernon Congregation Church was founded in 1842 and originally was located in Ashburton Place on Beacon Hill. As its members moved to the Back Bay, the congregation decided to build a new church in the western portion of the neighborhood.

The land for the Mount Vernon Church was purchased on November 20, 1890, from the Boston and Roxbury Mill Corporation by Henry Woods, a member of the congregation’s building committee.

The deeds from the Boston and Roxbury Mill Corporation included language specifying that only dwellings and associated outbuildings (including stables) could be built on the land and limiting to one story any building in the rear north of a line 90 feet from Beacon. The owners of land could bring legal action to enforce these restrictions if they were violated by the owner of a neighboring property. To permit the construction of the Mount Vernon Church, on June 20, 1890, the Boston and Roxbury Mill Corporation entered into agreements with the owners of the abutting land under which they waived their right to object to construction of a church or chapel on land between West Chester Park (Massachusetts Avenue) and a line 200 feet to the east, without any limitation on the dimensions of any such building. The November 20, 1890, deed with Henry Woods included language expressly permitting the construction of a church or chapel. He purchased lot at the corner of Massachusetts Avenue and Beacon, with a 100 foot frontage on Beacon, and in May of 1892, the Boston and Roxbury Mill Corporation sold the land to the east to Eugene Fay, who had five houses built on it at 482-490 Beacon. 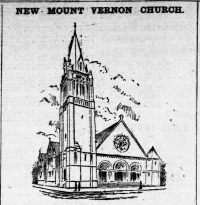 Drawing of the Beacon Street façade of the Mount Vernon Congregational Church, June 1892

Click here for an index to the deeds for 490-492 Beacon, and click here for further information on the land on the north side of Beacon, including the Storrow Memorial Embankment on the Esplanade.

On July 21, 1891, the Boston Globe reported that Charles Howard Walker, of Walker and Kimball, had completed the plans for the building. The corner-stone for the building was laid on November 5, 1891.

On April 1, 1892, Henry Woods transferred the property to The Mount Vernon Congregational Society.

The church was completed in the fall of 1892, and the first services were conducted on November 13, 1892.

The principal façade was on Beacon, where there was a triple arched entrance under a large gable with a rose window. At the corner of Beacon and Massachusetts Avenue there was an 85 foot high square tower topped with a 45 foot high octagonal spire. The walls were of Roxbury stone with Amherst stone trimmings.

Click here for a complete description of the building’s exterior and interior, prepared by Walker and Kimball and quoted in the Boston Globe’s November 5, 1891, article on the laying of the corner-stone.

Over the subsequent years, stained glass windows by John LaFarge and Louis Comfort Tiffany were added as memorials to several members of the congregation. 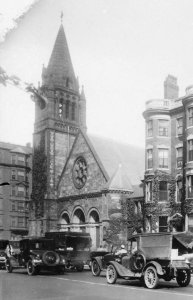 490 Beacon became Herrick House, named in honor of Rev. Samuel Edward Herrick, who served as pastor of the church from 1874 until his death in December of 1904. 490 Beacon served as the church parish house and also as lodgings for male students at various local colleges and universities.

As originally designed, the church had a 45 foot high steeple on top of its square tower. The steeple appears in William T. Clark’s photograph from the mid-1920s, but shows as having been removed in Bainbridge Bunting’s photograph from the early 1940s. According to an October 2, 1977, Boston Globe article by Anthony J. Yudis, the “45-foot spire was removed in 1938 just before the hurricane struck Boston.”

Following World War II, many of the congregants moved from the Back Bay. In 1970, the congregation voted to affiliate with and hold its services at Old South Church in Copley Square and the Mount Vernon Church was vacated. The congregation retained its separate identity and Rev. Herbert B. Morrell, its pastor, continued to live at 390 Beacon until the mid-1970s.

The Mount Vernon congregation continued to own the church building and parish house and over the next eight years considered various proposals for its use.

On March 4, 1973, Anthony Yudis of the Boston Globe reported that “the community and public agencies are mulling over the possibility of a high rise elderly housing development there.” The proposal appears to have been abandoned.

In 1977, MTV Associates, with architect John A. Sharratt as general partner and his wife, Katherine Ramsey Ludlow, as limited partner, proposed to convert the parish house at 490 Beacon into six residential units and to remodel the church building into retail and office space. The proposal was approved by the Boston Redevelopment Authority in January of 1978, which authorized favorable tax treatment for the project.

On July 20, 1978, the church building was destroyed by a major fire. The parish house at 490 Beacon was not damaged in the fire, but subsequently was vandalized.

The proposal by MTV Associates appears to have been abandoned following the fire.

On June 27, 1979, architect Graham Gund purchased the church building and the parish house at 490 Beacon from the Mount Vernon Church.

In January of 1981, he applied for (and subsequently received) permission to combine 490-492 Beacon into one property with fifty residential units contained in a combination of the renovated original buildings and new structures.

On March 5, 1981, Graham Gund transferred 490-492 Beacon to Peter E. Madsen, trustee of the 490-492 Beacon Street Trust. In March of 1982, it filed a new application to consolidate the properties and convert them into forty-three residential units.

On January 31, 1984, Peter Madsen transferred the property to School-House Condominiums, Inc., of which Graham Gund was president and Peter Madsen was vice president.

The property was described in the Condominium Master Deed as being composed of two L-shaped structures around a central garden courtyard.  One L-shaped structure consisting of the original church tower, containing a single unit of six floors plus an observatory, and two of the original church walls, each of which contained a single three-bedroom townhouse unit of three floors.  The second L-shaped structure, which included 490 Beacon, contained the elevator.  490 Beacon consisted of seven floors and contained six floor-through units on floors one and three through seven.  The remaining portion of the structure consisted of seven floors and contained 34 units.

On April 5, 1893, 490 Beacon was purchased from Eugene Fay by Henry Melville Whitney. He purchased 482 Beacon and 486 Beacon on the same day. Henry Whitney and his wife, Margaret Foster (Green) Whitney, lived in Brookline. He was a coal and iron manufacturer and president of the Metropolitan Steamship Company and the West End Street Railway Company.

On August 28, 1894, 490 Beacon was purchased from Henry Whitney by Walter Raymond. He and his wife, Hattie (Lewis) Raymond, made it their home. They previously had lived in Cambridge.

Walter Raymond was a travel agent (excursion contractor).  In 1886, he built the Raymond Hotel in South Pasadena, California, the first major resort hotel in the San Gabriel Valley.  In burned to the ground in 1895, and a new hotel was built in 1901.

The Raymonds were living elsewhere during the 1896-1897 winter season, and 490 Beacon was the home of George Oliver Wales, a widower, and the Misses Wales, presumably his daughters Mary Helen Wales and Louise Frances Wales.  George Oliver Wales was an iron merchant whose principal residence was in Braintree.  He remarried in December of 1896 to Lucy Cary Morse and they lived at 490 Beacon for the remainder of the season and then made Braintree their home.

By the 1897-1898 winter season, the Raymonds had resumed living at 490 Beacon. They continued to live there in 1900, but moved soon thereafter, probably to live permanently at the Raymond Hotel in Pasadena. He continued to own 490 Beacon and lease it to others.

During the 1900-1901 winter season, 490 Beacon was the Boston home banker David J. Lord and his wife, Martha Ellen (Chase) Lord.  They also maintained a home in Lynn.  They had moved to 236 Commonwealth by the next season.

By the 1901-1902 winter season, 490 Beacon was the home of Mary W. (Caffrey) Clapp, the widow of metals dealer Eugene H. Clapp.  In 1900, she had lived at the Hotel Somerset.  Her step-children, Eugene and Sarah Clapp, and her daughter, Mary A. Clapp, lived with her.

They continued to live at 490 Beacon during the 1908-1909 winter season, but moved thereafter back to the Hotel Somerset.

On March 2, 1909, 490 Beacon was purchased from Walter Raymond by shoe manufacturer Joseph N. Smith. He and his wife, Sarah (Fuller) Smith, made it their home. They previously had lived in Lynn.

Joseph Smith died in December of 1912.  Sarah Smith continued to live at 490 Beacon during the 1917-1918 winter season, but moved thereafter.

In January of 1918, the estate of Joseph N. Smith applied for (and subsequently received) permission to repair damage from a fire in the furnace room which occurred on January 27, 1918.

By the 1919-1920 winter season, it was the home of Josiah Robinson Harding, a retired cotton manufacturer, and his wife, Jessie Campbell (Ware) Harding. They continued to live there during the 1920-1921 season, but moved thereafter.

On September 25, 1922, 490 Beacon was acquired from William J. Stober by Helen Margaret (Woods) Craig, the widow of David Rankin Craig, who acquired the property on behalf of the Mount Vernon Church. She and her late husband were congregants of the church and her father, Henry Woods, had been the member of the church’s building committee who purchased the land on behalf of church in November of 1890.

On June 6, 1923, she transferred 490 Beacon to the church (her deed acquiring the property from William Stober and the church’s deed acquiring it from her were both recorded on June 7, 1923).

490 Beacon became Herrick House, named in honor of Rev. Samuel Edward Herrick, pastor of Mount Vernon Church from 1874 until his death in December of 1904.  490 Beacon served as the the church parish house and also as lodgings for male students at various local colleges and universities.