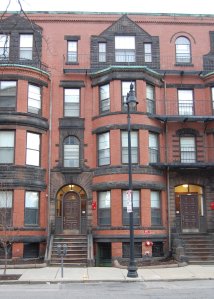 519 Beacon is located on the south side of Beacon, between Massachusetts Avenue and Charlesgate East, with 517 Beacon to the east and 521 Beacon to the west.

519 Beacon is one of ten contiguous houses (511-529 Beacon) designed by architect Samuel D. Kelley and built in 1887 for Chadwick & Stillings (N. Henry Chadwick and Oscar L. Stillings), a hat block and flange company that became a significant house building firm in the 1880s and 1890s. They are shown as the owners and builders on the original permit applications, all dated March 14, 1887. The next year, Chadwick & Stillings built one more house, also designed by Samuel Kelley, at 531 Beacon.

Click here for an index to the deeds for 519 Beacon, and click here for further information on the land west of Massachusetts Avenue between the south side of Beacon and the north side of Commonwealth.

On December 8, 1888, 519 Beacon was purchased from N. Henry Chadwick and Oscar Stillings by Lydia Ann (Beals) Dennison, the widow of Eliphalet Whorf Dennison. He was the founder of the Dennison Manufacturing Company, makers of paper boxes, tags, and stationers’ supplies. He had died in September of 1886, and she subsequently had lived in Newton with their son and daughter-in-law, Charles Sumner Dennison and Mary Rosabel (French) Dennison.

Lydia Dennison’s unmarried daughter, Alice Louise Dennison, lived with her at 519 Beacon. Also living with her were her son-in-law and daughter, William H. Lucas and Julia (Dennison) Lucas. He was a merchant tailor. They previously had lived at 10 Durham.

The Lucases continued to live at 519 Beacon during the 1892-1893 winter season, but moved thereafter to the Hotel Vendôme.

In April of 1893, Alice Louise Dennison married Rev. William H. Lyon, pastor of All Saints’ Church in Roxbury. After their marriage, they lived at 519 Beacon with her mother.

Mrs. Dennison and the Lyons continued lived there during the 1895-1896 winter season, but all moved thereafter to Brookline, where William Lyon had become pastor of the First Parish Unitarian Church.

They continued to live at 519 Beacon during the 1904-1905 winter season, but moved thereafter to The Charlesgate at 535 Beacon.

On October 2, 1905, 519 Beacon was purchased from Annie Spalding by Miss Mary Burrage Cummings and her sister Miss Ella Pingree Cummings. They previously had lived at 501 Columbus.

Mary Cummings died in March of 1936. Ella Cummings moved soon thereafter and died in June of 1937 in Belmont.

On November 27, 1936, 519 Beacon was purchased from Mary Cummings’s estate and Ella Cummings’s guardian by Ruth (Svenson) Johnson, the widow of John T. Johnson. She previously lived at 517 Beacon with her sister, Signe (Svenson) Woods.

In December of 1936, she filed for (and subsequently received) permission to convert 519 Beacon from a single family dwelling into a lodging house.

Ruth Johnson continued to live at 519 Beacon and operate it as a lodging house until 1947. By 1948, she had moved back to 517 Beacon to live with her sister.

On October 16, 1947, 519 Beacon was purchased by Mrs. Izetta May (Butler) Small, the former wife of Earle Augustus Small, who operated it as a lodging house. She previously had lived in Falmouth.

In April of 1948, she purchased 517 Beacon, and in May of 1948 she transferred it to Grace Hoskins, who operated it as a lodging house.

In December of 1948, Izetta Small applied for (and subsequently received) permission to cut a connecting door between the two houses, presumably so that they could be operated jointly. She died in March of 1949 and named Grace Hoskins as the executor of her will.

On June 2, 1949, 519 Beacon was acquired from Izetta Small’s estate by Albert L. Hollingdale and his wife, Margaret E. (Tabor) Hollingdale. They had acquired 517 Beacon in January of 1949 from Grace Hoskins. They operated lodging houses at both addresses.

On September 1, 1960, 503 Beacon, 517-519 Beacon, and 425-427 Marlborough were acquired from the Hollingdales by real estate dealer Hugh Richardson Farrington and his wife, Clara Marcellina (Cormier) Farrington, as trustees of the Hugh J. Trust. In November of 1961, they acquired 521 Beacon.

The Farringtons operated 425-427 Marlborough and 517-519-521 Beacon as dormitories for Boston University students.

Boston University continued to operate 517-519-521 Beacon as dormitories for BU students. The legal use of the buildings remained as lodging houses, however, and in October of 1980 the University filed for (and subsequently received) permission to legalize the occupancy of 519 Beacon and 521 Beacon as dormitories, reflecting their current use. In June of 1980, they had filed for (and subsequently received) a similar change in use for 517 Beacon.