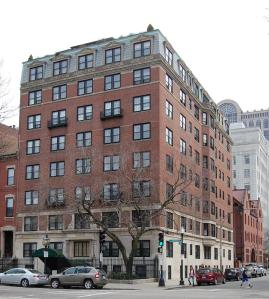 90 Commonwealth was designed by Edward B. Stratton and George Nelson Jacobs, architects, and built in 1925 as a nine-story, 24-unit apartment house by building contractor Frederick J. Van Etten, who also was the owner.

Click here for an index to the deeds for 90 Commonwealth.

On October 15, 1923, Michael Seretto transferred the two properties to Ninety Commonwealth Avenue, Inc., of which he was the president. The same day, the company arranged for financing the new building through bonds to be issued by S. W. Straus & Co. of New York and a mortgage to the First Peoples Trust.  On January 18, 1924, Michael Seretto filed a permit application for the building, indicating that it would be designed by architect Charles R. Greco. The permit subsequently was approved by the Board of Appeal on March 5, 1924.

Michael Seretto died in April of 1924. On July 23, 1924, Herbert S. Riley foreclosed on the mortgage from First Peoples Trust, which it had assigned to him, and transferred the property to George F. Garrity, Jr. On April 11, 1925, George Garrity transferred the property to real estate dealer and conveyancer William J. Stober, who entered into a new mortgage with First Peoples Trust and conveyed the property (with the mortgage) to Norma F. (Allen) Van Etten, the wife of building contractor Frederick J. Van Etten.

In July of 1925, the F. J. Van Etten Company filed for (and subsequently received) permission to construct the building, with Edward Stratton and George Nelson Jacobs, as the architects.  Plans for the building — including elevations, floor plans, framing plans, and foundation plans — are included in the City of Boston Blueprints Collection in the Boston City Archives (reference BIN N-9).

On August 22, 1974, they converted the building into 25 condominium units, the 90 Comm. Condominium. 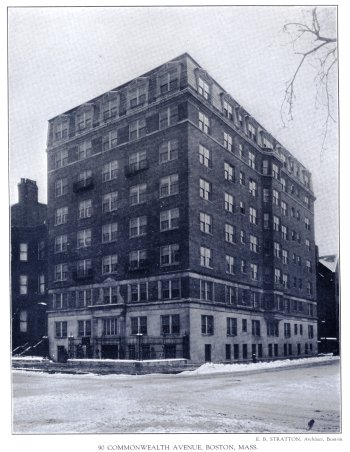 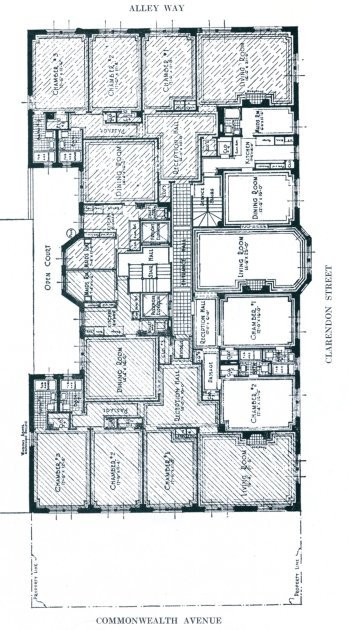 88 Commonwealth was designed by architects Peabody and Stearns and built in 1881-1882 by Norcross Brothers, builders, as the home of Emma Frances (Pierce) Keyes, the widow of merchant and railroad investor Henry Keyes.

Plans for house are included in the Peabody and Stearns Collection in the Boston Public Library’s Arts Department (reference PS/MA.089). The plans refer to a September 10, 1881, contract, with the firms and individuals who built the house.

Click here to view the original plans for 88 Commonwealth (Demolished).

Emma Keyes purchased the land for 88 Commonwealth on March 21, 1881, from Edwin Tufts. He had purchased it on November 4, 1879, from future US Senator Henry Cabot Lodge, who had also owned the lot to the west, where 90 Commonwealth would be built. Both lots were originally purchased on July 6, 1865, from the Commonwealth of Massachusetts by William Sumner Appleton.

George Keyes graduated from Harvard in 1889. He moved to East Pepperell, Massachusetts and became a paper manufacturer.

Martha Keyes married in November of 1892 to Ezra Howes Baker, After their marriage, they lived at 294 Marlborough.

Charles Keyes graduated from Harvard in 1893, after which he moved to East Pepperell and joined his brother’s paper manufacturing business.

Martha  (Keyes) Baker died in June of 1896, and Ezra Henry Baker and their infant daughter, Gertrude Baker, moved soon thereafter to 88 Commonwealth to live with Emma Keyes and Isabella Keyes.

Ezra Henry Baker was an investment banker. He was the first chairman of the Boston Licensing Board, serving from 1906 to 1912, and later was treasurer of Radcliffe College.

On March 13, 1923, 88 Commonwealth was purchased from they Keyes family by building contractor Michael Seretto. In October of 1923, the Swift-McNutt Company received permission to demolish the house.

86-88 Commonwealth and the eastern portion of 90 Commonwealth (ca. 1890); courtesy of the Print Department, Boston Public Library 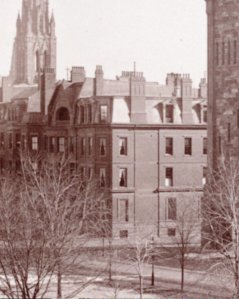 Nathaniel Walker purchased the land for 90 Commonwealth on April 28, 1879. from future US Senator Henry Cabot Lodge, who also owned the lot to the east, where 88 Commonwealth would be built. Both lots were originally purchased on July 6, 1865, from the Commonwealth of Massachusetts by William Sumner Appleton.

On July 19, 1879, the Boston Herald reported that Webster & Dixon had been issued a permit to build the house. Construction probably started soon thereafter.

By the 1880-1881 winter season, Nathaniel Walker and his wife, Susan White Seaver (Grant) Walker, had made it their home. Their son, Grant Walker, lived with them. He was an investor and director in various textile mills and related businesses. They previously had lived at 87 Pinckney.

Nathaniel Walker died in December of 1885. Susan Walker continued to live at 90 Commonwealth. Grant Walker lived with her until his marriage in June of 1888 to Mabel Shaw. After their marriage, they moved to 386 Beacon.

On August 11, 1903, 90 Commonwealth was purchased from the Nathaniel Walker estate by retail clothing merchant and banker Abraham Shuman.  He and his wife, Hettie (Lang) Shuman, made it their home.  They previously had lived at 60 Vernon in Roxbury.  They also maintained a home in Beverly.

By the 1904-1905 winter season, Abraham Shuman had been joined at 90 Commonwealth by his son-in-law and daughter, Carl Dreyfus and Lillian (Shuman) Dreyfus.  Carl Dreyfus was a shirt and clothing manufacturer.

Lillian Dreyfus died in February of 1913, and Carl Dreyfus moved soon thereafter to 48 Beacon.  At about the same time, Abraham Shuman’s daughter, Emma Weil, came to live with him.  She was the widow of August Weil, a shirtwaist manufacturer in New York City.

Abraham Shuman and Emma Weil continued to live at 90 Commonwealth until his death in June of 1918.

George Swift and his wife, Lucile Darst (Casey) Swift, lived at 148 Commonwealth and appear to have left 90 Commonwealth unoccupied after they acquired it.

On August 5, 1920, George Swift transferred 90 Commonwealth into his wife’s name.

On August 6, 1923, 90 Commonwealth was purchased from Lucile Swift by building contractor Michael Seretto. In October of 1923, the Swift-McNutt Company received permission to demolish the house.