In 1852, the Massachusetts legislature (Chapter 79, Resolves of 1852) established the Commissioners on Boston Harbor and the Back Bay “to determine and settle, by agreement, arbitration or process of law,” the disputed claims to the tidal lands of the Back Bay and to “devise or adopt a plan for changing the use of the said lands and flats, or any part thereof, from mill purposes to land purposes, and for filling up and improving the same, for building lots.”

On June 9, 1854, the Commonwealth entered into an indenture with the Boston and Roxbury Mill Corporation, owners of the Mill Dam and Cross Dam, under which the corporation received the tidal lands two hundred feet north of the Mill Dam (now the land on the north side of Beacon Street). The corporation already had built a sea wall about 200 feet north of the dam, west to a point at about what is today Clarendon Street, and had filled the land between the dam and the sea wall. Under the agreement, the corporation agreed to extend the sea wall to what is now Kenmore Square, to fill the land, to release its claims to land south of the Mill Dam, and to forego its right to collect tolls on the Mill Dam Road (now Beacon Street) after May 1, 1863.

Also on June 9, 1854, the Commonwealth entered into an indenture with the Boston Water Power Company (a subsidiary of the Boston and Roxbury Mill Corporation), which operated the Mill Dam and Cross Dam. Under the agreement, the company received the tidal lands bounded on the north by the Mill Dam (including the south side of Beacon Street), on the west by the Cross Dam (which connected with the Mill Dam at a point about 210 feet of what is today Hereford Street and ran southwest at approximately a 45 degree angle), on the east by the Commonwealth’s lands by a line about 95 feet east of what is now Fairfield Street, and on the south by a line running west down the middle of what is now Commonwealth Avenue by land owned by the David Sears family to a point about 135 feet west of Hereford and then running southwest at approximately a 45 degree angle by a line parallel with and about 533 feet east of the Cross Dam. It also received additional land south of what is today Providence Street and east of Exeter Street. In exchange, the company released its right to flow water over the flats (thereby making it possible for the land to the filled) and agreed to fill its land and construct streets and sewers in accordance with a schedule and plan developed by the Commonwealth.

The company’s land was intersected by Parker Street, a 60 foot wide street located on top of the Cross Dam. It connected with Beacon Street between Hereford and Massachusetts Avenue (about at the middle of where 451 Beacon later would be built), and ran southwest at approximately a 45 degree angle, intersecting Marlborough, Commonwealth, Newbury, and Boylston, and then continuing to Centre Street. Various manufacturing and industrial businesses had been located on the street to utilize the tidal power provided by the dam before its operation had been terminated. As part of its agreements regarding the Back Bay lands, the Commonwealth received ownership of the Parker Street roadway; the Boston Water Power Company owned the land on either side and below the roadway.

The map below illustrates the lands owned by the Commonwealth, the Boston and Roxbury Mill Corporation, the Boston Water Power Company, and the David Sears family, drawn on the block plan for the residential portion of the neighborhood in 2015.

Original owners of Back Bay, shown on 2015 block map

During the latter half of the 1850s and 1860s the Commonwealth entered into a series of additional agreements with the Boston and Roxbury Mill Corporation, Boston Water Power Company, and City of Boston to resolve various significant issues, including claims by the City of Boston for land, the extent of the City of Roxbury’s jurisdiction over the land, the logistics and responsibilities associated with filling the land and providing sewers to serve the new houses, and the overall street plan for the neighborhood.

Click here for further information on these issues as part of an overview of the development of the Back Bay.

The Boston Water Power Company sold all its land in large parcels to real estate investors and land developers who then subdivided the land and resold it.

Much of the company’s land was acquired by real estate investment trusts of which Grenville Temple Winthrop Braman was a trustee and probably the organizer.

Grenville T. W. Braman was the son of Jarvis Braman and Lucy C. (Richardson) Braman. His father had operated a bath house at the foot of Chestnut Street on Beacon Hill, credited in an August 24, 1890, Boston Globe article as being the first public bath house in Boston.

Grenville Braman was a real estate investor and served as treasurer of the Boston Water Power Company until mid-1869. In the 1860s, he and his wife, Susie A. (Davies) Braman, lived at 94 Charles and later at 9 Brimmer.

Grenville Braman’s brother, Jarvis Dwight Braman, operated the bath house and a swimming school after his father’s death. He served as assistant paymaster for the Commonwealth in the mid-1860s, and also engaged in real estate with his brother. In mid- to late-1878, he became president of the Boston Water Power Company, remaining in that position until his death in October of 1888. In the 1860s, he and his wife, Amelia Coverley (Finnegan) Braman, lived at 121 Charles and later at 38 Charles.

Grenville Braman’s father-in-law, Daniel Davies, was a housewright and master carpenter, and also was associated with Grenville Braman’s real estate projects. In the 1860s, he and his wife, Amity Bacon (Hastings) Davies, lived at 68 Charles and later at 91 Charles. 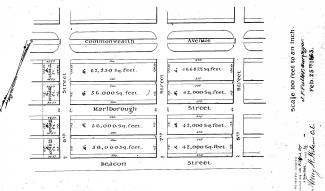 On February 16, 1863, the company sold all of its land from the boundary with the Commonwealth to Fairfield on the south side of Beacon, north and south side of Marlborough, and north side of Commonwealth, to Grenville T. W. Braman, Jarvis D. Braman, and Daniel Davies. The land is shown as parcels A, B, C, and D on a plan by J. F. Fuller dated February 25, 1863.

On February 20, 1863, the company sold the two parcels between Gloucester and Hereford on the south side of Beacon and the north side of Marlborough to Robert Marion Pratt. They are shown as parcels I and J on the plan by J. F. Fuller.

Robert M. Pratt was a banker and broker. He was unmarried and lived at 13 Louisburg Square with his parents, George Williams Pratt (one of the founders of the Boston Stock Exchange) and Mary Barrow (White) Pratt. The Pratts also maintained a home, Oakley, on Belmont Avenue in Watertown (it became the Oakley Country Club in 1898).

On April 15, 1863, the company entered into an agreement to sell all of its land between Fairfield and Gloucester on the south side of Beacon, north and south sides of Marlborough, and north side of Commonwealth to a real estate investment trust formed by John Templeman Coolidge, Franklin Evans, and Charles Henry Parker. The company subdivided the parcels into eighty lots (twenty per block) and issued individual deed bonds to the trustees securing their right to purchase each lot.  On January 29, 1866, the trustees paid for and took title to all of the land.  It is shown as parcels E, F, G, and H on the plan by J. F. Fuller.

Land Sales: 1870-1878. In 1870, the Boston Water Power Company sold two parcels of its land on the south side of Commonwealth and north side of Newbury to David Nelson Skillings as trustee for a trust composed of himself, Lawrence Barnes (of Burlington VT), Charles Whitney (of Lowell), and David Whitney, Jr. (of Detroit). All four were lumber dealers. David Skillings and his wife, Mary (Maguire) Skillings, lived in Winchester.

The boundaries of both parcels ran southwest at approximately a 45 degree angle, paralleling Parker Street. 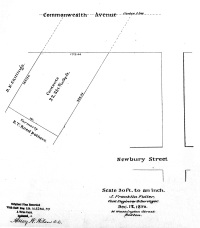 On March 1, 1872, the company sold a series of parcels to a real estate investment trust – known as the Beacon Street Lands Trust – formed by Grenville T. W. Braman, Henry D. Hyde, and Frank W. Andrews. Henry Dwight Hyde was an attorney. He and his wife, Luvan Augusta (Charles) Hyde, lived at 153 West Newton and later would live at 380 Commonwealth. Frank William Andrews was a real estate investor and former importer of iron and crockery. He and his wife, Maria Frances (Adams) Andrews, lived at 6 Marlborough. 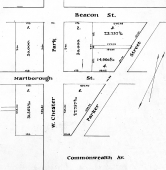 In 1877, the Commonwealth discontinued the portion of Parker Street between Beacon and Boylston as a public thoroughfare. The Commonwealth subsequently conveyed its interest in the roadway to the abutting land owners and the Boston Water Power Company conveyed to them its interest in the underlying land. The land owners then undertook a series of transactions to “square off” their parcels, eliminating the angled boundaries created by the former street.

On December 28, 1877, the Boston Water Power Company transferred to the City of Boston the land needed to extend Commonwealth further west to what would become Charlesgate East. 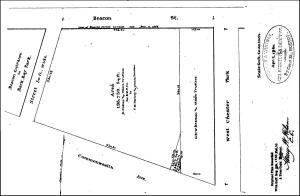 On June 1, 1880, the Boston Water Power Company also transferred to the City of Boston the land needed for Charlesgate East between Commonwealth and Beacon.

Commonwealth was laid out running northwest at an angle from Massachusetts Avenue (rather than continuing straight) and therefore included a triangular portion of the land the company previously had sold to the Beacon Street Lands Trust. The company continued to own the land to the west, and on June 1, 1880, it transferred the Beacon Street Lands Trust a triangular shaped lot of the same square footage as the land they had lost.

Also on June 1, 1880, the company sold the remainder of its land between the south side of Beacon and the north side Commonwealth to a real estate investment trust – known as the Commonwealth Avenue Lands Trust – formed by Grenville T. W. Braman, Francis W. Palfrey, and Francis A. Osborn.

On October 15, 1880, the Boston Water Power Company sold the remainder of its land on the south side of Commonwealth to a real estate investment trust – known as The Park Entrance Lands Trust – formed by Grenville T. W. Braman, Henry D. Hyde, and Henry M. Whitney. Henry Melville Whitney was agent for the Metropolitan Steamship Company, and later would become its president and would found the West End Street Railway Company. He and his wife, Margaret Foster (Green) Whitney, lived in Brookline.

The trust purchased four parcels, including all of the land west of the parcel purchased by David Skillings and his partners in 1870, running to the intersection with Beacon Street (in what is now Kenmore Square), and south to Westland Avenue. 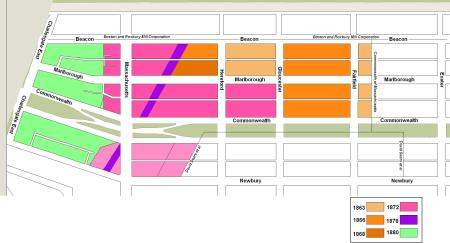 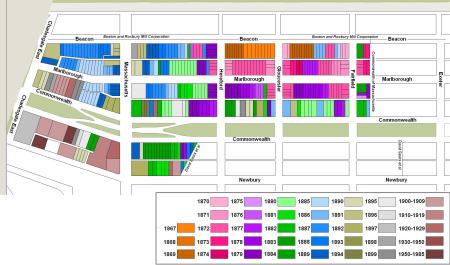