The block on the south side of Marlborough between Arlington and Berkeley is 596 feet in length and 112 feet from Marlborough to Alley 422.

The land was part of the approximately 108 acres of land in the Back Bay owned by the Commonwealth of Massachusetts.

The Commonwealth sold its land starting in 1857. The earliest transactions were by private sales negotiated by the Commissioners on the Back Bay. In 1860, the legislature required that all future sales be made through public auctions. The first auction was held on October 24, 1860, and they continued until March of 1872, when they were suspended due to depressed real estate values. In 1879, the legislature authorized the Harbor and Land Commissioners (successors to the Commissioners on the Back Bay) to sell lots with frontages of up to 100 feet by privately negotiated sale. The land sales resumed in May of 1879 and the last of the remaining land was sold in 1886.

Click here for more information on the Commonwealth of Massachusetts land in the Back Bay. 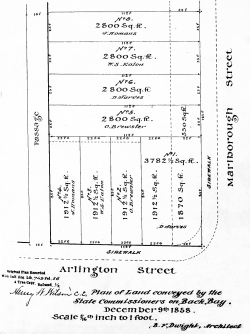 Central and Western Parcels. The Commonwealth sold the remainder of its land on the south side of Marlborough between Arlington and Berkeley on May 2, 1860.

The land to the west extending to Berkeley, with a frontage of 287 feet, was purchased by Caleb William Loring and Charles F. Choate, as trustees of a real estate investment trust formed by them with Francis B. Hayes and Franklin Evans.

The trust sold the eastern 47 feet on March 26, 1863, to Samuel F. Dalton, a merchant. On March 31, 1863, he acquired the western 7 feet of William Thomas’s land, and on January 16, 1865, he sold it and the eastern 11 feet of his larger lot to John Mixer, who built 16 Marlborough on the combined lot. On May 12, 1864, Samuel Dalton sold the remaining 36 feet to Ann Duncan Torrey and her sister, Sarah Parker (Torrey) Linzee, the widow of Thomas Charles Amory Linzee, who built their homes at 18-20 Marlborough.

On December 30, 1862, the trust sold the lot at 22 Marlborough to Lydia (Cabot) Jackson, widow of Patrick Tracy Jackson, and on March 25, 1863, it sold the lots at 24-26 Marlborough to Edward Ingersoll Browne, an attorney, and the lots at 28-30 Marlborough to Edward Ingersoll Browne and Samuel Turner Dana, as trustees of the estate of Augustus Thorndike. The five houses at 22-24-26-28-30 Marlborough were designed and built as a single block. Lydia Jackson made 22 Marlborough her home. Her brother-in-law and sister, Dr. Charles Gideon Putnam and Elizabeth Cabot (Jackson) Putnam, purchased 24 Marlborough on December 14, 1864, and Charles Putnam’s sister, Louisa (Putnam) Peabody, the widow of Salem merchant Joseph Augustus Peabody, purchased 26 Marlborough on January 20, 1865. The Thorndike estate sold 30 Marlborough on February 8, 1865 to Edward Darley Boit, but retained 28 Marlborough and leased it to various residents until October 1, 1872, when it sold the house to Dr. Benjamin Shurtleff Shaw.

On December 18, 1862, and January 17, 1863, the trust sold the two lots to the west of 30 Marlborough to Harriet (Upham) Putnam, the wife of John Pickering Putnam (one lot purchased by her and the other by a trust for her benefit). J. Pickering Putnam was the brother of Charles Gideon Putnam and Louisa (Putnam) Peabody. The Putnams built a home at 32 Marlborough and left the lot to the west vacant.

The lot at the corner of Marlborough and Berkeley, with a frontage of 87 feet, was purchased from the trust on November 1, 1862, by shipping merchant and US Congressman Samuel Hooper. He and his wife, Anne (Sturgis) Hooper, lived at 27 Commonwealth, across the alley. On March 15, 1863, he acquired Harriet Putnam’s vacant lot to the east, with a frontage of 26 feet 8 inches. He combined the lots and sold them on September 10, 1870, to Anita (Smith) Caldwell, the wife of Josiah Caldwell. The deed included a restriction limiting to 24 feet the height of any building built on a 20 foot strip of land running the entire width of the property (north to south) between 72 and 92 feet east of Berkeley. This restriction probably was intended to preserve light for Samuel Hooper’s home at 27 Commonwealth. The house at 299 Berkeley was not completed until 1877-1878.

Original Construction. With the exception of 299 Berkeley, all of the houses on the south side of Marlborough between Arlington and Berkeley had been constructed by 1871.

The plans below illustrate when the land on the block was first purchased from the Commonwealth (based on the dates of the deeds) and when houses were first constructed (based on news reports and on dates provided in Bainbridge Bunting’s Houses of Boston’s Back Bay).

Original construction on the south side of Marlborough between Arlington and Berkeley.

The deeds from the Commonwealth (Suffolk Co. Deed Registry, Book 749, p. 55, 128, 130, and 257; Book 774, p. 301; and Book 778, p. 147 and 195) specified that any building on the land was to be “at least three stories high for the main part thereof and shall not in any event be used for a stable, or for any mechanical or manufacturing purposes;” that the front walls were to be set back twenty-two feet from Marlborough, with “steps, windows, porticos, and other usual projections appurtenant thereto” allowed in the reserved space; and that “no cellar or lower floor of any building shall be placed more than four feet below the level of the mill-dam, as fixed by the top surface of the hammered stone at the south-easterly corner of the emptying sluices.” The deeds also provided that the owners of the land would have the right to “plant and cultivate trees on the side walks” in front of their land provided that they left a distance of ten feet between the front boundary of their lots and the trees.

In November of 1858, the Commissioners on the Back Bay voted to clarify that the prohibition on stables would not be enforced “in such a manner as to prevent the erection and use of private stables by gentlemen as appurtenances to their own dwelling homes; provided, such stables are so constructed and used as not to be justly offensive to the occupants of the surrounding buildings.” This clarification was subsequently published in the auction catalogues issued by the Commissioners, but usually was not included in the deeds.

In January of 1863, the Commissioners on Public Lands (successors to the Commissioners on the Back Bay) adopted dimensional limitations on the projections allowed in the setback area. These applied to the deeds previously executed by the Commonwealth for land on the south side of Marlborough between Arlington and Berkeley.

The Commonwealth of Massachusetts conveyed the land on the south side of Marlborough between Arlington and Berkeley by the following deeds: