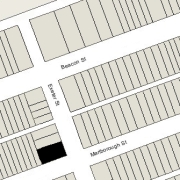 11 Exeter was designed by Peabody and Stearns, architects, and built in 1872 for building contractor George Wheatland, Jr., for speculative sale, one of three contiguous houses (7-9-11 Exeter). 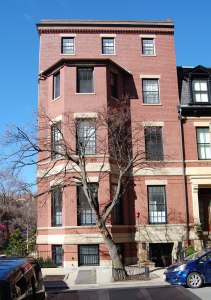 In January of 1872, Peabody and Stearns filed a Notice of Intention to Build the three houses with the office of the Inspector of Buildings (reported in the Boston Herald on January 23, 1872). Construction started soon thereafter and on July 19, 1872, the Boston Traveller reported that work on the three houses was “finishing.”

11 Exeter was purchased from George Wheatland, Jr., on May 12, 1873, by Marshall Woods. He and his wife, Anne Brown (Francis) Woods, lived in Providence. A physician by training, he never practiced medicine but rather was an investor in real estate and other ventures. He served as treasurer of Brown University from 1866 to 1882.

Click here for an index to the deeds for 11 Exeter, and click here for further information about the land between the north side of Marlborough and Alley 417, from Exeter to Fairfield.

11 Exeter became the home of Marshall and Anne Woods’s son-in-law and daughter, Samuel Appleton Browne Abbott and Abby Francis (Woods) Abbott, who married in October of 1873. Prior to their marriage, he had lived briefly at 6 Arlington with his parents, Josiah Gardner Abbott and Caroline (Livermore) Abbott, and before that at 379 Beacon with his first wife, Mary (Goddard) Abbott, and her mother, Mary (Goddard) Goddard, widow of David Goddard.  Mary Abbott died there in January of 1871.

Samuel Abbott was a lawyer and served as president of the Boston Public Library Board of Trustees from 1888 to 1895, overseeing the construction of the library building in Copley Square.

By 1892, they had been joined at 11 Exeter by Samuel Abbott’s sister, Sarah Livermore (Abbott) Fay, the widow of William Pickering Fay.  She continued to live with them in 1895.

Abby Abbott died in March of 1895.  Sarah Fay moved to 262 Beacon and Samuel Abbott went abroad.  In April of 1896, he married again, in Rome, to Maria Elizabeth Dexter.  After their marriage they lived in Italy, where he was the first director of the American Academy in Rome.

On April 25, 1898, 11 Exeter was purchased from Marshall Woods by Quincy Adams Shaw, Jr. He and his wife, Sarah Williams (Pemberton) Shaw, made it their home and raised their only child, Quincy Adams Shaw, III, there. They previously had lived at 125 Beacon.

In 1902, the Shaws purchased the Charles Greeley Loring house in Pride’s Crossing, which they remodeled and called Pompey’s Garden.

In 1914, he purchased land in Eastham on Cape Cod and subsequently built a home, Cedar Bank.  In the 1920s, he added a golf course to the property.

In June of 1919, Quincy Adams Shaw, III, married to Augustine van Wickle.  After their marriage, they lived briefly at 284 Commonwealth with her step-father and mother, William Leander McKee and Bessie (Pardee) van Wickle McKee, and then at 101 Chestnut.

In December of 1922, Sarah Shaw applied for (and subsequently received) permission to remodel 11 Exeter, adding a story to the main building, modifying the bay windows, and adding a two-story ell at the rear, in the former yard area between 11 Exeter and 225 Marlborough, with the western wall being the party wall with 225 Marlborough. She moved the entrance from Exeter to Marlborough, creating a first floor entrance and two basement level entrances. After this remodeling, there was no entrance on Exeter.

The remodeling was designed by Richardson, Barott, and Richardson.  Architectural plans for the remodeling — including elevations, floor plans, and framing plans — are included in the City of Boston Blueprints Collection in the Boston City Archives (reference BIN D-39).

Quincy Adams Shaw married again in mid-1948 to Lydia Emmet (Eliot) Codman Turner, the former wife of Alfred Codman and the widow of Oliver Turner.  She lived at 3 Arlington, where she also maintained a dressmaking shop, Lydia Codman Gowns.  After their marriage, they lived at 11 Exeter until about 1951, when they moved to 31 Lime.

11 Exeter was shown as vacant in the 1952 City Directory.

On December 13, 1951, 11 Exeter was acquired from Sarah Shaw’s estate by the Mimaur Realty Company, operated by Michael (Max) Lilly. He also was a partner in the Lilly Construction Company with his father, Harry Lilly, and brother, David Lilly.

In January of 1952, it applied for (and subsequently received) permission to convert the property from a single-family dwelling into ten apartments.  It appears likely that it was as part of this remodeling that the street level entrance at 11 Exeter was added and that an additional story was built on the ell on Marlborough. The remodeling was designed by David J. Abrahams & Associates.

On December 22, 1958, Mimaur Realty transferred 11 Exeter to Michael Lilly and his wife, Goldie Gertrude (Karess) Lilly, as trustees of the Michael Realty Trust.

The property changed hands and on June 28, 1962, was acquired by Archibald H. Ferran and his wife, Dora (Buckman) Ferran, trustees of the Wesco Realty Trust. In August of 1964, the trust applied for (and subsequently received) permission to remove and replace the existing entrance steps. The replacement steps apparently were of metal.

The property subsequently changed hands and on January 23, 1978, was purchased by Joseph O. Melikian and his wife, Anne B. Melikian.  On October 15, 1982, they transferred the property into Anne Melikian’s name.  On August 31, 1999, Anne Melikian transferred the property to the Malik-Exeter LP.  In September of 1999, Kilem Management Corporation (the Melikians’ property management firm and sole general partner of the Melik-Exeter LP) applied for (and subsequently received) permission to replace the metal front entrance steps with masonry steps.

On January 28, 2016, 11 Exeter was purchased from the Melik-Exeter LP by the Marlboro Exeter LLC (managed by the MG2 Group LLC, Joseph Donovan, manager).

In November of 2016, Marlboro Exeter LLC applied for (and subsequently received) permission to remodel the property into nine units.

On February 5, 2018, it converted the property into eight condominium units, The Abbott Condominium.

Below are architectural renderings of 11 Exeter prepared by Richardson, Barott, and Richardson in 1922, remodeling and expanding the house for Sarah (Pemberton) Shaw, showing the Marlborough elevation, and the front (Exeter) and rear (western) elevations; the original blueprints are located in the City of Boston Blueprints Collection in the Boston City Archives (reference BIN D-39). 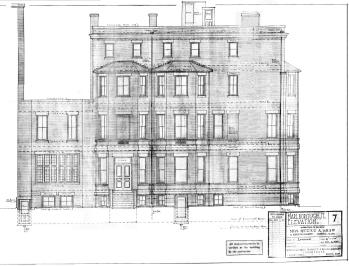