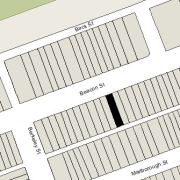 125 Beacon is located on the south side of Beacon, between Arlington and Berkeley, with 121 Beacon to the east and 127 Beacon to the west.

125 Beacon was designed by architect Alden Frink and built in 1865-1866 by builder Albert Hannibal Kelsey, for speculative sale.

An August 19, 1865, article in the Boston Daily Advertiser reported that “on the lot no. 125 Beacon street a house has just been started which is to be built from plans by Alden Frink, the architect. A. H. Kelsey is the builder. This house is to be four stories high with basement and French roof, brown-stone front, 22½ by 70 feet, and to be built in good style in keeping with other houses in the neighborhood.” A September 8, 1865, Boston Evening Transcript article added that it would be “finished inside with black walnut and pine.”

Albert Hannibal Kelsey, who built 125 Beacon, was a building contractor and mill engineer best known for his extensive work in Lewiston, Maine, where he built the canal and guard locks, planned the streets, and built the Bates, Hill, Androscoggin, Lewiston, and Continental Mills, and the DeWitt Hotel. He and his wife, Charlotte (Upton) Kelsey, lived in Belmont.

The land for 125 Beacon had been owned by John Wooldredge, a shoe manufacturer from Lynn. On May 1, 1865, he had entered into a contract with architect Charles K. Kirby, who was just completing the houses at 119-121 Beacon. Under the contract, Charles Kirby agreed to “immediately take possession of said land and commence erection of a dwelling house” to certain specifications, and John Wooldredge agreed to sell him the land once the house was completed. On July 8, 1865, Charles Kirby assigned his rights and responsibilities to Albert Kelsey, who proceeded to build the house with Alden Frink as the architect. On May 22, 1866, after the house was completed, John Wooldredge sold the land to Albert Kelsey.

John Wooldredge had purchased the land for 125 Beacon on April 19, 1864, from William Warren Goddard and Abbott Lawrence. It was part of a tract of land William Goddard and Abbott Lawrence’s brother, T. Bigelow Lawrence, had purchased from the Commonwealth of Massachusetts on August 1, 1857. That tract included all of the land on the south side of Beacon Street from Arlington to Berkeley.

Click here for and index to the deeds for 125 Beacon, and click here for further information about the land on the south side of Beacon from Arlington to Berkeley, north of Alley 421.

After it was completed, 125 Beacon did not immediately sell and on April 25, 1867, it was offered at public auction. The April 19, 1867, Boston Traveller announcement of the auction noted that it was “supplied with spacious and elegantly finished apartments, and all the appliances that mechanical skill and ingenuity could suggest, not only for the comfort and convenience but for the luxury of the occupant. The entire house is supplied with elegant marble mantles — soap-stone fire places, large plate glass windows and inside shutters and blinds.”

On September 29, 1868, 125 Beacon was purchased from Albert Kelsey by A. Louisa (Thompson) Eldridge, the wife of John Seabury Eldridge. They previously had lived at 232 Beacon.  They also maintained a home in Canton.

On July 2, 1874, 125 Beacon was purchased from A. Louisa Eldridge by carriage manufacturer William Philip Sargent. He and his wife, Hannah J. (Clement) Sargent, made it their home. They previously had lived at 407 Columbus.

The house was not listed in the 1889 Blue Book.

By the 1889-1890 winter season, 125 Beacon was the home of the Sargents’ son and daughter-in-law, Charles William Sargent and Elizabeth (Denny) Sargent. They previously had lived at 249 Newbury. He was a dealer in leather and hides.

Charles and Elizabeth Sargent were living elsewhere during the 1890-1891 winter season and 125 Beacon was the home of shoe manufacturer Charles Patten Shillaber and his wife, Helen Starr (Camerden) Shillaber. They previously had lived at the Hotel Palmerston at 177 West Chester Park. They had moved to 339 Beacon by the 1891-1892 season.

Charles and Elizabeth Sargent resumed living at 125 Beacon. They continued to live there during the 1895-1896 winter season, but moved thereafter, possibly to Pasadena, California, where he died in January of 1898. 125 remained in the Sargent family and was leased to others.

During the 1896-1897 winter season, 125 Beacon was the home of wholesale boot merchant Chester Hasbrouck Davis and his wife, Florence Elizabeth (Endicott) Davis.  Florence Davis’s sister, Mary Caroline Endicott, lived with them.  By 1898, the Davises (and possibly Mary Endicott) had moved to 118 Beacon.

During the 1898-1899 winter season, 125 Beacon was the home of attorney John Lowell, Jr., and his wife, Mary Emlen (Hale) Lowell.  They previously had lived at 237 Beacon.  They also maintained a home in Chestnut Hill.  By 1900, they had moved to 24 Commonwealth, which had been his parents’ home (his father had died in May of 1897 and his mother had moved soon thereafter).

During the latter part of the 1899-1900 winter season, from about January of 1900, 125 Beacon was the home of William Rotch and his wife, Edith Rotch (Eliot) Rotch. They also maintained a home in Jamaica Plan. He was a consulting engineer and manager of trust properties. By the 1900-1901 winter season, they were living at 413 Beacon.

By the time of the 1900 US Census, taken in June, 125 Beacon was once again the home of Elizabeth (Denny) Sargent and her children.

By the 1900-1901 winter season, 125 Beacon was the home of Henry Salisbury Millard and his wife, Harriet (Stevens) Millard, who operated it as a lodging house.  They previously had lived at 121 Beacon, where they also operated a lodging house.  He was a real estate dealer and formerly had been a boot and shoe manufacturer in North Adams, Massachusetts.

By the 1903-1904 winter season, 125 Beacon was the home of Dr. William Lothrop Edwards, a physician, and his wife, Alice (Loring) Edwards.  They previously had lived at 102 Beacon.

On August 1, 1905, 125 Beacon was purchased from the Sargent family by attorney James Lowell Putnam. He and his wife, Eleanor Jay (Robinson) Putnam, made it their home. They previously had lived at 32 Commonwealth.  They continued to live at 125 Beacon in 1913, but had moved to 2 Raleigh by 1914.

During the 1914-1915 winter season, 125 Beacon was the home of Mrs. Harriet Pierce (Weeks) Anthony, the widow of banker Silas Reed Anthony, who had died in March of 1914.  Their unmarried children — Ruth Anthony and Reed Pierce Anthony — lived with her.  Prior to her husband’s death, they had lived at 113 Commonwealth, which Mrs. Anthony continued to own.  They had moved to 175 Beacon by the 1915-1916 season.

On July 15, 1915, 125 Beacon was acquired from James Putnam by attorney Edward Sohier Welch. He and his wife, Barbara (Hinkley) Welch, made it their home. They previously had lived at 23 Charles River Square. They also maintained a home in Weston.

The Welches continued to live at 125 Beacon in 1925. They divorced in 1926 and on June 24, 1926, he transferred 125 Beacon to her.  E. Sohier Welch remarried to Margaret (Permain) Bowditch (the former wife of metal dealer Manfred Bowditch) and moved to 20 Louisburg Square.

In July of 1928, Barbara (Hinkley) Welch married again, to attorney Roger Wolcott, Jr. He previously had been married to Claire Morton Prince; they had divorced in 1927.

After their marriage, the Wolcotts lived at 125 Beacon. They also maintained a home in Milton.

The Wolcotts continued to live at 125 Beacon until about 1934, when they made Milton their primary residence.

In 1936, Barbara Wolcott had 125 Beacon remodeled into apartments. Two applications were filed, in both cases by the architect, George Nelson Jacobs. In February of 1936, H. Pierce from Nelson’s office filed to remodel the house into ten apartments. The application was approved by the Board of Appeal on November 18, 1936, but was then abandoned. A new application was filed in December of 1936 by George Nelson Jacobs. It was approved by the Board of Appeal on January 6, 1937. The new proposal included significant modifications to the façade, “squaring out” the mansard roof of the original townhouse and adding another story. During the construction, the number of units was increased to thirteen.

On January 26, 1940, Edward Isaac Fine and Solomon H. Rubin foreclosed on their mortgage to Bernard Brooker and took position of 125 Beacon. Edward Fine was president of the Eagle Electric Supply Company. He and his wife, Beatrice (Bach) Fine, lived in Newton.

125 Beacon remained the property of the Fine family, remaining an apartment house.