9 Exeter is located on the west side of Exeter, between Beacon and Marlborough, with 7 Exeter to the north and 11 Exeter to the south.

9 Exeter was designed by Peabody and Stearns, architects, and built in 1872 for building contractor George Wheatland, Jr., for speculative sale, one of three contiguous houses (7-9-11 Exeter).

In January of 1872, Peabody and Stearns filed a Notice of Intention to Build the three houses with the office of the Inspector of Buildings (reported in the Boston Herald on January 23, 1872).   Construction started soon thereafter and on July 19, 1872, the Boston Traveller reported that work on the three houses was “finishing.”

He sold 11 Exeter first, in May of 1873, and included in that deed a stipulation for the benefit of the buyer assuring that any house built to the west, at 225 Marlborough, would have no windows on its eastern wall located any further south than 52 feet from Marlborough (i.e., on the portion of the wall behind 11 Exeter).

The deed for 225 Marlborough also included an easement for a “right of unobstructed light and air forever” over a strip of land at the rear of 9 Exeter (which George Wheatland, Jr., still owned) starting at the southwest corner of the lot at 9 Exeter and measuring 16 feet 2 inches north-south and 10 feet east-west.

Click here for an index to the deeds for 9 Exeter, and click here for further information about the land between the north side of Marlborough and Alley 417, from Exeter to Fairfield.

By 1875, 9 Exeter was the home of boot and shoe merchant Emile Marquéze and his wife, Caroline Augusta (Haseltine) Marquéze, who leased it from George Wheatland, Jr. They previously had lived in New Orleans. They continued to live at 9 Exeter in 1876, but by 1877 had moved to the Hotel Hamilton at 260 Clarendon.

On May 2, 1876, 9 Exeter was purchased from George Wheatland, Jr., by Miss Ellen Frothingham. She was a translator of German literature, credited with translating into English Lessing’s Nathan der Weise (1868) and Laokoon (1874), Goethe’s Hermann und Dorothea (1870), and works by several other authors.

It appears that George Wheatland, Jr., had leased 9 Exeter as a furnished residence, and that, after buying the house, Ellen Frothingham did not wish to keep the furnishings.  On September 29, 1876, George Wheatland, Jr.’s auction house, Wheatland & Bird, offered the “genteel furniture,” chandeliers, and other fixtures at 9 Exeter for sale at public auction.

Ellen Frothingham resumed living at 9 Exeter in 1888 and continued to live there during the 1889-1890 winter season. Katherine Hubbard was a victim of tuberculosis and, in early 1890, she and her brother traveled to Colorado Springs for her health.  Ellen Frothingham accompanied them (or joined them later in 1890) and remained there with her niece.

During the 1890-1891 winter season, 9 Exeter was the home of Alfred Perkins Rockwell and his wife, Katharine Virgina (Foote) Rockwell.  During the 1887-1888 season, they had lived at 267 Beacon, the home of Ellen Frothingham’s brother and sister-in-law, Edward and Eugenia (Mifflin) Frothingham.  The Rockwells subsequently had traveled abroad, returning in May of 1890.

Alfred Rockwell was a professor of mining at MIT in the early 1870s, having held a similar position at Sheffield Scientific School in New Haven in the late 1860s.  Following the Boston Fire in November of 1872, he was appointed Chairman of the Boston Fire Commission.  From 1876 to 1879, he was president of the Eastern Railroad, and from 1879 until his retirement in 1886, he was treasurer of the Great Falls Manufacturing Company, a textile firm.

During the 1892-1893 winter season, it was the home of Esther Manton (Young) Foote, the widow of Cambridge banker George Luther Foote.  She married again in June of 1893 to Rev. William Basil King.  He was rector of Christ Church (Episcopal) in Cambridge; he resigned in 1900 and became a novelist, writing under the name Basil King.  After their marriage they lived in Cambridge.

During the 1893-1894 winter season, 9 Exeter was the home of Rev. Stopford Wentworth Brooke, pastor of First Church (Unitarian), and his wife, Helen (Ellis) Brooke.  They had married in June of 1893 and 9 Exeter was their first home together.  Prior to their marriage, Rev. Brooke had lived in an apartment at 409 Marlborough and Helen Ellis had lived with her half-sister, Effie Ellis, at 176 Marlborough. The Brookes had moved to 170 Beacon by the 1894-1895 season. 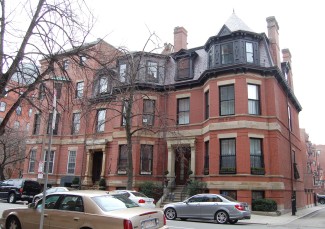 Ellen Frothingham continued to live at 9 Exeter during the 1896-1897 winter season, but moved thereafter to the Hotel Agassiz at 191 Commonwealth by 1898.

During the 1897-1898 winter season, 9 Exeter was the home of Robert Hooper Stevenson and his wife, Caroline (Young) Stevenson.  They previously had lived at 58 Chestnut.  He was treasurer of the Lowell Machine Company.  He served in the Civil War and was brevetted a Brigadier General.  By the 1898-1899 season, they had moved to 357 Beacon.

On July 12, 1899, 9 Exeter was purchased from Catharine Thomas by Annie Bolton (Fay) Matthews, the widow of William A. Matthews. She lived at 198 Commonwealth.

During the 1899-1900 winter season, 9 Exeter was the home of Walter Austin, an attorney, and his wife, Mabel Lindsley (Frazar) Austin. They previously had lived in an apartment at 199 Marlborough. By June of 1900, at the time of the US Census, they had moved to 80 Bay State Road.

By the 1900-1901 winter season, 9 Exeter was the home of Annie Matthews’s son-in-law and daughter, Wallace Bryant and Annie (Nanna) Bolton (Matthews) Bryant.  They had married in August of 1898 and subsequently lived in New York City.  Wallace Bryant was a portrait artist and Nanna Bryant was a painter and sculptress. Prior to their marriage, he had lived in New York and before that at 2 Commonwealth, and she had lived with her mother at 198 Commonwealth.

The Bryants remodeled the house to convert the top floor into a studio, including modifying the fenestration to provide more light.

In February of 1901, Wallace Bryant held an exhibition and sale of his work at 9 Exeter.  A February 10, 1901, Boston Herald article on the exhibit commented that “Mr. Bryant has fitted up his Exeter street house in true artistic fashion.  His collection of old antiques and tapestries and china is probably the finest of modern times. The colonial dining room is a gem. The studio, which is of course to him the most interesting part of the house, takes the whole top story.”

Annie (Fay) Matthews died in May of 1916 and 9 Exeter was inherited by Nanna Bryant.

On September 15, 1922, 9 Exeter was purchased from Nanna (Matthews) Bryant by Harold D. Hayden, an accountant, who lived in Milton.

By the 1923-1924 winter season, 9 Exeter was the home of Lilly Belle (Price) Crowell, the widow of Chester Henry Crowell, and their daughter, Ruby M. Crowell. They previously had lived at 1298 Commonwealth in Allston. They also maintained a home at Marblehead Neck.

In October of 1924, Harold Hayden applied for (and subsequently received) permission to add a one story ell at the rear of the property for use as servants’ quarters. The remodeling was designed by architect Arthur H. Bowditch.

Lillie Crowell and Ruby Crowell continued to live at 9 Exeter. Ruby Crowell died in 1927, and Lilly Crowell moved soon thereafter. By 1928, she was living in Arlington.

On August 12, 1927, 9 Exeter was purchased from Harold Hayden by investment broker Richard Dudley Sears, Jr. and his wife, Frederica Fulton (Leser) Sears. They had married March of 1926, after which they had spent about eight months on a wedding trip around the world.  Prior to their marriage, he had lived with his parents, Richard and Eleanor (Cochrane) Sears, at 232 Beacon.

In October of 1927, he filed for (and subsequently received) permission to add a second story to the ell at the rear of the property. The remodeling was designed by architects Bigelow and Wadsworth.

The Searses also maintained a home in Prides Crossing.

Frederica Sears died in October of 1966.  Richard Sears continued to live at 9 Exeter until about 1972.

On January 15, 1974, 9 Exeter was purchased from Richard D. Sears by Stephen W. Giddings and his wife, Stephanie L. Giddings.  Stephen Giddings was director of planning and development for the Boston Housing Authority.

On March 31, 1977, 9 Exeter was purchased from the Giddingses by J. Brent Finnegan, an insurance broker, and his wife, Karen W. Finnegan.

In January of 1992, Brent Finnegan filed for (and subsequently received) permission to add a parking space at the rear of the property and to relocate the basement stairs and rear entrance to the house to accommodate a driveway. On December 28, 1992, the Finnegans entered into a reciprocal easement agreement with Webster Williams, Jr., owner of 7 Exeter, for the construction and use of parking spaces behind 7 Exeter and 9 Exeter.

The property subsequently changed hands. It remained a single-family dwelling in 2020.