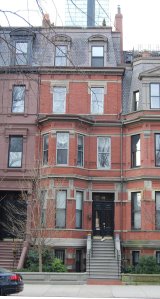 Click here for an index to the deeds for 118 Commonwealth, and click here for further information about the land between the south side of Commonwealth and Alley 435, from Clarendon to Dartmouth.

In May of 1872, Benjamin D. Whitcomb, builder, received a permit to build houses at 118 and 120 Commonwealth (reported in the Boston Evening Transcript on May 18, 1872).  Construction probably started soon thereafter, with 118 Commonwealth built on the 20 foot lot and 120 Commonwealth on the combined 36 foot lot.  A July 19, 1872, Boston Traveller article on “present building operations” in the Back Bay reported that the foundations were being laid for the houses.

On April 9, 1875, 118 Commonwealth was purchased from James B. Case by Elizabeth Waterman (Hicks) Harding, the wife of wool and cotton merchant William H. Harding. They previously had lived in Jamaica Plain.

Albert Harding married in 1880 to Mary Manzer Clark.  After their marriage, they lived at 374 Marlborough.

William Harding died in May of 1883.  Elizabeth Harding continued to live at 118 Commonwealth.  Her granddaughter, Eliza, lived with her until her marriage in April of 1892 to Daniel Richard Randall, an attorney from Annapolis, Maryland.

Elizabeth Harding died in July of 1902.  In her will, dated December 6, 1897, she left 118 Commonwealth to her son, William (who was living there with her), and left a house she owned at 137 Bay State Road to her son, Albert (who was living there at the time).  She named her two sons as her executors.  The next year, in September of 1898, she made a codicil to the will naming her granddaughter’s husband, Daniel Richard Randall, as sole executor, replacing her sons.

After his mother’s death, William F. Harding moved to the Hotel Vendome. He continued to own 118 Commonwealth and leased it to others.

By the 1903-1904 winter season, 118 Commonwealth was the home of Dr. George H. Payne, a dentist, and his wife, Bertha L. (Luce) Payne. He also maintained his dental office at the house. They previously had lived in Cambridge and he had maintained his practice at 283 Dartmouth.

The Paynes also provided office space to several other dentists and rented lodgings to Charles C. Newcomb, a produce merchant, and his brother, George Dillingham Newcomb, treasurer of an iron foundry, neither of whom was married.

They continued to live at 118 Commonwealth during the 1912-1913 winter season, but moved thereafter: the Paynes to Haddon Hall at 282 Berkeley (29 Commonwealth) and Charles and George Newcomb to 28 Commonwealth.

By the 1913-1914 winter season, 118 Commonwealth had been leased by Dr. James Ralph Taylor, Jr., a physician, for his medical offices. He previously had maintained his offices at 2 Commonwealth.  Dr. Taylor’s primary home in Quincy, but he may also have maintained a residence at 118 Commonwealth.

He continued to maintain his offices at 118 Commonwealth through about 1920. The house also was rented to various lodgers during this period. By 1921, Dr. Taylor had moved his home and office to 124 Commonwealth.

William Harding had died in September of 1917 and 118 Commonwealth was inherited by his daughter, Eliza Windsor (Harding) Randall. 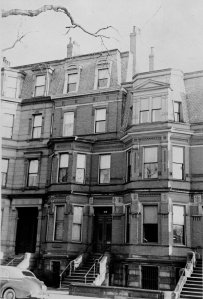 In May of 1922, the Johnsons received permission to build a two car garage at the back of 118 Commonwealth.  The decision was appealed by the neighbors and overturned in September of 1922 by the State Fire Marshall, who found that allowing the garages would create a congested condition in the alleys and a potential fire hazard because of the accompanying storage of gasoline in the tanks of the cars.  A similar application by Frederick Blood, owner of 124 Commonwealth, was overturned in the same decision.

By 1923, the Johnsons had been joined by Anna Johnson’s sister, Georgianna O’Neill.

At about the same time, they also were joined by Bertha Ellen Tuttle, probably a lodger.  She previously had lived at 23 Beacon.  She continued to live at 118 Commonwealth until her death in December of 1933.

On August 20, 1953, 118 Commonwealth was acquired from Louise Day Hicks by Ida May (Smith) Weber Symington Rolin, the wife of William Alphonso Rolin, of Kennett Square, Pennsylvania. In December of 1953, she filed for (and subsequently received) permission to convert the house from a single-family dwelling into a lodging house.

William and Ida Rolin made 118 Commonwealth their home and operated it as a lodging house. He died in 1955, and she continued to live there until about 1959.

On October 26, 1959, 118 Commonwealth was purchased from Ida S. Rolin by Kathryn (McLeod) MacPherson, the widow of Ewen John Douglas MacPherson, who operated it as a lodging house. She previously had lived at 20 Jamaicaway.

On January 3, 1961, 118 Commonwealth was acquired from Kathryn MacPherson by Kenneth L. MacLean and Donald R. MacLean, trustees of the Colonial Apartment Trust.

On June 28, 1962, 118 Commonwealth was purchased from the Colonial Apartment Trust by Miss Annabelle Bowditch, a public stenographer, who continued to operate it as a lodging house. She previously had lived at 196 Bay State Road.

Annabelle Bowditch died in June of 1973 and 118 Commonwealth was inherited by her sister, Caroline P. Bowditch. She lived at 146 Beacon and in Mattapoisett with their sisters, Ruth William (Bowditch) Munro, the widow of Willis Munro, and Marion (Bowditch) Steeves, the former wife of Walter Bingham Steeves.

On October 6, 1978, 118 Commonwealth was purchased from Caroline Bowditch by her sister, Marion (Bowditch) Steeves

In November of 1979, he filed for (and subsequently received) permission to convert the property from a lodging house into five apartments, and on November 19, 1979, he transferred the property to himself as trustee of The Comm. Ave. Trust.

On April 24, 1980, he converted the property into five condominium units, The Condominium at 118 Commonwealth Avenue.