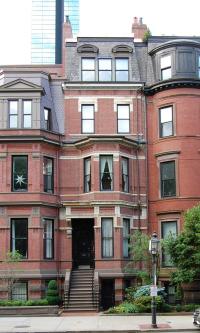 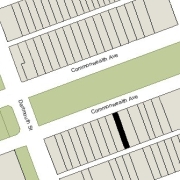 122 and 124 Commonwealth were built on two lots, both originally 26 feet wide, that were purchased from the Commonwealth of Massachusetts on August 22, 1865, by William Chadbourne, a dry goods merchant. He and his wife, Isabel (Patterson) Chadbourne, lived at 48 Commonwealth. On May 22, 1866, he sold the lot to the east to his sister, Clara Dwight (Chadbourne) Berry of Cambridge, the widow of Charles Thomas Berry, and lot to the west to his sister Martha McMillan (Chadbourne) Haven of Charlton, Massachusetts, the wife of Rev. John Haven. On October 13, 1869, both lots were purchased by Charles Austin Wood, an insurance agent and real estate investor, and the original owner of the Hotel Vendome.

On December 30, 1870, Charles Wood sold the eastern lot and 8 feet 8 inches of the western lot to Laura Lucretia (Williams) Case, the wife of wholesale dry goods merchant and banker James Brown Case.  They lived at 52 Boylston and in Weston.  They had 122 Commonwealth built on the combined 34 foot 8 inch lot, and sold it in April of 1872, to Frances (Van Dusen) Lee, the wife of James Lee, Jr.

On March 18, 1871, Charles Wood sold the remaining 17 feet 4 inches of his western lot to Martha Webster (Seaver) Cowing, the wife of Walter Herbert Cowing, who had 124 Commonwealth built on it.  Construction probably started later that year; a July 19, 1872, Boston Traveller article on “present building operations” in the Back Bay reported that its exterior was “about done.”

Click here for an index to the deeds for 124 Commonwealth, and click here for further information about the land between the south side of Commonwealth and Alley 435, from Clarendon to Dartmouth.

By 1873, Walter and Martha Cowing made 124 Commonwealth their home.  They previously had lived at 314 Shawmut and, before that, at 84 Chester Square. He was a boot and shoe manufacturer and auctioneer, in partnership with George E. Hatch in the firm of Cowing and Hatch. 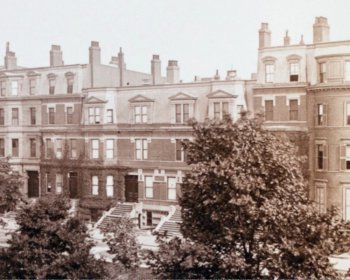 By the 1878-1879 winter season, 124 Commonwealth was the home of Dr. Edwin Perley Bradbury, a dentist, and his wife, Louisa Selby (Jordan) Bradbury.  He also maintained his dental office at the house and provided office space to other dentists. The Bradburys previously had lived at the Hotel Boylston (Boylston at Tremont) and he had maintained offices at 196 Boylston.

From 1879, Dr. Harry Fairfield Hamilton, who had graduated from the Harvard Dental School the previous year, also maintained his office at 124 Commonwealth. He was a lodger at 15 Joy, then at 47 Mt. Vernon, and then at 19 Mt. Vernon after that.

The Bradburys continued to live at 124 Commonwealth during the 1886-1887 winter season, but moved thereafter to a new home they had built at 16 Exeter (196 Marlborough), where he also moved his dental office. Harry Hamilton also moved briefly to 196 Marlborough and then, in 1888, to 208 Beacon.

By the late 1890s, they also maintained a home at Sea View (Humarock Beach) in Scituate.

On December 3, 1901, the Kimballs offered 124 Commonwealth for sale at public auction. They subsequently moved to Newton. By 1906, they had returned to Boston and lived at 229 Newbury, where he also maintained his medical office.

The successful bidder for 124 Commonwealth was Russell Sturgis Codman, a real estate dealer. He was acting for Sarah Maria (Parker) Cunningham), who took title to the property from Samuel Kimball on December 13, 1901. She previously had lived at 357 Marlborough. She was the widow of shipping merchant Frederic Cunningham and the mother-in-law of Episcopal Bishop William Lawrence, who lived next door at 122 Commonwealth.

In his Memories of a Happy Life, Bishop Lawrence described her purchase on Commonwealth as follows:  “One of the happy incidents of our married life was that, some years before she died, she was enabled to live in the house next to us, with doors cut through.  The children always found joy, wit, and a piano there.”

In his Memories, Bishop Lawrence’s son, Bishop William Appleton Lawrence, provides further detail, noting that “Pa bought Dr. Kimball’s house for Grandma Cunningham, and she moved next door; and he cut a large door through between our dining-rooms, which made it possible for us to have the Christmas and Thanksgiving parties occasionally.”  The dining rooms of 122 and 124 Commonwealth were at the rear of the buildings on the first floors.

By 1907, Sarah Cunningham had been joined by her sister, Julia Cornelia (Parker) Arklay, widow of dry goods merchant Patrick Arklay. She previously had lived in New York City with her son-in-law and daughter, Frederic Gore King and Jessie (Arklay) King. Jessie King had died in March of 1907 and Julia Arklay probably had moved thereafter to live with her sister in Boston.  Julia Arklay died at 124 Commonwealth in October of 1907.

Sarah Cunningham died in January of 1913, and on March 20, 1913, her executors transferred 124 Commonwealth to her daughter, Julia Lawrence, who leased it to others.

By the 1913-1914 winter season, 124 Commonwealth was the home of Isaac Sweetser Tolman, a notebroker, and his wife, Mabel Wells (Leach) Tolman.  They previously had lived at The Abbotsford at 186 Commonwealth.

The Tolmans continued to live at 124 Commonwealth during the 1917-1918 winter season, after which they moved to the Hotel Vendome. Mabel Tolman died in November of 1918.

In 1921, 124 Commonwealth was briefly the home of Joseph F. Low and his wife Harriet (Gilman) Low. He was president and treasurer of Hill, Smith, & Co., Inc., stationers.  They previously had lived at 1277 Commonwealth. By 1922, they were lodgers at 228 Commonwealth.

During the 1921-1922 winter season, 124 Commonwealth was the home of real estate broker Jacob Crowninshield Rogers and his wife, Anne E. (Sanders) Rogers. They previously had lived at 180 Bay State Road. They also maintained a home in Milton.

By 1922, 124 Commonwealth also had become the medical office of Dr. James Ralph Taylor, Jr., a physician, who lived in Quincy.  Dr. Taylor previously had leased 118 Commonwealth.

On March 27, 1922, 124 Commonwealth was purchased from Julia Lawrence by Frederick Lincoln Blood, the husband of Dr. Taylor’s sister, Annie Eunice (Taylor) Blood. The Bloods lived in Orleans on Cape Cod and leased the house to the Taylors, who made it their home as well as his office. By the mid-1920s the Taylors also maintained a home in Canaan, New Hampshire. 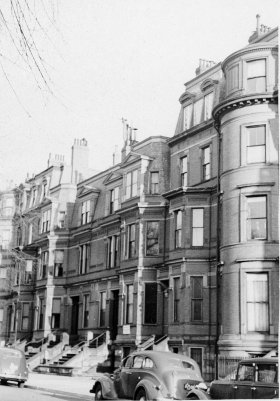 In May of 1922, Frederick Blood applied for (and subsequently received) permission to build a two-car garage at the rear of the house.  The decision was appealed by the neighbors and overturned in September of 1922 by the State Fire Marshall, who found that allowing the garages would create a congested condition in the alleys and a potential fire hazard because of the accompanying storage of gasoline in the tanks of the cars.  A similar application by Anna Johnson, owner of 118 Commonwealth, was overturned in the same decision.

On April 8, 1927, Frederick Blood recorded a deed transferring 124 Commonwealth to James Taylor. The deed was dated March 27, 1922 (the same day he had purchased the house from Julia Lawrence); however, Frederick Blood was the assessed owner from 1922 through 1927. Frederick Blood died in September of 1927.

In 1930, Dr. Claude Louis Payzant, a physician specializing in internal medicine and physical therapy, moved his practice to 124 Commonwealth. He and his wife, Mary (Mamie) Frances (Doner) Moore Payzant, lived in Medford. They had married in January of 1930.

In addition to his medical profession, Claude Payzant was an accomplished artist, specializing in oil paintings of maritime scenes.

Mary Frances Doner was a prolific writer of romantic fiction, writing under the names Julia Ward, Hope Darrow, Virginia Chilvers, Mary Doner Moore, Mrs. Claude Louis Payzant, and others.  Many of her novels were set in Michigan, where she was born.

On September 30, 1933, Mary Payzant purchased the house from Dr. Taylor, who continued to maintain an office there, along with other physicians to whom they provided office space.

By the early 1940s, a window had been inserted between the dormers on the fourth floor. It appears likely that this was done by the Payzants to provide additional light so that the room could be used as a studio by Dr. Payzant.

On March 25, 1944, Mary Payzant transferred the property into both of their names.

Claude and Mary Payzant divorced in 1947. In anticipation of their separation, on February 14, 1947, they transferred 124 Commonwealth to Kenneth Hutchins of Medford.

Claude Payzant married again in August of 1947 to Eleanor (Ellen/Helen) Millicent Yeager. She previously had lived in Newton with her parents, Charles Yeager, a florist, and Ellen (Burke) Yeager.  On September 8, 1947, Claude and Eleanor Payzant acquired 124 Commonwealth from Kenneth Hutchins and made it their home.

In April of 1951, Claude Payzant filed for (and subsequently received) permission to convert the property from a single-family dwelling and doctor’s office to a three-family residence and a doctor’s office, with the doctor’s office on the first floor, and one family each on the second, third, and fourth floors.

In 1952, the Payzants were joined at 124 Commonwealth by Melvin Maynard Johnson, as a lodger. He previously had lived at the Hotel Statler. A widower, he was an attorney and Dean Emeritus of Boston University Law School. A nationally known Masonic leader, he had authored several books on Freemasonry in America.

Claude Payzant died in December of 1953 and Melvin Johnson moved to the Algonquin Club at 217 Commonwealth. Eleanor Payzant continued to live at 124 Commonwealth.

In about 1966, she was joined at 124 Commonwealth by Hugh McDonald Grant, her chauffeur.  He previously had been a lodger at 114 Commonwealth. He had been Melvin Johnson’s chauffeur in the 1940s, when he was the Dean of Boston University Law School, and may have continued as such after Dr. Johnson retired in 1942 and after he and Eleanor Payzant married in 1954.  Hugh Grant and his wife, Rose (Dinan) Davis Grant, had lived in Brookline prior to her death in October of 1959.  He continued to live at 124 Commonwealth until his death in April of 1970.

On November 14, 1988, 124 Commonwealth was purchased from Eleanor Johnson’s estate by Peter A. Latham, an industrial designer, and his wife, Francesca (Harding) D’Elia Latham, an artist. After remodeling the house, the Lathams leased it to others.

In April of 1989, the Lathams applied for (and received) permission to convert the property from a three family dwelling and a doctor’s office into a single family dwelling.

On January 29, 1993, 124 Commonwealth was purchased from the Lathams by Thomas William High and his wife, Nancy Jane (Hughes) High.

124 Commonwealth remained a single-family dwelling in 2021. 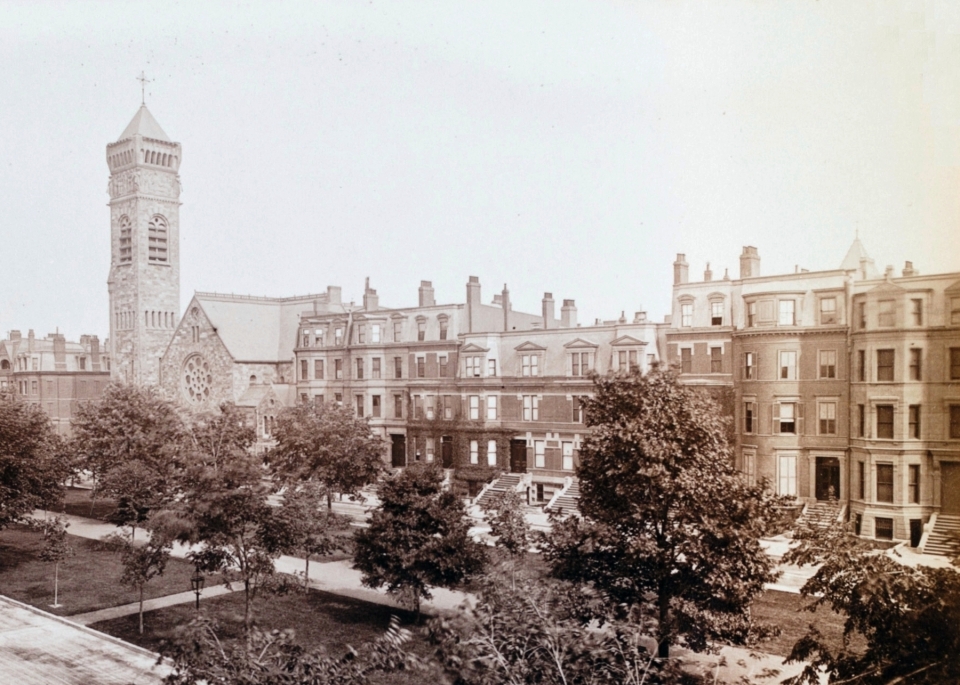