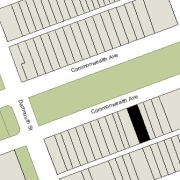 Click here for an index to the deeds for 120 Commonwealth, and click here for further information about the land between the south side of Commonwealth and Alley 435, from Clarendon to Dartmouth.

In May of 1872, Benjamin D. Whitcomb, builder, received a permit to build houses at 118 and 120 Commonwealth (reported in the Boston Evening Transcript on May 18, 1872). Construction started soon thereafter, with 118 Commonwealth built on the 20 foot lot and 120 Commonwealth on the combined 36 foot lot. A July 19, 1872, Boston Traveller article on “present building operations” in the Back Bay reported that the foundations were being laid for the houses.

The Cases previously had owned the 34 foot 8 inch lot to the west, where they had 122 Commonwealth built. On April 25, 1872, the same day they purchased the land for 118-120 Commonwealth, they sold 122 Commonwealth, with the “dwelling house now erecting,” to James Lee and his wife, Frances (Van Dusen) Lee.

James B. Case sold 118 Commonwealth in April of 1875 to William and Elizabeth (Hicks) Harding.

James and Laura Lucretia (Williams) Case made 120 Commonwealth their Boston home. They previously had lived at 52 Boylston. They also maintained a home in Weston, where they owned extensive acreage. In 1889, they built a new home there, Rocklawn, designed by architect Ernest N. Boyden.

The Cases’ four daughters lived with them: Caroline Sumner Case, Mabel Blake Case, Louisa Williams Case, and Marian Roby Case.  Mabel Case died in July of 1883 and Caroline Case married in June of 1888 to James Goldthwaite Freeman, a real estate dealer; after their marriage, they lived at the Hotel Vendome and then at 457 Beacon.

Neither stable was built immediately, however, and over the subsequent years new houses were built across the alley on Newbury.

The stable at 122 Commonwealth was built in the early- to mid-1880s (it is not shown on the 1883 Bromley map, but is shown on the 1885 and 1887 Sanborn maps and on the 1888 and subsequent Bromley maps).  However, when James B. Case sought to construct a similar stable behind 120 Commonwealth, it was opposed by owners of the houses on the north side of Newbury.

In December of 1880, James B. Case filed a petition with the Board of Aldermen to construct a stable behind 120 Commonwealth, the previous approval presumably having lapsed.  As a result of opposition by the neighbors, his application was denied, but he subsequently secured permission to construct a building for storage purposes. William Beals, owner of 125 Newbury, filed legal action to prevent the use of the new building as a stable, arguing that allowing that use would violate the restrictions in the original land deeds from the Commonwealth, which prohibited the use of the land for stables.  In November of 1884, the Supreme Judicial Court dismissed his complaint, noting that, as clarified by the Commissioners on the Back Bay in 1858, the restriction did not prohibit private stables built by land owners for their own use.

James B. Case subsequently built the storage building (it appears on the 1887 Sanborn map) and then, in November of 1889, sought to secure a license from the Boston Board of Health to allow it to be used for a stable.

According to a November 19, 1889, Boston Journal report on testimony before the Board of Health, he explained that he had built the building as a storage building “to show his neighbors what a nice building he was going to erect,” which, he acknowledged “might be construed as a deception by his neighbors.” The neighbors again strongly opposed the application, with attorney Nathan Morse, who lived at 123 Newbury, arguing, according to the Journal, that “the building was put up under a misrepresentation that it was to be used for storage purposes” and that “Mr. Case should be granted no special privilege over his neighbors who had to keep their horses at stables outside” the residential area. WIlliam Beals commented that “he thought it a hard thing that Mr. Case, with wealth at his command sufficient to have a stable at a distance and a telephone connection, should press this nuisance on the neighbors.”

The Board of Health voted to deny the license.

In the Boston Journal’s report on the hearing, it observed that James B. Case had stated that 120 Commonwealth “was of no use to him now unless a stable was built, and used as such.” Following the Board’s adverse decision, the Cases decided to move and, in October of 1890, purchased land at 468-470 Beacon, on the north side of Beacon where stables were prevalent at the rear of the houses. Immediately after purchasing the land, he filed for (and subsequently received) permission to build a stable on the land, and then, having secured the right to build a stable, in June of 1891, he filed for (and received) permission to build houses on the land. By the 1893-1894 winter season, James and Laura Case and their two unmarried daughters, Louisa and Marian, had moved to 468 Beacon and their son-in-law and daughter, James and Caroline Sumner (Case) Freeman, had moved to 470 Beacon.

On March 28, 1895, 120 Commonwealth was purchased from Laura Case by investment banker Frank Everett Peabody. He and his wife, Gertrude (Bayley) Peabody, made it their home with their two children, Everett Peabody and Amelia (Amy) Peabody.  They previously had lived at 173 Newbury.  They also maintained residences at Marblehead Neck and at Snipatuit Farm in North Rochester, Massachusetts.

It appears that, by the time of the Peabodys’ purchase, permission had been granted to use the building behind 120 Commonwealth as a stable.  A March 29, 1895, Boston Globe article on the sale of the house noted that “a handsome brick stable is connected with the property,” and it is shown as a stable on the 1895 Bromley map and the 1897 Sanborn map.  By 1898, however, it had been replaced by a smaller building on the eastern edge of the property, and by 1902 a new two-story structure, connected to the main house with an ell, had been built. The new building was a music room (labeled as such on the 1914 Sanborn map).

From the late 1890s, Gertrude Peabody’s niece, Leslie Tobey, also lived at 120 Commonwealth.  She was the daughter of Gertrude Peabody’s brother-in-law and sister, Phineas Sprague Tobey and Anne (Bayley) Tobey.  Leslie Tobey continued to live with the Peabodys until her marriage to Edward Sawyer in April of 1906. After their marriage, they lived in Stamford, Connecticut.

Everett Peabody died in December of 1900.

Frank Peabody died in September of 1918.  Gertrude Peabody continued to live at 120 Commonwealth with their daughter, Amelia.

After their marriage, William and Gertrude Eaton lived at 120 Commonwealth and also maintained residences at The Bog in Lakeville and in Middleboro. He also owned a large yacht, Taormina, on which the Eatons lived during the summer.

The family sold 330 Newbury in 1922, but continued to own 328 Newbury and maintain it as their garage.

Gertrude Eaton died in April of 1937 and 120 Commonwealth was inherited by her daughter, Amelia Peabody. She was a sculptress. She also maintained a home, Mill Farm, in Dover, Massachusetts, which she had purchased in January of 1925 from Juliet (Higginson) Goodwin, the wife of Frederic S. Goodwin, of 265 Commonwealth.

Her step-father, William Storer Eaton, also maintained 120 Commonwealth as his Boston address until his death in March of 1949.

It is said that Amelia Peabody installed an indoor swimming pool in the basement, but no documentary verification of this alteration has been located.

Amelia Peabody continued to live at 120 Commonwealth and in Dover, and to own 328 Newbury, until her death in May of 1984.

On May 22, 1985, 120 Commonwealth was purchased from Amelia Peabody’s estate by Samuel I. Stone and John W. Koza, trustees of the 120 Comm Realty Trust.

In December of 1985, they filed for (and subsequently received) permission to convert the property from a single-family dwelling into five apartments, including expanding an existing structure on the roof into a penthouse, converting the rear building into a garage, and building a connecting structure between the main building and the garage.

On May 2, 1987, they converted the property into five condominium units, the 120 Commonwealth Condominium.

Below are front and rear elevations of 120 Commonwealth drawn ca. 1873 by Emerson and Fehmer for James B. Case. These are provided courtesy of Historic New England, whose collection also includes additional original architectural drawings of 120 Commonwealth. 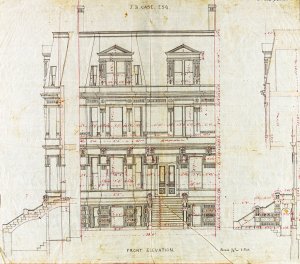 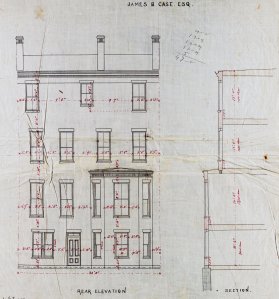