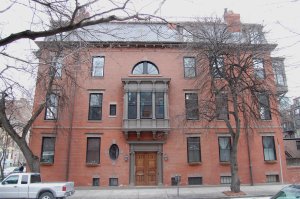 12 Hereford is located on the SE corner of Beacon and Hereford, with 428 Beacon, a vacant lot, to the north, across Beacon, 14 Hereford to the south, across Alley 415, 431 Beacon to the east, and 435 Beacon to the west, across Hereford.

Click here for an index to the deeds for 12 Hereford (433 Beacon), and click here for further information about the land between the south side of Beacon and Alley 415, from Gloucester to Hereford.

On November 13, 1869, Robert Pratt sold the completed house at 433 Beacon to Frederic Sawyer, whose wife, Caroline, had purchased the lots at 427-429 Beacon and built the houses there. The Sawyers lived at 427 Beacon.

By 1872, 433 Beacon was the home of James R. Bayley and his wife Susanna H. (Bancroft) Bayley. They previously had lived in Arlington. James Bayley was a commission merchant and dealer in hay and straw. They continued to live at 433 Beacon in 1873, but had moved to 15 Hereford by 1874.

By 1874, 433 Beacon had become the home of Frederic and Caroline Sawyer. They had lived at 427 Beacon until about 1872, when they moved to 25 Cambridge and then to the Clarendon House hotel at 523 Tremont.

Frederic Sawyer died in September of 1875.  Caroline Sawyer continued to live at 12 Hereford until about 1877.

When they purchased 433 Beacon from Robert Pratt, the Sawyers had mortgaged the property to his father, George Williams Pratt.  By 1877, the mortgage was held by Susan Cabot (Foster Batchelder of Cambridge, the widow of Francis Lowell Batchelder, and on May 14, 1877, she offered the house for “peremptory sale” at public auction through Wheatland & Bird, auctioneers.  A May 16, 1877, Boston Globe article reported that “no bid was offered” that met the amount of the mortgage.  On October 26, 1877, she foreclosed on the mortgage and took possession of the house herself.

They continued to live there during the 1879-1880 winter season, but moved thereafter to 386 Beacon.

On May 26, 1880, 433 Beacon was acquired from Harriet Gray by Louis Charles Benton, a cotton dealer at the same business address as Gorham Gray. He lived in Somerville.

On September 27, 1880, 433 Beacon was acquired from Louis C. Benton by Charlotte M. (Chamberlain) Aldrich Moore, the wife of Dr. Ira L. Moore, a physician. They previously had lived in Revere.

A January 29, 1888, “Table Gossip” entry in the Boston Globe reported that Harold W. Windram had purchased “Dr. Ira L. Moore’s house, 433 Beacon street, and will occupy it for the rest of the winter.”

Harold Windram was a stockbroker and former shoe manufacturer.  He and his wife, Violet K. (Straub) Windram, lived briefly at 433 Beacon but by late 1888 were living in Brookline.  They previously had lived in Reading (where their daughter, Muriel Edna Windram, was born in February of 1884).  Harold Windram and his former wife, Adelaide (Snow) Windram, had lived at 43 Commonwealth in the late 1870s.

Harold Windram took title to 433 Beacon on March 24, 1888, and on the same day sold it to Charles S. Johnson, an organist, pianist, and music teacher, who made it his home.

Charles Johnson was joined at 433 Beacon by carpet and furniture dealer William Henry Browne and his wife, Frances Adelaide (Tuttle) Browne, and by the Brownes’ son-in-law (and William Browne’s business partner) Charles Burleigh Horton. His wife, Ada Frances (Browne) Horton, had died in September of 1886.

They all previously had lived at 65 Appleton.

On January 25, 1890, William Browne acquired 433 Beacon from Charles Johnson. They all continued to live there and the transfer was not recorded until February 9, 1897.

433 Beacon was not listed in the 1898 Blue Book and it appears that it was at this time that the property was remodeled and expanded, and the entrance moved from Beacon Street to Hereford Street (the remodeling is not shown on the 1895 Bromley map, but does appear on the 1897 Sanborn and 1898 Bromley maps). Starting in 1899, the address is shown as 12 Hereford in both the Blue Books and the City Directories.

On May 2, 1898, 12 Hereford was acquired by retired cotton broker Daniel Appleton Dwight. He and his wife, Mary Silsbee (Peele) Dwight, made it their Boston home. They also maintained a home in Dublin, New Hampshire. They previously had lived at 381 Marlborough.

On April 19, 1911, 12 Hereford was acquired by attorney Charles Eustis Hubbard from the Dwights’ daughters, Jane Appleton Dwight, the wife of Franklin Dexter, and Fanny Pickman Dwight. He and his wife, Caroline Dennie (Tracy) Hubbard, made it their home. Earlier that year, they had lived at 443 Beacon.

By the 1913-1914 winter season, 12 Hereford was the home of James Donald Cameron Bradley, a broker, and his wife, Helen (Sears) Bradley.  They had married in July of 1913; and 12 Hereford probably was their first home together.  Prior to their marriage, he had lived at 53 Hereford and she had lived at 12 Arlington with her mother, Sarah (Choate) Sears, the widow of Joshua Montgomery Sears, Jr.  They also maintained a home in Southborough which was built for them by her mother, and which was their primary residence in 1916.  By 1918, they made their Boston home with her mother at 12 Arlington.

On May 5, 1914, 12 Hereford was acquired from Charles Hubbard by Thomas Barbour. He and his wife, Rosamond (Pierce) Barbour, lived in Brookline. Their purchase of 12 Hereford was subject to the lease with the Bradleys, which continued until July 1, 1915, and during the 1914-1915 winter season, while they were waiting to take possession of 12 Hereford, the Barbours lived at 371 Marlborough.

Thomas Barbour was curator of the Harvard Museum of Comparative Zoology.  He later would become the Alexander Agassiz Professor of Zoology at Harvard and, in 1927, would be named director of the museum.  He undertook numerous zoological expeditions throughout the world on behalf of the museum.

In late 1917, Thomas Barbour traveled to Cuba and Haiti on a zoological expedition.  Rosamond Barbour continued to live at 12 Hereford until the fall of 1918, when she went to Cuba to join her husband.  They  did not return to Boston until mid-1920 (having spent the 1919-1920 winter season in Palm Beach), when they purchased and moved to 278 Clarendon.

During the 1918-1919 winter season, 12 Hereford was the home of William Littauer and his wife, Catherine Maria (Manice) Littauer.  Their usual residence was in New York City.  William Littauer was a manufacturer and railroad investor.  He was serving as commander of the Remount Depot at Camp Devons in Ayer, Massachusetts.  By the 1919-1920 season, they had moved to Washington DC.

On July 30, 1920, 12 Hereford was purchased from the Barbours by James Jackson Storrow, III, an electrical engineer, and his wife, Margaret Randolph (Rotch) Storrow. They previously had lived at 175 Bay State Road.

By the 1925-1926 winter season, 12 Hereford was the home of Stanley Henry Sinton (born Sinsheim) and his wife, Edna (Eisemann) Sinton.  They previously had lived at 629 Commonwealth.  They also maintained a home in Beverly.

Stanley Sinton was a wholesale wool merchant in the firm of his uncle, Jesse Koshland.  Stanley Sinton’s father, Henry Sinsheimer of San Francisco, also was a partner in J. Koshland & Company.

On August 16, 1928, 12 Hereford was acquired from James J. Storrow by Jennie G. Knowland. The purchase was subject to the Sintons’ lease, which continued until August 30, 1930.

The Sintons continued to live at 12 Hereford until 1929, when they moved back to San Francisco and 12 Hereford became the home of his first cousin, Robert Joseph Koshland, and his wife, Delphine (Rosenfeld) Koshland. They previously had lived in Brookline.

Robert Koshland also was a wool merchant in his uncle’s firm.

They continued to live there until about 1931, when J. Koshland and Company closed, and they returned to California.

While the Sintons and Koshlands leased 12 Hereford, it had changed hands several times, and on September 11, 1930, had been acquired by real estate dealer Ray C. Johnson.

On May 2, 1931, 12 Hereford was acquired from Ray Johnson by Dr. Maurice Fremont-Smith and his wife, Mary Dixon (Thayer) Fremont-Smith. They previously had lived at 91 Revere.

On August 21, 1951, they transferred the property from both of their names into Mary Fremont-Smith’s name, individually.

They continued to live there until about 1967.

John Havens Thornton was a painter and sculptor, and was a assistant professor of art at the Massachusetts College of Art. They lived sporadically at 12 Hereford and the property was primarily rented to physicians for their medical offices.

On July 12, 1977, Naomi Ann Thornton transferred her interest in the property to her husband.

On February 14, 1985, 12 Hereford was purchased from John Havens Thornton by H & P Associates LP (Bernard M. Hochfeld, Chief Executive Officer). In March of 1985, it applied for (and subsequently received) permission to convert the property from a single-family dwelling and doctor’s office into five apartments.

On September 25, 1985, it converted the property into five condominium units, the 12 Hereford Street Condominium