53 Hereford is located on the NW corner of Hereford and Newbury, with 51 Hereford to the north, 320 Newbury to the south, across Newbury, 52 Hereford (303-305 Newbury) to the east, across Hereford, and 325 Newbury to the west.

53 Hereford was designed by Bradlee and Winslow, architects, and built in 1882 by Vinal and Dodge, masons. It is one of five contiguous houses (45-47-49-51-53 Hereford) they built for speculative sale in association with building contractor George Wheatland, Jr. He is shown as the owner on the original building application for all five houses, dated February 24, 1882. 47-53 Hereford are designed as a symmetrical composition, somewhat unbalanced by 45 Hereford.

The block of Newbury between Hereford and West Chester Park (Massachusetts Avenue) was intended primarily for stables, including private carriage houses and larger public livery stables, and in 1882, when 45-53 Hereford were built, there already were several stables directly across the street, on the south side of Newbury. 53 Hereford was designed with a window-less wall on Newbury, probably to avoid looking onto these stables and to firmly orient 45-53 Hereford in an eastward facing direction, as a residential block of buildings.

The land for 45-53 Hereford was acquired on April 9, 1881, by George Wheatland, Sr., of Salem, from Caleb H. Warner and Charles F. Smith, trustees for the benefit of the creditors of Nathan Matthews. It originally had been purchased by Nathan Matthews on January 2, 1871, from the David Sears family, which held large holdings of Back Bay tidal lands.

The deed to George Wheatland, Sr., included a restriction that only dwelling houses facing Hereford could be built on the land.  The restriction was for the benefit of the owners of the land at 314-320 Commonwealth, which Caleb Warner and Charles Smith had sold in April of 1879 to Sumner R. Mead and to Frank N. Thayer and William H. Lincoln. 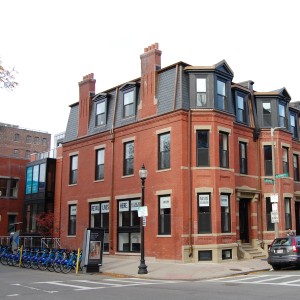 On February 18, 1882, George Wheatland, Sr., sold the land to Warren D. Vinal and Charles A. Dodge, the builders. On the same day, they subdivided the land into five lots and entered into a mortgage with George Wheatland, Jr., on each lot, probably to provide the funds for the construction. In November of 1882, after the houses were completed, Vinal and Dodge sold 45 Hereford and 53 Hereford to individual buyers, and in February of 1883, they sold 47-49-51 Hereford to real estate dealer Brice S. Evans. He sold 51 Hereford in August of 1883, but 47 and 49 Hereford remained unsold, and on April 4, 1884, George Wheatland, Jr., foreclosed on his mortgages to Vinal and Dodge, which had been assumed by Brice Evans, and took possession of the two houses. He sold them later in 1884.

The original lots at 45-53 Hereford were 67 feet deep (east-west) and had a four foot easement at the rear to provide passage and drainage from all five houses to the alley between Commonwealth and Newbury. To the west, behind the five houses, was a lot with a 23 foot 3 inch frontage on Newbury. On April 19, 1886, the individual owners of the houses purchased the portions of this lot behind each of their houses, extending the size of their lots to 90 feet 3 inches. Although the reason for this purchase is not known, it is likely that it was to preclude construction of a stable on this land and to provide a larger buffer between the houses and the stable district. On March 8, 1888, the owners of the five houses agreed to move the easement for passage and drainage to the new western edge of their property and share the cost of a new sewer system at that location. That new drainage was not built, however, and on April 8, 1908, the owners agreed that the 1888 agreement remained in effect and that, until a new sewer was built, continuing to use the old sewer, located about 65 feet west of Hereford, would not constitute an easement over the properties.

Click here for an index to the deeds for 53 Hereford.

On November 4, 1882, 53 Hereford was purchased from Warren D. Vinal and Charles A. Dodge by the trustees of the First Methodist Episcopal Church in Boston, located on Beacon Hill at Temple Street and Ridgeway Lane (also known as Grace Church and the Temple Street Church).

Living with them were their unmarried son, Moses P. Burlen, also a mason, and their son-in-law and daughter, Eben Mann Holbrook and Sarah Syrene (Burlen) Holbrook.  Eben Holbrook was a cider manufacturer.

They all previously had lived at 40 Leverett.

The Burlens continued to live at 53 Hereford  in 1889.  By 1890, they were living at the Hotel Ilkley (Huntington at Cumberland).

By the 1889-1890 winter season, 53 Hereford was the home of Horace Billings and his adopted daughter, Elizabeth G. Billings.  They previously had lived at 323 Commonwealth, where his wife, Sarah Arianna (Sears) Billings, had died in July of 1880. He was a former wholesale leather and hide dealer; his business. Billings & Eaton, had failed in April, of 1889.

Horace Billings died in May of 1905 and Elizabeth Billings moved soon thereafter.

By the 1906-1907 winter season, it was the home of Dr. George W. Spears, Jr., and his wife, Mabel M. (Knight) Spears.  George Spears was a physician and also maintained his office at 53 Hereford.  They previously had lived (and he had maintained his office) at the Hotel La Fayette at 200 Columbus.

George and Mabel Spears continued to live there during the 1907-1908 season, but moved thereafter to 213 Huntington.

On April 20, 1909, 53 Hereford was purchased from J. Sumner Draper by Dr. Robert Soutter, a physician and orthopedic surgeon with offices at 133 Newbury. He and his wife, Helen Elizabeth (Whiteside) Soutter, previously had lived next door, at 51 Hereford, which they continued to own and lease to others. They also maintained a home, Four Winds Farm, in Walpole, Massachusetts.

It appears that it was at about this time that a fourth story penthouse structure was added to 53 Hereford.  The house is shown as three stories on the 1908 Bromley map (the same height as 45-51 Hereford) and as four stories on the 1912 map (one story higher than the other houses). The penthouse was removed as part of the remodeling approved in December of 2017.

Dr. Robert Henry Vose, a physician, who had lived with the Soutters at 51 Hereford, moved to 53 Hereford and continued to live with them until 1913, when the moved to 443 Beacon to live (and maintain his medical office) with Dr. Franklin S. Newell.

James Donald Cameron Bradley, a broker, who also had lived with the Soutters at 51 Hereford, also moved to 53 Hereford. He married in July of 1913 to Helen Sears and they moved to 12 Hereford.

By the 1924-1925 winter season, 53 Hereford was the home of John M. Sutherland, a carpenter, and his wife, Lillian V. (Edgins) Sutherland, who operated it as a lodging house.  In 1924, they had lived and operated a lodging house at 16 Pinckney, and also maintained a home in Winthrop.  They continued to live at 53 Hereford during the 1926-1927 season, but moved soon thereafter to 28 West Cedar.

By 1927, 53 Hereford was the home of Mrs. Margaret Dunbar, who operated it as a lodging house.  She previously had lived at 164 St. Botolph.  She continued to live there in 1928, but moved thereafter to 148 West Newton.

By 1929, 53 Hereford was the home of real estate and business broker Everett M. Myrick and his wife, Marie E. (Greenough) Myrick, who operated it as a lodging house.  They previously had lived in Maine.  They continued to live at 53 Hereford in 1930.

By 1934, 53 Hereford was the home of Mrs. Minna E. (Rasslee) Garvin, the widow of John Garvin, who operated it as a lodging house.   She previously had been a lodger at 32 Fairfield and before that had lived at 455 Beacon.  She continued to live at 53 Hereford until her death in October of 1935.

By 1936, 53 Hereford was the home of Alfred J. White and his wife, Florence E. M. (Plaice) White, who operated it as a lodging house.  They previously had lived in Cambridge.  Alfred White died in April of 1938 and Florence White moved to 106 Gainsborough.

On February 26, 1937, 53 Hereford was purchased from Helen Soutter by Harry Skinner.

On October 20, 1938, 53 Hereford was acquired from Harry Skinner by Culver Louis Tice, a cabinetmaker and former real estate agent, and his wife, Catherine (Power) Tice, who operated it as a lodging house. They previously had lived at 293 Newbury and, before that, at 51 Hereford.  Their daughter, Dorrien June (Tice) Knott, the former wife of Kenneth Woodhouse Knott, lived at 48 Hereford, where she also operated a lodging house.  Culver and Catherine Tice continued to live at 53 Hereford until about 1950.

On October 2, 1950, 53 Hereford was acquired from Culver and Catherine Tice by John Luster Simmons and his wife, Lymena T. (Baxter) Reilly Simmons, who continued to operate it as a lodging house. They previously had lived at 1402 Commonwealth.

On May 1, 1951, 53 Hereford was acquired from John and Lymena Simmons by Dr. Walter Fairfield Provan, a retired dentist, and his wife, Hazel Lillian (Lawrence) Provan. They previously had lived at 20 Hemenway.

Walter Provan died in July of 1953, from injuries resulting from having been hit by an automobile while crossing Newbury. Hazel Provan continued to live at 53 Hereford until about 1956.

On February 15, 1956, 53 Hereford was acquired from Hazel Provan by Maurice Wyman Bickmore, a machinist with the Boston Gear Works, and his wife, Mary L. (Powell) Bickmore. They lived in Dorchester. They continued to operate 53 Hereford as a lodging house. 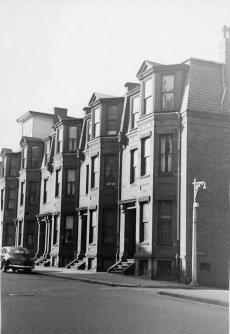 The property changed hands and on April 20, 1963, it was acquired by Dr. Rose (Wexler) Winston, a physician. She and her husband, Dr. Murray R. Winston, also a physician, lived at 133 Commonwealth. She subsequently acquired 47, 49, and 51 Hereford, and operated them as lodging houses.

In August of 1992, Patrick Glynn applied for permission to convert 53 Hereford into eight apartments. He subsequently abandoned the permit and, in January of 1993, filed for (and subsequently received) permission to convert the property into two apartments, one office, and eight lodging units. The application noted that, although the legal occupancy had never been changed from a single-family dwelling, “in part, this building has functioned as, and has been licensed as, a lodging house for many years.” The proposed mixed use was consistent with a decision of the Rent Equity Board issued on December 7, 1992.

In December of 2017, the owners of 45-53 Hereford received permission to renovate the Hereford façades of the buildings, remove the existing penthouse structure at 53 Hereford, install an entrance and windows on the Newbury façade of 53 Hereford, and construct a new building in the former rear yards of the five buildings, with an entrance at 321 Newbury.

53 Hereford remained a combined residential and commercial building in 2022.