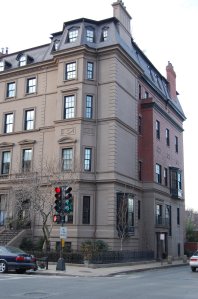 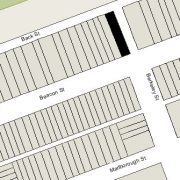 132 Beacon was designed by architect George Snell and built in 1860-1861 for David Sears to be the home of his son and daughter-in-law, Knyvet Winthrop Sears and Mary Crowninshield (Peabody) Sears.

The son of a merchant in the China and East India trade, David Sears managed his family estate. He was an early investor in Back Bay land, having purchased large areas of undeveloped tidal flats prior to the district being filled and developed. He and his wife, Miriam Clarke (Mason) Sears, lived at 42 Beacon, which later became the Somerset Club.

David Sears purchased the land for 132 Beacon on March 20, 1860, from Horace E. Armington, who had purchased it from the Boston and Roxbury Mill Corporation on May 6, 1859.

Click here for an index to the deeds for 132 Beacon, and click here for further information on the land on the north side of Beacon, including the Storrow Memorial Embankment on the Esplanade. 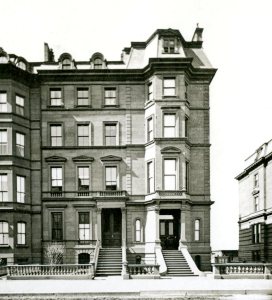 The entrance of 132 Beacon originally was on Beacon Street, reached by a flight of exterior stairs, resulting in a façade similar to 17 Marlborough, where symmetry is achieved by centering the entrance in front of the bay.  As originally built, 132 Beacon also had a single dormer window inserted in the center of the mansard on the front bay.

On September 24, 1860, the Boston Post reported that construction of the house “has just been commenced. It will be four stories in height, with high basement and French roof; … will have a dining room on the first floor, and drawing rooms on the second floor.” The article noted that the house was :”expected to be finished next Fall” and was designed by George Snell.

On November 2, 1861, after the house was completed, Knyvet Sears purchased it from his father and he and Mary Sears made it their home. While the house was being completed, they had lived at 116 Beacon with Samuel Hammond and his wife, Mary Crowninshield (Warren) Hammond. They also maintained a home in Nahant.

Knyvet Sears died in June of 1891. Mary Sears continued to live at 132 Beacon with their daughter, Clara Endicott Sears, an author. 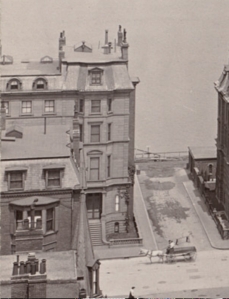 In 1894, Mary Sears built a home, Riverdale Farm, in Groton, Massachusetts. She also continued to own a home in Nahant.

In March of 1930, Clara Sears significantly remodeled the house, including closing the entrance on Beacon and constructing a new Street level entrance on Berkeley.  As part of the remodeling, the dormer window originally located in the mansard was removed, as were the arched windows on either side the former entrance on Beacon.  The remodeling was designed by architects Shepard and Stearns.

Architectural plans for the remodeling — including elevations, foundation plans, floor plans, and framing plans — are included in the City of Boston Blueprints Collection in the Boston City Archives (reference BIN P-75). 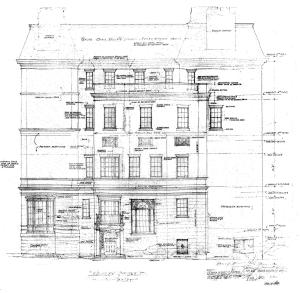 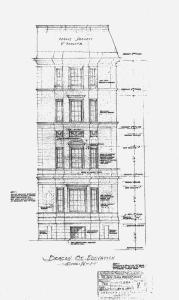 The drawings to the right from the City of Boston Blueprints Collection in the Boston City Archives are renderings of the Beacon Street and Berkeley Street façades, prepared by Shepard and Stearns in connection with the 1930 remodeling for Miss Sears.

Clara Sears continued to live at 132 Beacon until the late 1940s, after which she moved to the Hotel Vendome.  She also maintained a home in Harvard, Massachusetts.

On July 16, 1948, 132 Beacon was acquired from Clara Sears by Fannie I. (Itzkowitz/Asquith) Lang, as trustee of the F. G. S. Real Estate Trust. She was the wife of Clarence E. Lang, a real estate dealer. In the 1930s, she had operated the Fannette Gown Shop at 85 Newbury. 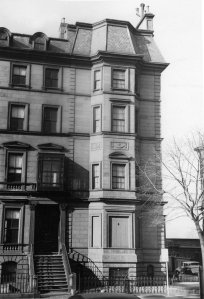 In August of 1953, Fannie Lang filed for (and subsequently received) permission for a one story addition at the rear of the building, increasing the number of units to thirteen. Architectural plans for the addition are included in the City of Boston Blueprints Collection in the Boston City Archives (reference BIN R-150).

On August 31, 1962, 132 Beacon was acquired from Fannie Lang by Emerson College. In October of 1962, it applied for (and subsequently received) permission to convert the house from thirteen apartments into a men’s dormitory and one apartment.

In November of 1964, Emerson College acquired 134 Beacon, which it converted into another dormitory.

On November 15, 2006, 132 Beacon and 134 Beacon were acquired from Emerson College by Beacon Street Development LLC (Harold Brown, manager of record).

In December of 2006, it filed for (and subsequently received) permission to remodel the property and change the occupancy from twelve apartments to eleven residential dwelling units. In March of 2008, it modified the plans to reduce the number of apartments to five.

On October 23, 2008, it converted the property into five condominium units, the Riverside Condominium.

The photograph below (courtesy of the Print Department of the Boston Public Library) shows 132 Beacon and its neighboring houses on Beacon and Berkeley as they appeared ca. 1905, probably taken from the top of Haddon Hall at 282 Berkeley, which was built in 1894. 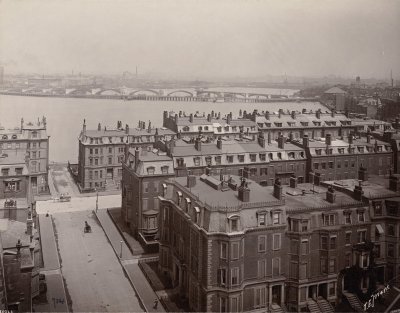