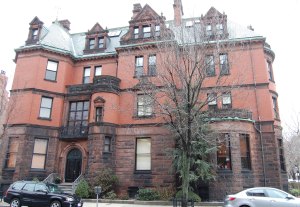 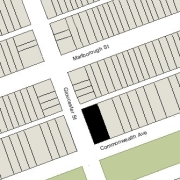 17 Gloucester (275 Commonwealth) was designed by Sturgis and Brigham, architects, and built in 1886-1887 by D. Connery & Co., builders, for banker Eugene Van Rensselaer Thayer and his wife, Susan (Spring) Thayer.

Eugene Thayer purchased the land for 17 Gloucester on January 16, 1886, from Augustus Hemenway. He and his wife, Harriet (Harriett) Dexter (Lawrence) Hemenway, lived at 91 Marlborough. He had purchased the land at 17 Gloucester from William Powell Mason on January 7, 1882, and, according to March 26, 1882, Boston Herald article, “was about to erect an elegant residence.” Instead, he and his wife remained at 91 Marlborough and, in the late 1880s, purchased the house next door at 273 Clarendon and combined it with their home.

William P. Mason had purchased the land at 17 Gloucester as two lots on April 20, 1866, from a real estate investment trust formed by John Templeman Coolidge, Franklin Evans, and Charles Henry Parker. It was part of one of several parcels purchased by the trust on January 29, 1866, from the Boston Water Power Company.

Click here for an index to the deeds for 17 Gloucester, and click here for further information about the land between the north side of Commonwealth and Alley 427, from Fairfield to Gloucester.

By the 1888-1889 winter season, Eugene and Susan (Spring) Thayer had made 17 Gloucester their home. During the previous season they had lived at 151 Commonwealth.  They also maintained a home, Fairlawn, in Lancaster and a home in Pride’s Crossing.

The Thayers continued to live at 17 Gloucester during the 1895-1896 winter season, but moved thereafter to 415 Commonwealth.

By the 1896-1897 winter season, Horatio and Mabel Slater had made 17 Gloucester their Boston home. They previously had lived at 315 Dartmouth. They also maintained a home, The Knolls, in Webster, where several of his cotton mills were located, and in Magnolia, and Mabel Slater also owned homes Bar Harbor and at Pine Bank in Readville in the Hyde Park neighborhood of Boston.

In the late 1890s, Horatio and Mabel Slater were joined at 17 Gloucester by his son, Samuel Slater, and his wife, Enid Dumaresq (Hunt) Slater, who also was Mabel Slater’s sister. Samuel and Enid Slater soon separated and he moved to an apartment at 1091 Boylston. They divorced in 1899 and he re-married to Alice Maud Spry in November of 1900.

Horatio Slater died in August of 1899. Mabel Slater continued to live at 17 Gloucester and at her homes in Webster, Bar Harbor, and Milton. Enid Slater was living with her in Milton in June of 1900, at the time of the 1900 US Census, and probably periodically thereafter; she also maintained a home, Bowling Green, in Bar Harbor.

Mabel (Hunt) Slater was an inventor, filing various patents with the proceeds to go to charity. In 1904, she patented a method of obtaining ice-cooled water from a spigot installed into an ice-box refrigerator, and in 1914, a gauge to show how much ice was left without having to open the ice-box.  She also invented a sleeping bag that doubled as a garment, said to have been used in World War I.

On October 3, 1900, Mabel Slater was injured in a gas explosion at 17 Gloucester. She moved soon thereafter and appears not to have maintained a home in Boston again until the spring of 1913, when she purchased 448 Beacon.

After acquiring the house, the Evanses engaged Peabody and Stearns to design a significant remodeling of the house. In addition to various modifications to the interior, the Evanses also had the front entrance altered to eliminate the conical roof on a two-story stair tower to the right of the entrance and to create an outdoor tiled terrace on the second floor, labeled a “plant bay” on the plans. A wrought iron balcony also was installed above the front entrance, accessed through the original window on the stair landing between the first and second floors, called a “plant balcony” on the plans. 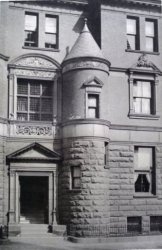 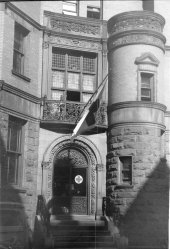 Entrance to 17 Gloucester ca.1942; photograph by Bainbridge Bunting, courtesy of The Gleason Partnership

Plans for the remodeling are included in the Peabody and Stearns Collection in the Boston Public Library’s Arts Department (reference PS/MA.055). The drawings include floor plans for each floor and a drawing of the modified front entrance and interior stairs.

Click here to view the architectural plans for the 1901 remodeling of 17 Gloucester.

While the remodeling was being completed, the Evanses lived temporarily at The Empire at 333 Commonwealth (they were listed at both The Empire and 17 Gloucester in the 1902 Blue Book). They had lived at 20 Gloucester, across the street, during the 1900-1901 winter season. They also maintained a home, Dawson Hall, in Beverly.  In 1909, President Taft leased one of the cottages on the property as a summer home.

Living with Robert and Maria Evans were her mother, Antoinette (White) Hunt, the widow of David Hunt, and Maria Evans’s sisters, Abby W. Hunt and Belle Marinda Hunt. They previously had lived at 308 Beacon.

Robert Evans died in July of 1909 from injuries sustained when he fell from a horse.  Maria Evans continued to live at 17 Gloucester with her mother and sisters.

Antoinette Hunt died in March of 1915, and Maria Antoinette Evans died in October of 1917.  At the time of her death, her obituary in the Boston Globe stated she was “reputed to be one of the 12 wealthiest women in America.”

Abby and Belle Hunt continued to live at 17 Gloucester and to maintain Dawson Hall in Beverly as their second home.

Abby Hunt died in December of 1933.  Belle Hunt continued to live at 17 Gloucester until her death in January of 1936.

With the death of Belle Hunt, 17 Gloucester was inherited from the Hunt estate by the Beverly Hospital Corporation.

On December 31, 1937, 17 Gloucester was acquired by the A. C. Ratshesky Foundation, founded by Abraham C. (“Cap”) Ratshesky and his wife Edith (Shuman) Ratshesky.

Abraham Ratshesky and his brother, Israel, had been wholesale clothiers in the firm founded by their father, Asher Ratshesky. In 1895, they became bankers, founding the United States Trust Company, which specialized in the needs of the immigrant population, providing banking services not otherwise available to them in Boston.  Abraham served as President and Israel served as Treasurer of the bank.  Abraham Ratshesky’s wife, Edith, was the first cousin of Israel Ratshesky’s wife, Theresa.  Abraham Ratshesky had served as a member of the Massachusetts State Senate from 1892 to 1894, and as US Minister to Czechoslovakia from 1930 to 1932.  He was a founder of Beth Israel Hospital in 1916, and led Massachusetts’s efforts to aid the victims of the massive December 6, 1917, explosion in Halifax.  He and his wife lived in an apartment at 65 Commonwealth and at their home, The Birches, in Beverly. 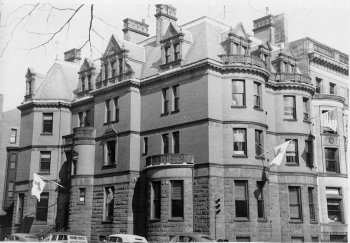 The Red Cross chapter previously had been located at 347 Commonwealth, which also had been donated to them by the A. C. Ratshesky Foundation.  The Red Cross moved to 17 Gloucester in October of 1938.

In October of 1940, the Red Cross added 273 Commonwealth, next door, as an annex to its offices.

17 Gloucester and 273 Commonwealth remained the Red Cross headquarters until about 1971.

On May 20, 1971, 17 Gloucester and 273 Commonwealth were acquired from the American Red Cross and the A. C. Ratshesky Foundation by Andrew Shenk.

On September 12, 1972, Charlotte Goodman took possession of 17 Gloucester and 273 Commonwealth through foreclosure of her mortgage to Andrew Shenk, and sold both properties on September 27, 1972, to Richard George and Mitchell George.

On December 19, 1975, they entered into a mortgage on 17 Gloucester with Lester Werman, Mark R. Werman, Ralph Werman, and Inez (Werman) Levenson.  On June 7, 1976, the Wermans foreclosed on the mortgage and Lester and Mark Werman took possession of the property.  Richard and Mitchell George retained 273 Commonwealth.

On March 10, 1978, Edward Lorden DeMore purchased 17 Gloucester from the Wermans.

In May of 1978, Edward DeMore’s company, Lorden & Co., filed for (and subsequently received) permission to remodel the apartments and reduce the number from eleven to nine.

On June 27, 1978, Edward DeMore converted the property into nine condominium units, the 17 Gloucester Street Condominium.  On June 8, 2018, the condominium unit owners amended the master deed to increase the number of units to ten, reflecting reconfiguration of two previous units into three units.