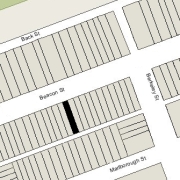 171 Beacon is located on the south side of Beacon, between Berkeley and Clarendon, with 169 Beacon to the east and 173 Beacon to the west.

171 Beacon was designed by architect Luther Briggs, Jr., and built in 1866 by builder and real estate dealer Paul Dean Wallis, one of three contiguous houses (169-171-173 Beacon) he built for speculative sale. He and his wife, Mary Caroline (Pierce) Wallis, lived in West Roxbury.

169 and 171 Beacon form a symmetrical pair, with the entrances centered between two bays extending through the mansard roof. 173 Beacon is of the same design with the entrance on the west side. 173 Beacon appears to have been built in anticipation of there being a companion building at 175 Beacon, forming another symmetrical pair.  However, it was designed by a different architect and, although subsequent remodeling of 175 Beacon has obscured its original design, it does not appear that it was originally a “sister” house to 173 Beacon.

Paul Wallis assembled several parcels of land to create the three 19 foot wide lots for 167-171-173 Beacon. He bought the bulk of the land – a lot with a 50 foot frontage — on May 23, 1866, from Robert Scott. He combined it with two smaller lots he had already acquired on November 17, 1865, a 5 foot 6 inch lot on the west of Robert Scott’s lot which he purchased from real estate dealer Henry Whitwell, and a 1 foot 6 inch strip on the east of Robert Scott’s lot which he purchased from Arthur Lithgow Devens (who had acquired it from Henry Whitwell on the same day). The 1 foot 6 inch strip to the east was part of a parcel originally purchased from the Commonwealth of Massachusetts on September 10, 1859, by George Goss and Norman Carmine Munson, the contractors responsible for filling the Commonwealth’s Back Bay lands. The rest of the land was part of a parcel purchased from the Commonwealth on February 4, 1860, by Norman Munson.

Click here for an index to the deeds for 171 Beacon, and click here for further information about the land between the south side of Beacon and Alley 420, from Berkeley to Clarendon.

On November 28, 1865, Paul Wallis filed a Notice of Intention with the Board of Aldermen to build 169-173 Beacon. On March 12, 1866, the Boston Evening Transcript reported that “three first-class freestone houses are to be erected on the south side of Beacon street, just below the Public Garden, designed by L. Briggs of 20 Joy’s Building, and owned by Mr. P. D. Wallis.  They are to be four stories in height, and the fronts elaborately wrought. The foundations are already laid, and they will probably be completed in early summer, when they will be on the market.”

Completion of the houses may have been delayed by a law suit filed by Andrew Mudge, who owned the property at 175 Beacon. He secured a preliminary injunction to prevent Paul Wallis’s construction of the houses at 169-173 Beacon on the basis that they would violate the restrictions in the land deeds from the Commonwealth of Massachusetts requiring that the houses be set back twenty feet from the street (with exceptions for bays and entrance stairs and porticos). In June of 1866, the Supreme Judicial Court dissolved the preliminary injunction, presumably finding that the design would not violate the setback requirement.

On April 29, 1867, Paul Wallis offered all three houses for sale at public auction. The auction notice published in the Boston Traveller by auctioneers N. A. Thompson & Co. noted that the houses were “just completed” and that “each contain two spacious drawing rooms, large entrance hall, dining room, reception parlor, billiard room and seven chambers, with spacious and pleasant kitchen and laundry accommodations. … Each house has two expensively finished bath rooms for family use, and one for the use of the servants, with large cedar closets, several spacious wardrobe and linen closets, and a water closet in each story, two separate stair cases, inside shutters and blinds, and large plate glass windows back and front.”

The auction notice also indicated that “one of these houses, at least, will be sold to the highest bidder without reserve, and the other two also, should a sufficient competition warrant their being put up.” Only 173 Beacon was purchased at the auction.

On November 1, 1867, 171 Beacon was purchased from Paul Wallis by Mary Buckminster (Jones) Moors, the wife of Joseph Benjamin Moors. They previously had lived at 72 Newton. They also maintained a home in Cohasset.

Joseph Moors was a dealer in shoe findings until about 1867, after which he became an investment banker.

Joseph Moors died in April of 1909.  Mary Moors continued to live at 171 Beacon until her death in December of 1913. Their unmarried sons, Arthur Wendell Moors and John Farwell Moors, lived with her.  Arthur Moors was an investment banker in his father’s firm, J. B. Moors & Co., and John Moors was a broker in his own firm, Moors & Cabot.

Arthur Moors married in June of 1914 to Virginia Fisher, and they made 171 Beacon their home. On December 11, 1915, he acquired the house from his mother’s estate. John Moors continued to live with them until his marriage in May of 1918 to Ethel Lyman Paine; after their marriage they lived at 32 Mt. Vernon.

In 1914, they were joined by their brother-in-law and sister, William Henry Brown and Adelaide (Moors) Brown.  He was a lawyer.  They had lived in Cohasset in 1913 and continued to maintain a home there.  By 1915, they had moved to 304 Beacon.

On October 5, 1949, 171 Beacon was purchased from Arthur Moors’s estate by Mary A. Sullivan. That same month, she applied for (and subsequently received) permission to convert the house from a single-family dwelling into twelve apartments.

On October 31, 1955, 171 Beacon was acquired from Mary Sullivan by Brimmer Realty, Inc., one of several real estate firms owned by Julius Kalman (Kalmanovitz).

In March of 1954, Julius Kalman’s real estate firms had been identified as among the victims of George L. Maitland, who had been indicted for obtaining loans based on fraudulent representations. On February 6, 1956, Julius Kalman committed suicide at his home in Allston. The Boston Globe reported that the suicide was “on the eve of one of the trials growing out of the so-called Maitland loan fraud case” in which he “was to have been a star witness” for the prosecution.

On August 28, 1958, 171 Beacon was acquired from the estate of Julius Kalman by Beacon View Realty Incorporated. It also owned 169 Beacon, which it had acquired in November of 1956.

On December 31, 1965, John V. Kunigenas, treasurer of Beacon View Realty Incorporated, transferred 171 Beacon to himself and his brothers, Robert P. Kunigenas and Michael C. Kunigenas, Jr. On the same day, he transferred 169 Beacon into his own name.

On June 29, 1973, 171 Beacon was acquired from the Kunigenas brothers by Anthony P. Baker, general partner of the Bay Associates Limited Partnership II.

On July 7, 1976, John Kunigenas foreclosed on his mortgage to Anthony Baker and took possession of 171 Beacon. He also continued to own 169 Beacon.

On August 22, 1979, 169 Beacon and 171 Beacon were purchased from John Kunigenas by the Broderick Development Corporation (Frank H. McCourt, Jr., president). On the same day, it also purchased 136 Beacon, 138 Beacon, and 119 Marlborough from him.

On May 30, 1980, Jane S. White, trustee, purchased 169-171 Beacon from the Broderick Development Corporation. On December 29, 1983, she converted the two buildings into twenty-four condominium units (twelve units in each building), the Beacon Associates Condominium.