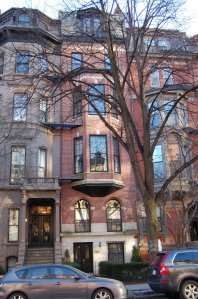 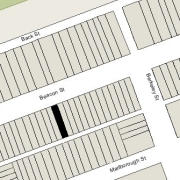 175 Beacon is located on the south side of Beacon, between Berkeley and Clarendon, with 173 Beacon to the east and 177 Beacon to the west.

Andrew Mudge purchased the land for 175 Beacon on January 27, 1866, from real estate dealer Henry Whitwell. It was part of a parcel originally purchased from the Commonwealth on February 4, 1860, by Norman Munson. He and his partner, George Goss, were the contractors responsible for filling the Commonwealth’s Back Bay lands.

Click here for an index to the deeds for 175 Beacon, and click here for further information about the land between the south side of Beacon and Alley 420, from Berkeley to Clarendon.

The houses to the east at 169-171-173 Beacon were built at about the same time by builder Paul Wallis. 169-171 Beacon are built as a symmetrical pair, and it appears that 173 Beacon was built in anticipation of there being a companion building at 175 Beacon, forming another symmetrical pair. However, it was designed by a different architect and, although subsequent remodeling of 175 Beacon has obscured its original design, it does not appear that it was originally a “sister” house to 173 Beacon.

A March 12, 1866, Boston Evening Transcript article reported that “Mr. W. E. Woodward has commenced laying the foundation for a first-class dwelling-house, to be composed of freestone on the south side, between Berkeley and Clarendon streets, on the lot adjoining that of Mr. P. D. Wallis. It is to be four stories in height, and is for a prominent merchant of this city.”

On May 17, 1869, 175 Beacon was purchased from Andrew Mudge by Penfield Bull Goodsell. He and his wife, Julia (Perley) Goodsell, made it their home. They previously had lived at 614 Tremont.

Penfield Goodsell was a physician by training, but in the late 1860s and 1870s was a wholesale dealer in kid gloves and coral goods.  In the late 1860s, he also was publisher of The Saturday Evening Gazette.  By 1880, he had become a physician once again.

Julia Goodsell died in July of 1870.  Penfield Goodsell continued to live at 175 Beacon and, it appears, accepted lodgers.  His adopted son, Evelyn Louis Bonn (who took the name Evelyn Bonn Goodsell), lived with him.

In 1872, attorney Elias Gilbert Merwin and his wife, Anne Mary (Childs) Merwin lived with Penfield Goodsell at 175 Beacon. They previously had lived at 23 Beacon. By 1873, the Merwins had moved to a newly-built home at 126 Commonwealth.

By 1875, Penfield Goodsell’s mother, Eliza (Bull) Goodsell was living with him and Evelyn Bonn Goodsell.

Penfield Goodsell continued to live at 175 Beacon until about 1877, when he (and probably his son) moved to 306 Columbus.  His mother moved to Hartford, Connecticut, at about the same time (she died there in December of 1882).

On June 26. 1877, the Boston Five Cents Savings Bank foreclosed on its mortgage to Penfield Goodsell and sold 175 Beacon to James W. Dunphy, an employee of Roland Worthington & Co., publishers of the Daily Evening Traveller newspaper. On the same day, he transferred it to Roland Worthington’s wife, Abbie (Abby) Bartlett (Adams) Worthington. Roland and Abbie Worthington lived at 9 Hawthorn in Roxbury.

On May 13, 1878, 175 Beacon was offered for “peremptory sale” at public auction at the behest of the Boston Five Cents Savings Bank, which held a mortgage given by Abbie Worthington on the property.  The auction notice by Samuel Hatch & Co., auctioneers, published in the Boston Post, described the house as a “four story French roof, freestone front estate … approached by large and massive freestone steps,” with “reception room, dining room on main entrance floor, elegant drawing rooms and spacious chambers and closet room.”

Real estate dealer John Jeffries was the successful bidder and, on May 23, 1878, the Boston Five Cents Savings Bank and transferred the property to him. On the same day, it was acquired from him by banker Richard Tucker Parker, who made it his home.

Richard Parker was a widower, his wife, Martha (Thorndike) Parker, having died two months earlier, in March of 1878. They had lived at 85 Beacon. He also maintained a home in Beverly Farms. He continued to live at 175 Beacon during the 1891-1892 winter season, but moved thereafter to Dublin, New Hampshire.

On May 10, 1892, 175 Beacon was acquired from Richard Parker by Dr. Orran (Oren) George Cilley, a physician, He and his wife, Mary Jane (Haines) Cilley, made it their home. They previously had lived at 35 Cambridge, where he continued to maintain his medical office. They also maintained a home in Hamilton.

Based on the Bromley maps, it appears that the bay window at 175 Beacon was added in the mid-1890s, while it was the Cilleys’ home.

In June of 1900. at the time of the 1900 US Census, the Cilleys were living in Hamilton, and 175 Beacon was temporarily the home of Ernest Douglas and his wife, Grace (Parsons) Douglas. They had married in October of 1899. He was an organist, composer of liturgical music, and music teacher, and by 1906 was organist and choirmaster at St. Paul’s Episcopal Church in Los Angeles. 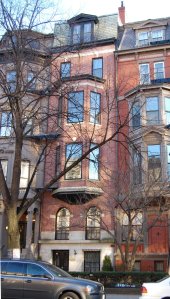 The Douglases had moved by the 1900-1901 winter season, and 175 Beacon was once again Orran and Mary Cilley’s home. They continued to live there until about 1907, after which they made Hamilton their home.

On May 1, 1907, 175 Beacon was purchased from Orran Cilley by Harriet (Denison) Safford, the wife of William C. Safford. They previously had lived at 10 Keswick.

William Safford was an interior decorator (with a studio at 73 Newbury), upholsterer, and furniture manufacturer.

Based on the Bromley maps, it appears that it was while 175 Beacon was owned by the Saffords that the front façade of 175 Beacon was rebuilt, including replacing the brownstone façade with brick and lowering the front entrance to street level.

During the 1915-1916 winter season, 175 Beacon was the home of Harriet Pierce (Weeks) Anthony, the widow of banker Silas Reed Anthony, and their unmarried children, Ruth Anthony and Reed Pierce Anthony.  They previously had lived at 125 Beacon.

By 1917,  the Frothinghams, the Weyburns, and Reed Anthony had moved to 113 Commonwealth, which had been Harriet Frothingham’s home before her first husband’s death and was still owned by her.

By the 1916-1917 winter season, 175 Beacon was the home of Courtlandt Richardson and his wife, Mimi (Carr) Richardson.  He was a stove and furnace manufacturer.  They previously had lived in Brookline. They continued to live at 175 Beacon during the 1918-1919 season, but had moved to New York City by 1920.

On July 7, 1919, Harriet Safford transferred 175 Beacon into her husband’s and her names.

During the 1919-1920 winter season, 175 Beacon was the home of Franklin Warren Hobbs and his wife, Jane Hallett (Whitman) Hobbs. Franklin Hobbs was president of Arlington Mills. By the next season, they had moved to 128 Beacon.

During the 1922-1923 winter season, it was the home of department store heir Harold Leufroi Chalifoux and his wife, Elizabeth Alice (Burrage) Chalifoux.  They previously had lived at 63 Commonwealth.  They also maintained a home in Beverly.  By the 1923-1924 season, they had moved to 367 Beacon.

On August 5, 1923, 175 Beacon was purchased from William and Harriet Safford by Honora Elizabeth Temple (Winthrop) Minot, the wife of Joseph Grafton Minot. They previously had lived at 301 Berkeley.

Joseph Minot was treasurer of the Tudor Company, a shipping merchant specializing in the worldwide shipping of ice.  He had succeeded his father, Charles Henry Minot, in that position.

Honora Minot’s niece, Honora Mason, lived with them until her marriage in May of 1927 to John Lloyd Winston (Honora Mason’s parents, Philip Dana Mason and Mary Emma (Winthrop) Mason, had both died when she was an infant).

The Minots continued to live at 175 Beacon in during the 1927-1928 winter season, but moved thereafter to an apartment at 100 Beacon. They also maintained a home in Santa Barbara.

On March 20, 1929, it was purchased from Honora Minot by Sarah (Lawrence) Slattery, the wife of Rt. Rev. Charles Lewis Slattery. They previously had lived at 290 Marlborough.

Charles Slattery died in March of 1930. Sarah Slattery continued to live at 175 Beacon. In the late 1930s, she became active in the Oxford Group and its successor, Moral Re-Armament, an organization dedicated to international cooperation.

In June of 1948, she applied for permission to convert the house from a single-family dwelling into a music school.  The application was denied and she subsequently abandoned her application.

On September 8, 1948, 175 Beacon was purchased from Sarah Slattery by Cyrene James Smith and his wife, Harriett Mary (Vossahlik) Smith. They lived in Revere, where he was a supervisor of the electrical department in the City of Revere.

Sarah Slattery describes her decision to sell 175 Beacon in her memoirs, I Choose:  “For some time I had been wondering about selling my house at 175 Beacon Street and giving the proceeds to Moral Re-Armament — which I believed was filling a world need so well.  MRA was giving me an opportunity to help in carrying out my husband’s ideals, and an empty, idle house, I felt, was not a good investment.  Except for two years when it had been rented to friends, everything in the house had been simply collecting dust, and many of my possessions could be well used elsewhere.”

On November 22, 1948, Cyrene and Harriett Smith transferred 175 Beacon to their daughter, Harriett Marie Smith, an attorney, and on the same day, she transferred it to her sister, Rennie (Smith) Reda, the wife of Khalil Reda.

The Smith family continued to operate 175 Beacon as a lodging house under the management of Harriett Smith’s sister, Mary Beryl (Smith) Kennedy. She and her husband, Irving John Kennedy, lived at 200 Commonwealth, where they also operated a lodging house.

On April 14, 1955, 175 Beacon was acquired from Harriett M. Smith by John E. Hicks. He and his wife, Anna Louise (Day) Hicks, lived in South Boston. John Hicks was an engineer and Louise Day Hicks was a real investor and operator of lodging houses.

From the mid-1950s, 175 Beacon was leased by Burdett College, which operated it as the Hammond House dormitory.

In July of 1962, John Hicks applied for (and subsequently received) permission to convert the house into a dormitory, apparently legalizing its current status.

175 Beacon remained a dormitory for Burdett College until the early 1970s.

On January 8, 1973, 175 Beacon was acquired from Louise Day Hicks by Peter Swartz, general partner in the Kenley Realty Company, to which he transferred the property on the same day. Kenley Realty Company converted 175 Beacon into twelve apartments, but appears to have continued to operate it as a dormitory for Emerson College until about 1976.

The property changed hands and on February 25, 1980, was acquired by James M. Dangelo, trustee of the Edgemont Realty Trust. On July 2, 1984, he transferred the property to himself and his wife, Michelle F. Dangelo.

On October 31, 1989, he transferred 175 Beacon back to himself as trustee of the Edgemont Realty Trust.

175 Beacon remained an apartment building in 2017.

On August 28, 2017, 175 Beacon was purchased from James M. Dangelo by the 175 Beacon Street LLC (Brendan Feeney and Aidan Feeney, managers of record). In December of 2017, it applied for (and subsequently received) permission to remodel the building into a single family dwelling.