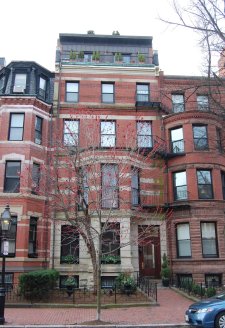 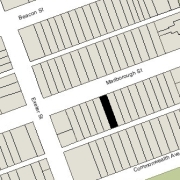 Thomas B. Curtis purchased the land for 184 Marlborough on March 19, 1881, from Naomi (Hawley) De Witt, the wife of John Evart DeWitt. They lived at 290 Marlborough. She had acquired the land in two transactions, a 24 foot lot she purchased on May 20, 1880, from the heirs of James Lawrence, and a 1 foot lot (with the western half of the party wall with 182 Marlborough on it) on November 1, 1880, from Samuel Stillings. Both lots were part of larger parcels originally purchased from the Commonwealth of Massachusetts on May 15, 1872, by Thomas Jefferson Coolidge and James Lawrence.

Click here for an index to the deeds for 184 Marlborough, and click here for further information about the land between the south side of Marlborough and Alley 425, from Dartmouth to Exeter.

On July 23, 1881, the Boston Journal reported that Thomas B. Curtis had been granted a permit for the house, and construction probably started soon thereafter.

Thomas B. Curtis was a physician and medical scholar. He and his wife lived at 70 Chestnut (where he also maintained his medical office) while they were awaiting the completion of 184 Marlborough. He died in December of 1881, a suicide, at 70 Chestnut.

In January of 1882, real estate dealer Alexander S. Porter advertised 184 Marlborough for sale, noting that it was “now in process of building, but not so far advanced as to prevent a change of plan if desired.”

On August 1, 1882, 184 Marlborough was purchased from Thomas B. Curtis’s estate by Albert Edward Touzalin. A widower, he previously had lived in Omaha. He was vice-president of the Atchison, Topeka & Santa Fe Railroad, and later would become president of the Chicago, Burlington & Northern Railroad.

He continued to live at 184 Marlborough during the 1884-1885 winter season, but moved thereafter. In May of 1886, he married again, in Washington DC, to Lida Miller, the daughter of US Supreme Court Justice Samuel Freeman Miller.

On June 19, 1885, 184 Marlborough was purchased from Albert Touzalin by Dr. Charles Dudley Homans, a physician. He and his wife, Eliza Lee (Lothrop) Homans, made it their home. They previously had lived at 90 Boylston. They also maintained a home at Schooner Head on Mount Desert Island (Bar Harbor).

Eliza Homans and their children continued to live at 184 Marlborough. Caroline Homans married in September of 1896 to Neville Priestly, an Indian government railroad official.  After their marriage, they lived in India; she died in May of 1904.

Eliza Homans and John Homans, II, continued to live at 184 Marlborough during the 1896-1897 winter season, but moved thereafter to 315 Marlborough.

On April 1, 1897, 184 Marlborough was purchased from the Homans by Guy Norman. He and his wife, Louisa (Palfrey) Norman, made it their home. They previously had lived at 262 Beacon.

Guy Norman was a stockbroker and later managing trustee of his family’s estate.  In 1898, he enlisted in the US Navy and served as an ensign on the US battleship Iowa during the Spanish-American War.

In January of 1902, the Normans purchased a home on Prince Street in the Beverly Cove area of Beverly.  They also maintained homes in Newport and Washington DC.

The Normans continued to live at 184 Marlborough in the fall of 1904, but from January of 1905 were living in Aiken, South Carolina, and 184 Marlborough was the home of Philip Shelton Sears and his wife, Mary Cabot (Higginson) Sears.  He was a lawyer and trustee, and later would become a noted sculptor.  They previously had lived at 320 Commonwealth. They also maintained a home, The Pines, in Pride’s Crossing.

By the 1906-1907 winter season, the Normans had moved to their home in Beverly.  They also continued to maintain homes in Washington DC and Newport.

On May 31, 1906, 184 Marlborough was purchased from Louisa Norman by retired dry goods commission merchant Samuel Parkman Shaw, Jr., and his wife, Gertrude (Bramwell) Shaw. They previously had lived at 83 Marlborough. They also maintained a home, Redwood, in Lenox.

During the 1911-1912 winter season, the Shaws were living elsewhere and 184 Marlborough was the home of Oliver Willard Mink and his wife, Mabel Gertrude (Tower) Mink. They had married in July of 1911 and 184 Marlborough was their first Boston home together.  Prior to their marriage, Oliver Mink had lived at the Hotel Somerset with his first wife, Susan Ellen (Mahoney) Mink, who died in May of 1910. Mabel Tower had lived at 294 Commonwealth with her mother, Elizabeth (Bangs) Tower, the widow of Sylvester Tower. The Minks and the Towers owned neighboring homes in Manchester, Massachusetts.

Oliver Mink was treasurer of the Ames Shovel and Tool Company and of various other Ames family enterprises.  He formerly was Vice President of the Union Pacific Railroad.

The house was shown as vacant in the 1938 City Directory.

In May of 1938, 184 Marlborough was purchased from the Shaw family by Shirley Clifford Speed, a real estate dealer who converted many Back Bay houses into lodging houses and apartments.

By 1939, it was the home of Elizabeth C. (McGovern) Currier, widow of John Willis Currier, who operated it as a lodging house.  She previously had lived in Newburyport.  She continued to live at 184 Marlborough in 1945, but had moved to 116 Myrtle by 1946.

By 1946, 184 Marlborough was the home of Richard Augustine Morrissey and his wife, Bertha Helen (Richards) Morrissey, who operated it as a lodging house. They previously had been lodgers at 229 Marlborough. He was an elevator operator at the Massachusetts Superintendent of Buildings office.

On November 17, 1947, 184 Marlborough was acquired from Elin Spongberg by Henry Denman Thompson and his wife, Rella Alice (Brown) Thompson, and Rella Thompson’s brother, Patrick Andrew Brown.  On December 15, 1947, Patrick Brown transferred his interest in the property to Henry and Rella Thompson. They lived at 184 Marlborough in 1947. They previously had lived in Cambridge.

By 1950, the property had been converted into apartments. It appears likely that it was at about this time that a penthouse story was added to the building (it was added after to 1942).

In September of 1986, Lower Back Bay Associates filed for (and subsequently received) permission to legalize the occupancy (for which there was no record) as eight apartments. In July of 1987, it amended the application to reduce the number of units to seven.