320 Commonwealth was designed by architect Samuel D. Kelley and built in 1881-1882 by Antoine Xavier and William Welch, builders, for building contractor John W. Shapleigh, one of two contiguous houses (318-320 Commonwealth) in the same design built for speculative sale. He is shown as the owner on the original building permit application for the two houses (one application for both houses), dated September 6, 1881.

John Shapleigh purchased the 48 foot wide parcel for 318-320 Commonwealth on March 21, 1881, from Frank N. Thayer and William H. Lincoln. The parcel was composed of two lots, a 13.41 foot lot to the west that Frank Thayer and William Lincoln had purchased on October 23, 1879, from John Worster (the northeastern portion of an irregularly shaped lot with a 44.75 foot frontage on Commonwealth), and a 34.59 foot lot to the east (the western part of a 62.25 foot lot they had purchased on April 1, 1879, from Caleb H. Warner and Charles F. Smith, trustees for the benefit of the creditors of Nathan Matthews). All of the land was part of a larger tract of land Nathan Matthews had purchased on January 2, 1871, from David Sears, Jr., Frederick R. Sears, and Knyvet Sears.

Caleb Warner and Charles Smith also owned the land on Newbury from the northwest corner of Newbury and Hereford running west 90.25 feet. In their deed selling the 62.25 foot parcel to Frank Thayer and William Lincoln, they included language specifying that only dwelling houses facing Hereford could be built on the land they retained on Newbury. John Worster owned the land on Newbury to the west of the land owned by Caleb Warner and Charles Smith, and in his deed selling the 13.41 foot lot to Frank Thayer and William Lincoln, he included language specifying that, for a period of ten years, no stable would be built on his land on Newbury without the consent of the owners of the land he was selling on Commonwealth.

On July 7, 1883, 320 Commonwealth was purchased from John Shapleigh by Adelaide (Larrabee) Taft, the wife of Edward Augustine Taft.  They previously had lived at 29 Chestnut. Their three children lived with them: Alice Taft, Cora Larrabee Taft, and Edward Augustine Taft, Jr. They also maintained a home at Buzzard’s Bay in Bourne.

Edward Taft was a founder and president of the New York and Boston Despatch Express Company and several other express companies. He also was an organizer and president of the Boston Cab Company which, from mid-1887, owned and operated a large stable at 360-362 Newbury, on the southeast corner of Newbury and Massachusetts Avenue.

Alice Taft married in September of 1892 to Robert Frederick Herrick, a lawyer, of 415 Beacon. After their marriage, they lived in Brookline and then in Milton.

During the 1896-1897 winter season, the Tafts were living elsewhere and 320 Commonwealth was the home of Joseph W. Merrill.  He was a retired wool merchant from Exeter, New Hampshire, where his wife, Louise Clement (Lane) Merrill, had died in March of 1895.  Their five children lived with him: William E. Merrill, Mary L. Merrill, Susan E. Merrill, Jeremiah H. Merrill, and Josephine F. Merrill.

The Tafts resumed living at 320 Commonwealth by June of 1897, when their daughter, Cora, married Charles Egbert Bryan. He was a contract agent with the Chesapeake and Potomac Telephone Company in Baltimore, where they lived after their marriage.

The Merrills were again living at 320 Commonwealth during the 1897-1898 winter season. They continued to lease the house from the Tafts during the next two seasons and were living there in June of 1900, at the time of the 1900 US Census. By the 1900-1901 winter season, they had moved to the  Hotel Vendome.

The Tafts appear to have made their Bourne home their primary residence in the late 1890s, During the 1899-1900 winter season, they were living at the Hotel Kempton at 237 Berkeley. Edward Taft, Jr., entered Harvard in 1900 with the class of 1904.

By the 1903-1904 winter season, the Tafts had moved to New York City and 320 Commonwealth was the home of Philip Shelton Sears and his wife Mary Cabot (Higginson) Sears.  He was a lawyer and trustee, and later would become a noted sculptor.  They previously had lived at 4 Gloucester. They also maintained a home, The Pines, in Pride’s Crossing.

By the next season, they had moved to 184 Marlborough.

On December 26, 1904, 320 Commonwealth was purchased from Adelaide Taft by Helen Taylor (Delano) Howland, the wife of Joseph Francis Howland. They previously had lived in Dorchester. They also maintained a home, Mt. View Farm, in South Paris, Maine.

On July 5, 1905, Helen Howland transferred the property into her name for her lifetime, specifying that after her death, it would be in the name of her husband.

In April of 1907, Harriet Grace (Putney) Jacobs, the estranged wife of Volney Joiner Jacobs, brought a $25,000 alienation of affection suit against Florence Howland. Volney Jacobs had been the Howland family’s chauffeur in 1904 and possibly later, and subsequently became an automobile dealer. He lived with the Howlands at 320 Commonwealth in 1908, but had moved to 224 Newbury by 1909. The suit was settled out of court.

In January of 1910, Florence Jacobs married Arthur W. Foster, a real estate broker. Later that month, she filed a petition to annul the marriage, stating that she had been intoxicated and under the influence of opiates, and did not enter into the marriage voluntarily. In April of 1910, Arthur Foster filed suit against her father and Volney Jacobs, alleging that they had alienated the affections of his wife, causing her to seek the annulment. The annulment ultimately was granted and the alienation suit appears to have been settled.

Florence Howard moved soon after her mother’s death and subsequently married Albert Lodge, an automobile engineer. By 1918, they lived at 18 St. Lukes Road in Allston. 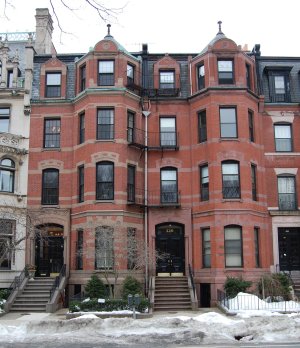 In December of 1931, the Building Department cited Adalyn Sanborn for failing to provide sufficient egress.  It appears she failed to remedy the violation, and she was reminded of the requirement by a letter dated February 1, 1932.

By 1934, the Sanborns had resumed living at 320 Commonwealth and he had also moved his medical offices back there.  Dr. Edward R. Williams also maintained his offices there; he and his wife, Helen Louise (Lutz) Williams, lived in Cambridge.

On April 24, 1940, 320 Commonwealth was purchased from Adalyn Sanborn by Alice J. Sawyer, the widow of Frederick W. Sawyer. She previously had lived at 230 Newbury.

On August 2, 1961, 320 Commonwealth was purchased from Alice Sawyer’s guardians (her nephew, Eastman Tuttle, and her niece, Barbara (Tuttle) Curtin, the wife of Lloyd Curtin, both children of Morris Henry Tuttle and Buelah Mae (Eastman) Tuttle) by real estate dealer Charles Talanian and his wife, Nevart (Semonian) Talanian. That same month, he applied for (and subsequently received) permission to convert the property from a lodging house into ten apartments.