316 Beacon is located on the north side of Beacon, between Exeter and Fairfield, with 314 Beacon to the east and 318 Beacon to the west.

316 Beacon was designed by Cummings and Sears, architects, and built in 1885-1886 by Thomas J. Lyons, builder, as the home of retired tea merchant Edward Royall Tyler and his wife, Jennie Louise (Cory) Tyler.

Click here for an index to the deeds for 316 Beacon, and click here for further information on the land on the north side of Beacon, including the Storrow Memorial Embankment on the Esplanade.

The Tylers were living elsewhere during a portion of the 1890-1891 winter season. A September 26, 1891, Boston Globe article indicated that “soon after his election to the Massachusetts Senate last winter John Simpkins of Cape Cod brought his family to Boston and passed the winter at 316 Beacon st. Here he remained until the middle of June when he decided to return to the Cape for the summer.” John Simpkins was unmarried and his family, as referenced in the article, included one or both of his unmarried sisters, Ruth and Mabel Simpkins. They also maintained a home, Sandyside, in Yarmouth. During the 1892-1893 winter season, they lived at 170 Beacon. In 1894, he was elected to the US Congress and served until his death in March of 1898.

The Tylers spent the summer of 1891 in Intervale, New Hampshire, and then traveled to Europe.

During the 1891-1892 winter season, 316 Beacon was the home of dry goods commission merchant Joseph Sargent, Jr., and his wife, Nellie Louise (McClure) Sargent.  They previously had lived at 133 Commonwealth.  They moved from 316 Beacon by the next season, and by the 1893-1894 season were living at 235 Commonwealth.

Jennie Tyler died in May of 1892 in Nice, France, the result of carriage accident in which Edward Tyler also was injured. After her death, he and their young daughter, Edith Madeleine Tyler (who later took the middle name Royall), moved to 353 Beacon to live with his mother, Martha Willis (Alger) Tyler, widow of John Tyler, Jr.

In her will, Jennie Tyler left the residue of her estate (including 316 Beacon) to Otis C. Weld and Frances E. Welch, trustees of a trust that she and her husband had established on May 8, 1889, to manage their property for their benefit and the benefit of their children. The trust continued to own the house and lease it to others.

By the 1892-1893 winter season, 316 Beacon was the home of wholesale dry goods merchant Joseph Stevens Kendall and his wife, Ellen (King) Kendall.  They previously had lived at 8 Gloucester.  Living with them were their son-in-law and daughter, Richard Fairfax Bolles and Mary (Kendall) Bolles.  Richard Bolles was a banker and stockbroker. They also maintained a home in Cohasset.

The Kendalls and the Bolleses continued to live at 316 Beacon during the 1896-1897 winter season, after which they moved to 305 Commonwealth.

During the 1898-1899 winter season, 316 Beacon was the home of Charles Sumner Hamlin and his wife, Huybertie Lansing (Pruyn) Hamlin. They had married in June of 1898 and 316 Beacon was their first home together. Prior to their marriage, he had lived in an apartment at Haddon Hall at 282 Berkeley. He was an attorney and had served as Assistant Secretary of the US Treasury from 1893 to 1897. In 1902 and 1910, he was an unsuccessful candidate for Governor. From 1913 to 1914, he again served as Assistant Secretary of the US Treasury, and from 1914 to 1915 as the first Chairman of the Federal Reserve Board.

In February of 1899, the Hamlins purchased 2 Raleigh from architect Arthur Little and subsequently made it their home.

During the 1899-1900 winter season, 316 Beacon was the home of Lester Leland and his wife, Frances Eugenia (Converse) Leland. They previously had lived at 1 Raleigh.

Lester Leland was officer of several rubber manufacturing companies, including serving as Vice President of the US Rubber Company and treasurer of the Boston Rubber Shoe Company.

They moved soon thereafter to a new home they had built at 422 Beacon.

During the 1900-1901 winter season, 316 Beacon was once again the home of Edward Royall Tyler and his daughter, Edith, who was introduced into society during that season.  They then traveled around the world together, and resumed living at 353 Beacon with his mother after they returned.

During the 1901-1902 winter season, 316 Beacon was the home of wholesale boot and shoe merchant William Leander McKee and his wife, Bessie (Pardee) van Wickle McKee.  They had married in May of 1901 and 316 Beacon probably was their first home together.  Bessie van Wickle was the widow of Augustus Stout van Wickle, a Pennsylvania coal operator and bank president.  Her daughters from her first marriage, Marjorie Randolph van Wickle and Augustine van Wickle, lived with them.

On January 12, 1904, 316 Beacon was purchased from the Tyler trust by Ada Medora (Whitney) Davis, the wife of George Gilbert Davis, a manufacturer of woolen machinery. They previously had lived at 243 Beacon.  They also maintained a home, The Rocks, in Kennebunkport, Maine.

In 1919 or 1920, they were joined at 316 Beacon by their daughter, Dorothy (Davis) Simpson, the widow of George William SImpson, and their children.  She had been widowed in November of 1918 while living at 342 Beacon, and moved to live with her parents thereafter.

George Davis died in September of 1920 and Ada Davis died in December of 1920.  Dorothy (Davis) Simpson remarried in August of 1921 to David Alexander Gardner and, after their marriage, they moved to her former home at 342 Beacon.

On December 12, 1921, 316 Beacon was purchased from Ada Davis’s estate by her daughter, Madeleine (Davis) Powers, the wife of Dr. George Hermann Powers, Jr., a physician and aural surgeon They previously had lived at 371 Beacon. They also maintained a home in Kennebunkport and (from about 1933) also at Holiday Farm on Elm Street in Medfield, Massachusetts.

In August of 1927, George Powers applied for (and subsequently received) permission to construct a one-story structure at the rear of the property for a laundry and coal storage.

George Powers died in October of 1941.  Madeleine Powers continued to live at 316 Beacon until about 1946.

The house was shown as vacant in the 1947 City Directory.

On June 6, 1947, 316 Beacon was purchased from Madeleine Powers by Benjamin Adroy Buzzell and his wife, Henrietta M. (Schacht) Buzzell. They previously had lived at the Hotel Somerset and, before that, in Belmont. He was sales manager of a wholesale coal and oil company.

Benjamin Buzzell died in July of 1965 and Henrietta Buzzell moved thereafter to Florida.

On March 31, 1970, 316 Beacon was acquired from the S. S. Ganick Corporation by Donald Arthur Flaherty and his wife, Marion Louise (Taylor) Flaherty.  He was a real estate manager and former television news editor. They moved to one of the apartments at 316 Beacon; they previously lived in an apartment at 228 Beacon.

On April 26, 1982, 316 Beacon was purchased from the Flahertys by Jerald R. Feldman, trustee of the Riverside Realty Trust.

On January 13, 1983, he converted the property into six condominium units, the 316 Beacon Street Condominium. 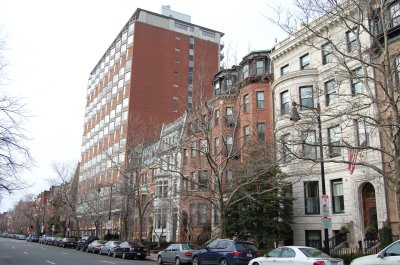