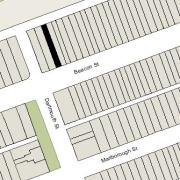 230 Beacon is located on the north side of Beacon, between Clarendon and Dartmouth, with 228 Beacon to the east and 232 Beacon to the west.

Click here for an index to the deeds for 230 Beacon, and click here for further information on the land on the north side of Beacon, including the Storrow Memorial Embankment on the Esplanade.

On May 13, 1864, William Tucker transferred the property into his wife’s name.

On April 1, 1865, 230 Beacon was purchased from Susan Tucker by John Wooldredge. He was a shoe manufacturer in Lynn, where he lived with his wife, Emily (Dunbar) Wooldredge.

On August 15, 1866, 230 Beacon was acquired from Gorham Gray by dry goods commission agent Charles Henry Joy. He and his wife, Marie Louise (Mudge) Joy, made it their home. They previously had lived in Lynn, where they continued to maintain a residence.

In 1870, the Joys were living elsewhere and 230 Beacon was the home of John Murray Glidden and his wife, Anna Maria (Warren) Glidden. They had married in October of 1869 and 230 Beacon probably was their first home together. Prior to their marriage he had lived at 1 Marlborough with his parents, William Taylor Glidden and Katharine Cottrell (Glidden) Glidden.

John Glidden was a partner in his father’s shipping firm of Glidden & Williams, a major owner of clipper ships operating between Boston and San Francisco. After the firm was dissolved in 1877, he became treasurer and then president of the Pacific Guano Company and also was a commission merchant and selling agent for Pacific Guano in partnership with James F. Curtis.

By 1871, the Gliddens had moved to 1 Marlborough to live with his parents and the Joys were living at 230 Beacon once again (their son, John Algeron Joy, was born there in December of 1871).

By 1872, the Joys had had moved to 86 Marlborough and the Gliddens were living briefly at 230 Beacon once again. They moved soon thereafter to 107 Marlborough (they are listed at both addresses in the 1872 City Directory). 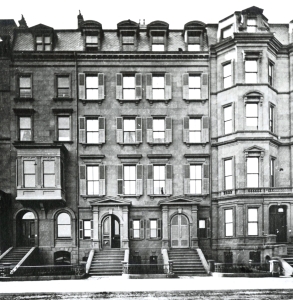 On April 1, 1873, 230 Beacon was acquired from Charles Joy by Elizabeth Jones (Chadwick) Whittier, the wife of Charles Albert Whittier. They previously had lived at 5 West Cedar. They also maintained a home at Buzzard’s Bay.

Charles Whittier was an investment banker and broker with the firm of Lee, Higginson & Co.  He had served in the US Army during the Civil War, and was brevetted a Brigadier General.  In 1898, at the outbreak of the Spanish-American War, he offered his services again, and was appointed Inspector General, accompanying General Merritt to the Philippines.  He subsequently served as Collector of Customs in Manila for several months, and then returned to Boston.

The Whittiers continued to live at 230 Beacon until late 1882, when they moved to a new home they had built at 270 Beacon.

On September 12, 1889, 230 Beacon was acquired from Rosamond Peabody by Georgianna Olivia (Davis) Taylor, the wife of Charles Henry Taylor. They previously had lived at 108 Charles Street.

Charles Taylor was publisher of the Boston Globe.  Between 1891 and 1893, he also served on the staff of Governor William E. Russell, with the rank of Brigadier General.

In April of 1896, Charles Taylor acquired Charles Whittier’s property at Buzzard’s Bay. The Taylors’ sons, Charles H. Taylor, Jr., of 1 Fairfield and William O. Taylor of 231 Beacon built homes nearby in the mid-1890s.

On December 29, 1904, 230 Beacon was acquired from Georgianna Taylor by Leonora (Lewis) Jackson, the wife of Dr. James Marsh Jackson. They previously had lived in an apartment at The Grosvenor at 259 Beacon and, prior to that, at 134 Marlborough. They also maintained a home in Beverly Farms.

James Jackson was a physician and also maintained his medical offices at 230 Beacon.

In January of 1923, Leonora Jackson applied for (and subsequently received) permission to make repairs to the floor timbers on the first, second, third, and fourth floors.  The repairs appear to be as a result of fire damage, but the permit application does not specifically so indicate.

On June 14, 1923, 230 Beacon was acquired from Leonora Jackson by Dr. Luther Dimmock Shepard, Jr. He and his wife, Frances (Conway) Shepard, made it their home. They previously had lived at 16 Keswick. They also maintained a home at Ogunquit, Maine.

Dr. Shepard was a dentist and maintained his offices at 230 Beacon.  Several other dentists also had offices there with him.

When he purchased 230 Beacon, Luther Shepard had given a mortgage to the Old Colony Trust Company as trustee under the will of his mother, Josephine (Bailey) Shepard. On May 7, 1942, he transferred the property to Old Colony in lieu of foreclosure.

The Shepards continued to live at 230 Beacon and he continued maintain his office there until the early 1960s.

Willis Munro was an attorney by training. He had given up law practice to become a forester, but later resumed practice as a trustee. A widower (his wife, Marion Beach (Bogardus) Munro, had died in June of 1935), he lived in Mattapoisett. In June of 1947, he married again, to Ruth William Bowditch. They continued to live in Mattapoisett and, by 1950, made 146 Beacon their Boston home.

On January 9, 1956, 230 Beacon was acquired from Willis Munro by C. Paul Bonin and Everett A. Tisdale, and on April 6, 1956, it was acquired from them by Two Thirty Beacon, Inc., of which Everett Tisdale was the treasurer.

In April of 1964, Edward Britt filed for (and subsequently received) permission to combine 228 Beacon and 230 Beacon, cutting through openings in the party wall on the ground level and fourth floors. He also increased the number of units at 228 Beacon from six to seven, and increased the occupancy of 230 Beacon from two units and a dental office to eight units and a dental office.