235 Commonwealth was designed by architect Obed F. Smith and built in 1882-1883 by Vinal & Dodge, masons, and Laming & Drisko, carpenters, as the home of George Wheatland, Jr., and his wife, Florence Saumarez (Dumaresq) Wheatland. He is shown as the owner of 235 Commonwealth on the original building permit application, dated December 1, 1882.

The land for 235 Commonwealth was part of a larger parcel on which 233-235-239 Commonwealth subsequently were built. It was originally purchased from the Boston Water Power Company on February 16, 1863, by Daniel Davies, Jarvis Dwight Braman, and Grenville Temple Winthrop Braman. Grenville Braman was treasurer of the Boston Water Power Company, Jarvis Braman was his brother (and later president of the company), and Daniel Davies, a housewright and master carpenter, was Grenville Braman’s father-in-law.

By the 1884-1885 winter season, George and Florence Wheatland had made 235 Commonwealth their home They previously had lived at 265 Beacon.

George Wheatland, Jr., was a building contractor and real estate developer.  Bainbridge Bunting’s Houses of Boston’s Back Bay credits him with building more than 140 houses in the Back Bay and Bay State Road neighborhoods between 1867 and 1907. 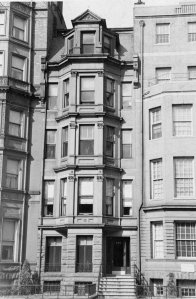 On September 13, 1895, 233 Commonwealth was purchased from George Wheatland, Jr., by Margaret Randolph (Anderson) Rotch, the wife of Abbott Lawrence Rotch. They previously had lived at 265 Commonwealth.

Abbott Lawrence Rotch was a professor of meteorology at Harvard and founder of the Blue Hill Meteorological Observatory.

In December of 1897, he purchased a second home in Milton.

In September of 1911, the Lawrences purchased 182 Beacon. A September 17, 1911, Table Gossip item in the Boston Globe indicated that they would “occupy it as their future home” and were “having their household effects moved into the house and later in the season will come into town from Milton for the winter.” However, they did not move to the house for that winter season but, instead, remained at 235 Commonwealth.

Abbott Lawrence Rotch died in April of 1912.  Margaret Rotch continued to live at 235 Commonwealth during the 1912-1913 winter season, but moved thereafter to 182 Beacon.

Margaret Rotch married again in November of 1919, to Henry Parkman, Jr., an attorney. They lived at 182 Beacon after their marriage.

On June 20, 1922, 235 Commonwealth was acquired from Margaret Parkman by Gerald Arthur Bramwell. He and his wife, Emily Faithful (Ames) Bramwell, made it their home. They previously had lived at 15 Hereford. They also maintained a home in York Harbor, Maine.

A former banker, Gerald Bramwell was treasurer of the American Felt Company.

On January 25, 1935, the Suffolk Savings Bank for Seamen and Others foreclosed on its mortgage to Gerald Bramwell and took possession of 235 Commonwealth.

In April of 1935, John A. McNamara, a real estate manager acting on behalf of the bank, applied for (and subsequently received) permission to convert the property from a single-family dwelling into eleven apartments. In May of 1935, he amended the plans to reduce the number of units to ten.

Among the residents at 235 Commonwealth was Arthur Fiedler, the noted conductor of the Boston Pops Orchestra, who moved there from Cambridge in 1935. He continued to live there until his marriage in January of 1942 to Ellen Mary Bottomley of 165 Beacon.  After their marriage, they lived in Brookline.

On May 29, 1940, 235 Commonwealth was acquired from the Suffolk Savings Bank by Miss Beatrice Antonetta Bortone, one of eight Back Bay properties she acquired from the bank at the same time. She was a bookkeeper with Leopold Morse & Co., wholesale and retail clothiers.  She lived in Wayland with her parents, Anthony C. Bortone and Maria (Larocca) Bortone.  In 1946, she married Albert DeStefano.  After their marriage, they lived in Newton.

On August 28, 1957, 235 Commonwealth was acquired from Beatrice (Bortone) DeStefano by real estate dealer Overton W. Ogilvie, who also acquired most of her other Back Bay properties on the same day.

On March 19, 1959, 235 Commonwealth was acquired from the Saunderses by Richard L. Welch, trustee of the Omega Trust.

On April 6, 1967, 235 Commonwealth was acquired from Richard Welch by Vasilios Poulos. On August 10, 2008, Vasilios Poulos and his wife, Flora Poulos, transferred the property into his name as trustee of the Vasilios Poulos Revocable Intervivos Trust.

235 Commonwealth remained an apartment house in 2019.