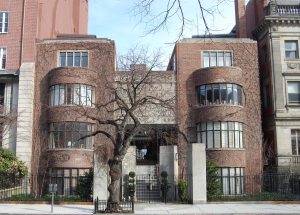 270 Beacon is located on the north side of Beacon, between  Dartmouth and Exeter, with 266 Beacon to the east and 274 Beacon to the west.

270 Beacon was designed by architect Clark F. Merrick and built as a nine unit apartment house with a ten-car parking garage for Albert J. Locatelli. He is shown as the owner on the original building permit application, dated February 9, 1950. In that application, he described the structure as “a new structure with ten-car garage on the street floor for use of occupants of the building. … This story shall also contain four apartments. Above the first story propose to erect two one-story apartments and three duplex apartments…”.

270 Beacon was built on a vacant lot, the site of a townhouse designed by McKim, Mead, and White that later was the location of the University Club and then the May School. The original building was demolished in 1940. Albert Locatelli purchased the lot on March 14, 1950, from Louis J. Binda, an elevator starter at a downtown Boston building who frequently held property for various other owners. He was unmarried and lived in Cambridge. He had acquired the property from the Boston Five Cents Savings Bank in December of 1942.

Click here for an index to the deeds for 270 Beacon, and click here for further information on the land on the north side of Beacon, including the Storrow Memorial Embankment on the Esplanade.

After 270 Beacon was completed, he made one of the apartments his home.

In May of 1954, he applied for (and subsequently received) permission to build two new rooms on the fourth floor level and remodel the penthouse, increasing the occupancy from nine to eleven units.  Rich and Tucker were the architects for the remodeling.  Plans for the remodeling are included in the City of Boston Blueprints Collection in the Boston City Archives (reference BINs R-165 and R-181)

In May of 1958, Albert Locatelli applied for (and subsequently received) permission to remodel the building and increase the number of units from eleven to thirteen.  The remodeling was designed by Clark F. Merrick.  Plans for the remodeling are included in the City of Boston Blueprints Collection in the Boston City Archives (reference BIN R-203).

Albert Locatelli continued to own and live at 270 Beacon until his death in December of 1964.

On January 2, 1973, the property was transferred by the executors of his estate to Joan L. Foley, Richard G. Mintz, and The First National Bank of Boston, as trustees under his will.

270 Beacon was designed by McKim, Mead, and White and built in 1881-1882 as the home of Charles Albert Whittier and his wife, Elizabeth Jones (Chadwick) Whittier, on land he had purchased on February 3, 1881, from the Boston and Roxbury Mill Corporation.

Charles Whittier was an investment banker and broker with the firm of Lee, Higginson & Co.  He had served in the US Army during the Civil War and was brevetted a Brigadier General.  In 1898, at the outbreak of the Spanish-American War, he offered his services again, and was appointed Inspector General, accompanying General Merritt to the Philippines.  He subsequently served as Collector of Customs in Manila for several months.

270 Beacon and 274 Beacon were built at the same time as a harmonious pair, the latter designed by Henry H. Richardson for Francis Lee Higginson, also a partner in Lee, Higginson & Co.

On August 27, 1882, the Boston Globe commented on the two houses, then under construction. “On Beacon street, near Exeter, a pile of brick and brown-stone in a most pronounced and aggravated type of Queen Anne style is assuming somewhat in appearance two houses. They are intended for private residences; the more northerly, with a round tower surmounted by a conical roof, being that of General C. A. Whittier; the other that of Mr. Frank Higginson. They are evidently very costly houses, and, having been months in erecting, bid fair to be as much longer in finishing; at least, quite an army of workmen is busy inside. They indicate clearly the tendency in our cities to expensive, massive and pretentious residences for the wealthy.”

On September 25, 1882, the Boston Globe reported that “General Charles A. Whittier’s palace on Beacon street will be ready for occupancy in about two weeks.” The Whittiers probably made it their home during the latter part of the 1882-1883 winter season. They previously had lived at 230 Beacon (where they continued to be listed in the 1883 Blue Book). They also maintained a home at Buzzard’s Bay.

The Whittiers continued to live at 270 Beacon during the 1891-1892 winter season, but moved to New York City thereafter.

On September 1, 1891, 270 Beacon was purchased from Charles Whittier by Frederick Henry Prince, an investment banker. He and his wife, Abbie Kinsley (Norman) Prince, lived at 190 Beacon.

On December 4, 1891, the Boston Herald described the interior of the house. “The main entrance is into a large hall, and on the ground floor are the parlor, dining room, library, and ballroom. The latter is a splendid apartment in white and gold.  In the front of the second story is an entire suite independent of the rest of the house. It consists of two large bedrooms, each with its bath and a dressing room.  In the rear are two large chambers with bath and dressing rooms.  Guests’ rooms, a nursery and servants’ quarters occupy the third and fourth floors.  In the attic is a miniature theatre or playroom, equipped for amateur dramatics.”

On June 11, 1892, 270 Beacon was acquired from Frederick Prince by the newly-formed University Club of Boston. It held its first formal gathering at the house on October 28, 1892. In its October 29, 1892, article on the event, the Boston Globe commented: “The grand old house at 270 Beacon st., formerly occupied by Gen. Whittier, and which has just been transformed into one of the swellest clubs in the country, was invaded by a gathering of between 1800 and 2000 handsome, brainy men..”.

The Club remained at 270 Beacon until 1926, when it moved to a new building at Trinity Place and Stuart Streets.

On December 3, 1926, 270 Beacon was acquired from the University Club by The May School, which previously had been located at 337–339 Marlborough.

The May School remained at 270 Beacon until 1939, when it merged with the Brimmer School located at 69 Brimmer.

On June 30, 1939, the Boston Five Cents Savings Bank foreclosed on its mortgage to the University Club, which had been assumed by The May School, and took possession of the property. In October of 1940, it applied for (and subsequently received) permission to raze the building.

Architectural drawing of front elevation and first floor plan of 270 Beacon, ca. 1883); from “A Monograph of the Works of McKim, Mead & White: 1879-1915” (The Architectural Book Publishing Company, New York); Plate 3

North side of Beacon, looking east from Exeter, 276 Beacon in the foreground (ca. 1898), courtesy of the Bostonian Society

Rear façades of the houses on the north side of Beacon Street, with 280 Beacon on the right, Jun1904; courtesy of the Boston City Archives