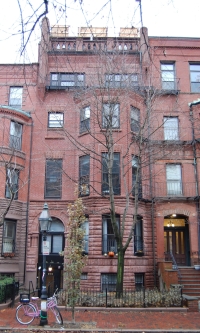 272 Marlborough was designed by architect William Whitney Lewis and built in1883 as the home of iron merchant Nelson Slater Bartlett and his wife, Isabel Hazard (Bullock) Bartlett.

The land for 272 Marlborough was the western 26 feet of a 50 foot wide lot originally sold by the Commonwealth of Massachusetts in 1880 by privately-negotiated sale (not at public auction).  Nelson Bartlett’s mother, Mary Eliza (Meads) Bartlett, the widow of Matthew Bartlett, either was the original purchaser or acquired the right to purchase the land.  She took title to the land from the Commonwealth on October 30, 1884, after the house at 272 Marlborough was completed.  She lived 227 Commonwealth, across the alley from 272 Marlborough, which was built at about the same time.

Click here for an index to the deeds for 272 Marlborough, and click here for further information about the land between the south side of Marlborough and Alley 426, from Exeter to Fairfield.

By the 1883-1884 winter season, Nelson and Isabel Bartlett had made 272 Marlborough their home.  They previously had lived at 118 Marlborough. They also maintained a home in Manchester, Massachusetts.

On May 30, 1885, Mary Eliza Bartlett transferred the 26 foot lot at 272 Marlborough to Isabel Bartlett, and on June 15, 1886, she transferred the 24 foot lot to the east to Nelson Bartlett. He sold it that same day to building contractor Silas Whiton Merrill, who built 258 Marlborough on it.

In 1905, Matthew and Nelson Bartlett, Jr., became stockbrokers in their own firm, Bartlett Brothers & Co.

Elvira Bartlett married in April of 1900 to Edwin Augustus Boardman, III, and after their marriage, they lived with her father at 272 Marlborough.  Prior to their marriage, he had lived at 158 Beacon with his parents, Edwin Augustus Boardman, Jr., and Harriet Smith (DeBlois) Boardman.  Edwin A. Boardman, III, was a naval architect and yacht broker until about 1907, when he became a stockbroker with Bartlett Brothers & Co.

During the 1904-1905 winter season Nelson Bartlett probably was traveling and the Boardmans and his sons were living in an apartment at 409 Marlborough.  During that season, 272 Marlborough was the home of boot and shoe merchant William Howe McElwain and his wife, Helen W. (Merriam) McElwain.  By the 1905-1906 season, they had moved to 169 Bay State Road, where they lived until the 1907-1908 season, when they moved to 390 Beacon.

By the 1905-1906 winter season, 272 Marlborough was once again the Bartletts’ and Boardmans’ home.  They continued to live there during the 1908-1909 winter season.  By 1910, Nelson Bartlett and his son Augustus had moved to Manchester, the Boardmans had moved to Beverly Farms, and Matthew and Nelson, Jr., had moved to Natick.  By 1912, Nelson Bartlett, Jr., was living at 140 Beacon and in Manchester (probably with his father), and Matthew Bartlett was living in Beverly Farms.

By the 1909-1910 winter season, 272 Marlborough was the home of Miss Anne Victoire Adelaide Nelson and Miss Margaret H. Nelson.  They were first cousins (Anne Nelson’s father, Thomas Nelson, was the brother of Margaret Nelson’s father, Rev. Henry Wells Nelson).  They previously had lived in an apartment at 330 Dartmouth, and before that at 508 Beacon.

On December 9, 1913, 272 Marlborough was purchased from Nelson Bartlett by Oliver Willard Mink. He and his wife, Mabel Gertrude (Tower) Mink, made it their home. They previously had lived at 229 Marlborough. They also maintained a home near Singing Beach in Manchester.

Oliver Mink was treasurer of the Ames Shovel and Tool Company and of various other Ames family enterprises.  He was former Vice President of the Union Pacific Railroad.

On June 9, 1958, 272 Marlborough was acquired by Robert W. Dumm and his wife, Mary E. Dumm. Robert Dumm had recently been named dean of the Boston Conservatory of Music. They previously had lived in Ann Arbor, Michigan, where he had operated a piano school. The Dumms may have lived briefly at 272 Marlborough, but by 1959 were living at 1399 Commonwealth in Allston.

The property had been converted into a lodging house without Building Department approval, and in December of 1959 it cited Jack Aifer for failure to provide adequate egress.

On April 15, 1960, 272 Marlborough was acquired from Jack Aifer by Richard H. Rubin and Peter J. Fiumara, trustees of the Petri Realty Trust.

In December of 1960, the Petri Realty Trust filed for (and subsequently received) permission to add the necessary fire balconies to provide egress and to convert the property from a single-family dwelling into a lodging house.

On August 16, 1961, 272 Marlborough was acquired from the Petri Realty Trust by the Anderson Realty Corporation. That same month, it filed for (and subsequently received) permission to convert the property from a lodging house into fifteen apartments.

It probably was at this time that the front entry of 272 Marlborough was lowered to street level and the original top story was significantly remodeled, including changing the fenestration from three evenly-spaced windows into two larger, rectangular windows.

In 1977, Melvin Pollock declared bankruptcy and 272 Marlborough and 258 Marlborough were transferred to William F. Macauley, who was appointed trustee in bankruptcy by the court.

In March of 1980, 272 Marlborough Street Associates filed for (and subsequently received) permission to amend the August 1979 permit to reduce the number of units from eleven to eight.

As of 2016, 272 Marlborough remained assessed as nine units and the legal occupancy remained eight units.