285 Commonwealth was designed by Winslow and Bigelow, architects, and built in 1903-1904 by Ira Hersey, carpenter and builder, as the home of Frederick Thomas Bradbury and his wife Harriet J. (White) Bradbury.  They previously had lived at 197 Marlborough. Harriet Bradbury is shown as the owner on the original building permit application, dated October 31, 1903.

285 Commonwealth replaced the previous townhouse at the same address, built in 1881-1882. It was purchased by Harriet Bradbury on August 31, 1903, and razed soon thereafter.

Click here for an index to the deeds for 285 Commonwealth, and click here for further information about the land between the north side of Commonwealth and Alley 428, from Gloucester to Hereford.

A Boston Transcript news article from 1903 described plans for the new house: “The substantial and costly dwelling to be erected on lot numbered 285 Commonwealth avenue, Back Bay, near Gloucester street, for Mrs. Harriet J. Bradbury, as already announced in the Transcript, will be built of stone and brick and will cost upwards of $60,000 above the land. In dimensions the house will be four-stories high, with a frontage of twenty-six feet and a clear depth of seventy-five feet.  Winslow and Bigelow have the plans in preparation…”.

George Robert White, Harriet Bradbury’s brother, lived with the Bradburys at 285 Commonwealth and also had lived with them at 197 Marlborough. He owned a stable at 354 Newbury and also maintained a home, Lilliothea, at Smith’s Point in Manchester, Massachusetts. He was managing partner in the Potter Drug and Chemical Company (manufacturers of Cuticura soap) and a real estate investor.  George White was a major benefactor of the Museum of Fine Arts and other Boston institutions.

Frederick Bradbury was teller of the Provident Institution for Savings until 1907, when he became treasurer of Potter Drug and Chemical.

Frederick Bradbury died in March of 1919.

George White continued to live at 285 Commonwealth with Harriet Bradbury until his death in January of 1922.  At the time of his death, he was described as the city’s largest individual taxpayer; in his will, he left the City of Boston $7 million for “works of public utility and beauty,” including a memorial in his memory. The sculptor Daniel Chester French was commissioned to design a fountain in his honor at the northwest corner of the Public Garden; it was dedicated in 1924.

Harriet Bradbury continued to live at 285 Commonwealth and at Lilliothea in Manchester until her death in April of 1930.

The house was not listed in the 1931 Blue Book.

On May 21, 1931, 285 Commonwealth was purchased from Harriet Bradbury’s estate by John Coleman Kiley and his wife, Bertha (O’Conner) Kiley. They previously had lived in Chestnut Hill.

John Kiley was a real estate broker and auctioneer. 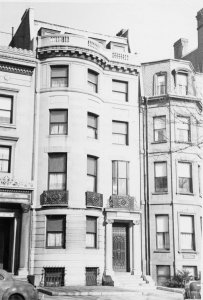 On July 10, 1953, 285 Commonwealth was purchased from John Kiley’s estate by Dr. Philip E. Meltzer. He was an ear, nose, and throat specialist, and a professor at Tufts College Medical School.

In September of 1953, Dr. Meltzer filed for (and subsequently received) permission to convert the property into a single-family residence on the fourth and fifth floors, and medical offices on the lower floors.  He and his wife, Elizabeth (Betty) (Corcoran) Meltzer, subsequently lived in the residential unit.  They previously had lived in Brookline.

Betty Meltzer died in June of 1955.  Philip Meltzer continued to live at 285 Commonwealth.

From the mid-1950s, 285 Commonwealth also was the home of William Guy Foster Holland, the building superintendent, and his wife, Elizabeth (Rittinger) Holland.  They previously had lived in Melrose.

On December 30, 1960, Philip Meltzer transferred 285 Commonwealth to himself and his son-in-law, Milton S. Schwartz, as trustees of the Meltzer Realty Trust.  Milton Schwartz and Joan E. (Meltzer) Schwartz lived in Newton.  He was a lawyer.

Philip Meltzer died in March of 1967.  The property remained medical offices. William and Evelyn Holland continued to live there (and he to be the building superintendent) until their deaths, hers in November of 1968 and his in December of 1971.

On January 24, 1977, 285 Commonwealth was purchased from the Meltzer Realty Trust by Dr. Nevin S. Scrimshaw and his wife, Mary Ware (Goodrich) Scrimshaw. He was a noted expert on nutrition and was a professor at Tufts and at MIT, where he founded the Department of Nutrition and Food Science.

In June of 1977, the Scrimshaws applied for (and subsequently received) permission to convert 285 Commonwealth into two apartments.

On April 30, 1981, they converted the property into two condominium units, the 285 Commonwealth Avenue Condominium.

The original house at 285 Commonwealth was built in 1881-1882 by Keening & Fellows, masons, for real estate dealer Henry Whitwell, for speculative sale. He is shown as the owner on the original building permit application, dated September 28, 1881. No architect is indicated on the permit application.

285 Commonwealth was completed by 1882 but not immediately sold.

On December 18, 1883, it was offered for sale at public auction by auctioneer Samuel Hatch & Co. The auction notice published in the Boston Daily Advertiser described the house as a “large and elegant light stone circular front house … thoroughly built in every respect; parlor, dining room and hall on first floor; finished in the very best manner; parlors in ivory white paint, dining-room in oak; staircase and hall and second story in cherry.”

The house did not sell and appears to have remained vacant for several years.  It was not listed in the 1883-1886 Blue Books.

On January 30, 1886, 285 Commonwealth was purchased from Henry Whitwell by Joseph Brown Thomas, president of the Standard Sugar Refinery. He and his wife, Martha T. (Seran) Thomas, lived on Monument Square in Charlestown.

285 Commonwealth became the home of their son and daughter-in-law, Washington Butcher Thomas and Caroline (Wadleigh) Thomas. They previously had lived at the Hotel Brunswick (southeast corner of Boylston and Clarendon).

Washington Thomas was an executive in his father’s firm and later would become president of the American Sugar Refining Company. A major investor in real estate, in 1895, he built The Marlborough apartment house at 416 Marlborough, and in 1898-1899, he built the Hotel Cambridge at 483-485 Beacon.

Washington and Caroline Thomas continued to live at 285 Commonwealth until September of 1896, when they purchased and subsequently moved to 20 Gloucester.

On March 8, 1897, it was purchased from Washington B. Thomas by Albert Ivins Croll, a yarn dealer and real estate investor. He and his wife, Sarah Helen Merrill (Knowles) Croll, made it their home. They previously had lived at The Abbotsford at 188 Commonwealth, of which he had been one of the original owners.

The Crolls continued to live at 285 Commonwealth during the 1902-1903 winter season. By 1903, Sarah Croll’s mother, Tamzen (Linnell) Knowles, the widow of Nathaniel Knowles, lived with them.  They subsequently traveled abroad and lived at their new home in Manchester, and do not appear to have maintained a home in Boston until the 1905-1906 winter season, when they lived at 183 Marlborough.

On August 31, 1903, 285 Commonwealth was purchased from Albert I. Croll by Harriet J. (White) Bradbury, the wife of Frederick Thomas Bradbury. The Bradburys razed the house and replaced it with a new townhouse.