184 Commonwealth was built first, in 1889 as a six-unit apartment building, by Benjamin F. Denning, mason and builder. The original owner was Frank Warren Smith’s mother, Jane Ludlow (Ross) Smith Palmer. She is shown as the owner on the original building permit application, dated May 16, 1889.

Jane Palmer purchased the land for 184 Commonwealth on April 16, 1889, from Moses W. Richardson, who had purchased it from the Commonwealth of Massachusetts on June 11, 1874.

Click here for an index to the deeds for 184-186-188 Commonwealth, and click here for further information about the land between the south side of Commonwealth and Alley 434, from Dartmouth to Exeter.

Jane Palmer was the widow of Holland Smith, a merchant, who had died in June of 1863, and of Dr. Frederic N. Palmer, a physician.  Dr. Palmer had died in May of 1886, having jumped from the steamer John Brooks, bound for Portland, Maine, with Jane Palmer’s four year old grandson, Wendell Ross Smith (the son of Walter H. Smith and Addie L (Wells) Smith).

Jane Palmer and Frank Warren Smith lived at 226 West Chester Park.  They moved to 184 Commonwealth after it was completed.  They continued to live there during the 1891-1892 winter season, but moved thereafter to Brookline.

Also among the first residents of 184 Commonwealth during the 1890-1891 winter season were author William Dean Howells and his wife, Elinor (Mead) Howells. They previously had lived at the Hotel Vendôme and, in the mid-1880s, had lived at 302 Beacon.  By the 1891-1892 season, they were living at the Hotel Berkeley (southeast corner of Berkeley and Boylston), and soon thereafter they moved to New York City.

186-188 Commonwealth, a matching double-wide building with fifteen units, was built in 1890-1891, by Coon & Hall, masons and builders. The original permit application was filed on May 13, 1890, and proposed a ten family structure at 186 Commonwealth, with Henry McKay and Frank Smith as the owners. That application was abandoned and a new one proposing a fifteen family structure at 186-188 Commonwealth was submitted on June 20, 1890, by Henry McKay, Frank Smith, and Albert Ivins Croll, a yarn merchant. They are shown as the owners on the final building inspection report, dated October 23, 1891.

Although built and operated as one building, 186 Commonwealth and 188 Commonwealth were built for separate owners.

186 Commonwealth was built on land purchased from the Commonwealth on January 19, 1886, by Ellen A. (Larrabee) Johnson, the wife of Henry M. Johnson. It subsequently changed hands and was purchased by Jane Palmer on December 18, 1889. She then sold it to the architects, Henry S. McKay and Frank W. Smith (her son) on May 22, 1890.

The deeds for 186 Commonwealth and 188 Commonwealth included provisions limiting the the size and location of structures built in the rear yards in order to preserve the light and air for the abutting buildings.

On September 21, 1890, the Personal and Social Gossip column in the Boston Herald reported that “Mr. Joseph Lee, proprietor of  the Woodland Park Hotel, will have charge of the new apartment house, the Abbotsford … there has been a great demand for rooms, and nearly all of the desirable apartments have already been engaged.” The Woodland Park Hotel was in Auburndale (Newton) and was a popular summer destination. Joseph Lee continued to operate it along with the Abbotsford. An African-American, he was active in both Boston business and civil rights organizations.

On March 6, 1891, the Boston Herald reported on the opening of “a pretty little hotel … modelled a good deal after the English private hotels, although they accommodate transients, while the Boston establishment will be occupied by permanent guests.”

The article described the new apartment hotel in some detail. “The whole building is in the Italian renaissance style, and the general scheme of coloring is light, the woodwork being done in old ivory. Every room has direct light, and the house is equipped with electric light, bells and elevator. The public halls are finished in gum wood. Kitchen and laundry occupy the basement, the former being fitted with every appliance usual in the larger hotels, but on a smaller scale.

“On the ground floor are the pretty little office, the parlor and the dining room. The latter is finished with a high dado and panelled ceiling. The walls are salmon colored, and the ceiling is Antwerp blue. Seven small tables, each seating six persons, occupy the main room. Two smaller apartments for private parties open out of it. About the fireplaces in the dining room and the parlor is mosaic work of an attractive design.

“There are 21 pleasant suites in the building, some of three and the rest of four, rooms each. Two may be thrown into one large suite, if desired.”

On May 7, 1891, two months after the opening, Frank Smith and Alvin Ivins Croll entered into a ten year lease (commencing September 1, 1891) with Joseph Lee to operate the two properties, including “conducting a general catering business providing meals for the tenants of the buildings [and] transient guests, for preparing dinners, teas, lunches, and suppers on the premises to be served elsewhere or entertaining parties on the premises.”

184 Commonwealth remained a separate building, owned by Jane Palmer and not part of The Abbotsford. On September 15, 1891, the Boston Herald reported that Joseph Lee had leased the first floor of 184 Commonwealth to provide for an enlarged dining room for The Abbotsford “which the increasing patronage of the house demands.” The article noted that the associated “changes are in charge of Messrs. McKay & Smith, architects.”

Jane Palmer entered into a ten year lease (commencing September 1, 1891) with Joseph Lee to operate the dining room at 184 Commonwealth. The agreement was quite specific in its requirements and limitations, providing for the lease of a “suite of rooms numbered ‘one’ in the Apartment House numbered 184 Commonwealth Avenue Boston Massachusetts for the sole purpose of serving therein dinners, teas, luncheons, and suppers to the tenants of the building and to other guests transient and permanent, and for the holding therein of receptions and parties without dancing. And said lessee convenants that he will set only a first class table in said rooms, at prices that will secure none but first class patronage, that he will employ therein none but first class servants, that he will at all times keep perfect order therein and will allow no person of improper character to dine therein, that he will not allow noisy club dinners to be served in said suite and will at all times govern his servants and guests so that perfect order shall be maintained, and that perfect comfort may be had by the regular tenants of the house, that he and his servants and guests except the regular tenants of the other suites in said house, shall enter said suite only through ‘The Abbotsford,’ but that the regular tenants of the other suites in the said house number 184 and their guests shall have access at all times to said suite number 1 for the purpose of obtaining meals therein, through the hallway of said house number 184. And the lessee further covenants that he will at all times during the term hereof keep the lower half of the three windows of said suite which overlook Commonwealth Avenue curtained with suitable materials approved by the said lessor…”.

On April 17, 1892, the Boston Herald reported that Joseph Lee “is financially embarrassed.  His embarrassment is not on account of his business at the Woodland Park Hotel, which has always been a successful house, but on account of his losses at the Abbotsford, his more resent hotel enterprise.  It is expected that the failure will not interfere with the Woodland Park Hotel, which has a first-class reputation, and which is doing a profitable business all of its rooms being engaged for the coming season.” Joseph Lee continued to operate the Woodland Park Hotel until 1896. From about 1897, he and his wife, Christiana (Howard) Lee, lived at 395 Boylston, where he operated a catering business.

On April 25, 1892, Jane Palmer and Joseph Lee agreed to cancel his lease of the first floor at 184 Commonwealth.  It appears likely that his lease with Frank Smith and Alvin Ivins Croll was terminated at about the same time.

William Forsyth acted as leasing agent for the Trust.  In September of 1892, he advertised in the Boston Journal the availability of “very pleasant Suites of 4 to 6 rooms and bath” with “meals served in the Café at very reasonable rates.”

On February 1, 1893, William Forsyth acquired 184 Commonwealth from Jane Palmer. The building was remodeled and combined with 186-188 Commonwealth.  A January 31, 1893, Boston Journal report on the transaction noted that “the changes have converted each floor, which was formerly a large housekeeping suite, into two fine apartments of five rooms on the front and four rooms in rhe rear.  Doing away with the kitchens, the tenants will now use the café on the first floor. All of this work is being done under the supervision of Frank W. Smith, architect, who designed and built the hotel.”

The three buildings remained separate properties but were operated as a single hotel.

On December 20, 1893, the Boston Post reported that John A. Sherlock had assumed management of The Abbotsford; he previously had managed the Union Square Hotel and the Broadway Central Hotel in New York City.

On October 26, 1894, Jane Palmer foreclosed on the mortgage given by William Forsyth and took back possession of 184 Commonwealth. On May 19, 1896, it was acquired by real estate dealer Ernest G. A. Isenbeck, who conveyed it on the same day to Francis William Lawrence, president of the Brookline National Bank and the Globe Gas-Light Company of Boston.

Joseph S. Fay, Jr., was president of the Champion Iron Company and treasurer of the Lake Superior Iron Company, He and his wife, Rebecca Rodman (Motley) Fay, lived at 169 Commonwealth. He died in February of 1912, and 184-186-188 Commonwealth continued to be owned by his estate.

On December 18, 1919, a portion of 188 Commonwealth was destroyed by fire.  At that time, 184-186-188 Commonwealth had a total of 35 apartments.  The repairs to the building were designed by architects Appleton and Stearns, successors to Peabody and Stearns.

In October of 1925, the Fay estate purchased 190 Commonwealth, a single-family dwelling. Thereafter, it remained under the same ownership as 184-186-188 Commonwealth.

In December of 1929, the Fay estate applied for (and subsequently received) permission to cut connecting doors between 188 and 190 Commonwealth.  Although it had been joined with 188 Commonwealth, 190 Commonwealth appears to have remained a single-family dwelling during most of the 1930s.

By 1940, A. M. Sonnabend Properties applied for (and subsequently received) permission to change the zoning status of the property from an apartment hotel to an apartment house, and also to increase the number of units in 184-186-188 Commonwealth from 35 to 44.

The property subsequently changed hands and on June 20, 1952, was purchased by Murray R. Fine, trustee of the Abbotsford Realty Trust. In March of 1954, he filed an affidavit with the Building Department verifying that the occupancy of 190 Commonwealth was ten units when he purchased the property, and had been leased as such ever since. 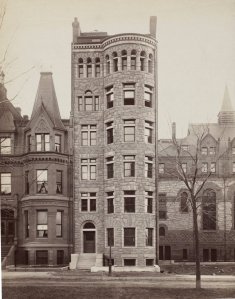