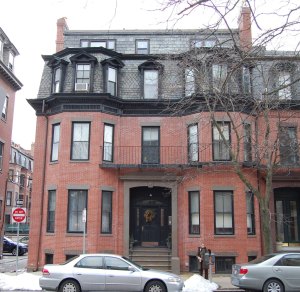 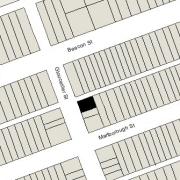 3 Gloucester was designed by architect Frederic H. Moore and built in 1872 by Joseph A. Martin, carpenter, one of three contiguous houses (3-5-7 Gloucester) with brick façades. 3 and 5 Gloucester were both built with three stories plus basements. 7 Gloucester either was built with four stories plus a basement or was remodeled soon after it was built to add a fourth story (it is shown as one story higher than 3-5 Gloucester on the 1887 Sanborn map).

3-5-7 Gloucester were built for building contractor Samuel Tarbell Ames, three of five houses at the northeast corner of Marlborough and Gloucester that he built at about the same time for speculative sale. The other two, at 321-323 Marlborough, also were designed by Frederic H. Moore but with brownstone façades and were built ca. 1873.

The houses at 3-5-7 Gloucester were built on land owned by the estate of Joshua Stetson, with a depth of 54 feet on Marlborough. Samuel T. Ames and Frederic Moore initially planned to build four houses on the land. The original permit specified four brick buildings, each 23 feet by 39 feet in dimension, and a July 19, 1872, Boston Traveller article on “present building operations” in the Back Bay commented that “the walls are nearly up for a block of four brick houses, with freestone trimmings, for Mr. F. H. Moore.” Ultimately, three houses were built (the 1874 Hopkins map and 1883 Bromley map show 3 Gloucester being built on two lots; this is not reflected, however, in the deeds for the land).

On February 1, 1873, after the houses were completed, Samuel T. Ames and Frederic H. Moore purchased the land from the Stetson estate. They sold 3 Gloucester and 5 Gloucester to individual buyers; 7 Gloucester became the home of Samuel Ames and his wife, Mary Hartwell (Barr) Ames. 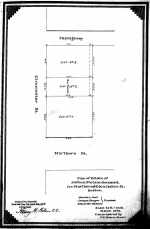 The original deeds for 3 Gloucester and 5 Gloucester included easements at the rear of the properties providing for a three foot passageway to permit passage and drainage from 3-5-7 Gloucester to the alley. When the owners of the houses purchased the additional three feet of vacant land adjoining 323 Marlborough, they also agreed to move the easement three feet to the east, so that it remained at the eastern edge of their properties.

All of the land on which 3-5-7 Gloucester and 321-323 Marlborough were built was part of one of several parcels originally purchased from the Boston Water Power Company on January 29, 1866, by a real estate investment trust formed by John Templeman Coolidge, Franklin Evans, and Charles Henry Parker. The trust had subdivided the property into lots, which it sold to investors and builders, who then frequently resold the lots to others.

Click here for an index to the deeds for 3 Gloucester, and click here for further information about the land between the north side of Marlborough and Alley 416, from Fairfield to Gloucester.

On July 23, 1873, James Henry Read, treasurer of the Boston Ice Company, purchased Samuel T. Ames’s one-half interest in 3 Gloucester.  As discussed above, Samuel Ames owned the lot to the east and on August 1, 1873, he sold James Reed and Frederic Moore (who continued own the other one-half interest in 3 Gloucester) a three foot wide strip at the rear of 3 Gloucester, increasing the depth of their lot from 54 feet to 57 feet.

On September 28, 1874, 3 Gloucester was offered for sale at public auction.  The auction notice by Samuel Hatch & Co., auctioneers, published the day of the auction in Boston Traveller, described the property as “a beautiful, new, octagon front 3-story brick and freestone dwelling house.”   It noted that the “halls and stairways are dadoed in black walnut panels” and that on the “main entrance floor is a drawing room, reception and dining room, with large china closet.” The kitchen, a billiard room, store room, and servants’ room were located in the basement.  The upper floors included “a family, sitting and dressing room, 7 large chambers and servants’ rooms, trunk room, &c., &c.” There were “painted walls and frescoed ceilings over the house.”

On September 30, 1874, the Boston Globe reported that the successful bidder for 3 Gloucester had been real estate dealer Eben Sears.  It was not conveyed to him, however, but rather James Reed purchased Frederic Moore’s one-half interest, thereby gaining ownership of the entire property.  The deed was dated September 28, 1874, the day of the auction, but was not recorded until January 8, 1876.  It appears that auction may have been an expedient means for Frederic Moore and James Reed to establish a value for the property and, thereby, determine a price for Frederic Moore’s interest, with Eben Sears acting as their joint representative. 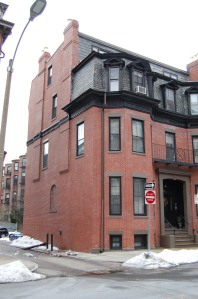 By 1875, James Reed and his wife, Martha Ann (Wesson) Reed, made 3 Gloucester their home.  They previously had lived at 64 West Cedar.

Martha Reed died in February of 1896, and James Reed died in October of 1896. After their deaths, James Reed, Jr., moved to 6 Gloucester to live with Charles and Martha Morss.

On March 23, 1897, 3 Gloucester was purchased from the Reeds’ three children by attorney Thomas Russell. He and his wife, Laura (Parks) Russell, made it their home. They previously had lived in an apartment at 409 Marlborough.

In May of 1899, they purchased a home in Plymouth from his sister, Lydia Goodwin (Russell) Allen. She and her husband, Roger Newton Allen, lived at 163 Beacon.

The Russells continued to live at 3 Gloucester during the 1918-1919 season, but moved thereafter to 277 Clarendon.

On June 9, 1919, 3 Gloucester was purchased from Thomas Russell by Charlotte (Hemenway) Denny, the wife of by Dr. George Parkman Denny, a physician. They previously had lived at 273 Clarendon with her parents, Augustus and Harriet (Lawrence) Hemenway, while he served in the US Army medical corps.  Prior to that, they had lived at 285 Marlborough.

Dr. Denny initially maintained his office at 3 Gloucester, but had moved it to 66 Commonwealth by 1925.

They continued to live at 3 Gloucester until about 1937, when they moved to an apartment at 65 Commonwealth. They also maintained a home in Manchester, Massachusetts.

On July 3, 1937, 3 Gloucester was acquired from Charlotte Denny by Virginia (Wilson) Lavalle, the wife of John W. Lavalle, Jr. He was a portrait and landscape artist with a studio at Fenway Studios at 30 Ipswich.

John and Virginia Lavalle had married in September of 1932.  After their marriage, they had lived in Cambridge and then at 353 Marlborough with his mother, Alice Cornelia (Johnson) Lavalle. His four children by his first marriage, to Ellen Tufts (who died in January of 1932), lived with them: Alice Lavalle, Mary Dean Lavalle, John Edward Lavalle, and Ellen (Elaine) Lavalle. 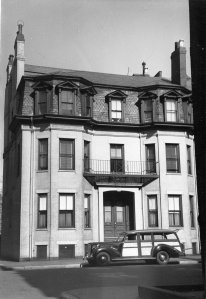 In August of 1937, John Lavalle applied for (and subsequently received) permission to add a fire escape to the rear of 3 Gloucester (the house at 353 Marlborough had neither a fire escape nor fire balconies).

John and Virginia Lavalle divorced in the mid-1940s and he moved to New York.

Virginia Lavalle continued to live at 3 Gloucester.  Her daughter, Virginia, and probably her step-son and daughter, John and Elaine, lived with her.

Virginia Lavalle also accepted lodgers, among them (from about 1946) was Millard B. Gulick, an architect. He previously had been a lodger at 116 Marlborough. He continued to live at 3 Gloucester until his death in March of 1956.

In February of 1950, Virginia (Wilson) Lavalle married again, to Huntington Wolcott Frothingham, principal assessor of the City of Boston. After their marriage, they lived at 3 Gloucester.

They continued to live there in 1956, but had moved to an apartment at 308 Commonwealth by 1957. She continued to own 3 Gloucester and lease it to others.

In 1956, 3 Gloucester became the home of Dr. Girolamo Vitelli, consul general for Italy, and his wife, Maria Giula (Senni) Vitelli.  They previously lived in Belgrade, where he had served in the Italian embassy.  They continued to live at 3 Gloucester until the fall of 1958, when he was appointed to the Italian mission to the United Nations and they moved to New York City.

Virginia Frothingham died in 1958, and on October 29, 1958, 3 Gloucester was purchased from her estate by real estate dealers Stuart H. Hastings and Joseph A. Gautreau.

In November of 1958, they applied applied for (and subsequently received) permission to convert the property into eleven apartments.  The previous use is stated as “apartments” which appears not to have been the case.

On July 30, 1959, 3 Gloucester was acquired from Stuart Hastings and Joseph Gautreau by Willis Frank and Sherman I. Frank, trustees of the Willshire Realty Trust.

The property changed hands and on August 1, 1978, was acquired by Robert I. Weisberg and R. Bruce MacDougall, trustees of the Three Gloucester Street Realty Trust.